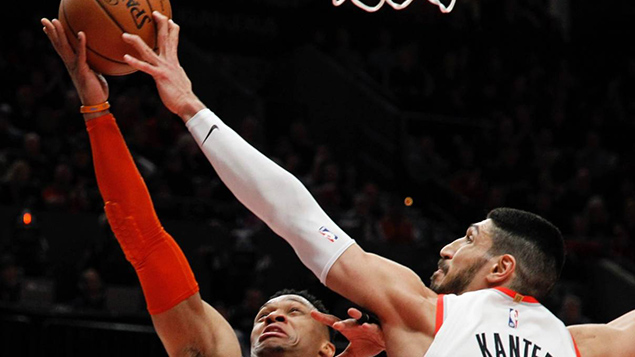 Steven Adams made an impact, but not as much as Enes Kanter in game 1 of the Western Conference first-round NBA playoff series between the Oklahoma City Thunder and Portland Trail Blazers.

Kanter backed up point guard Damian Lillard's game-high 30 points with 20 points and a career playoff-high 18 rebounds as the third-seeded Blazers opened their series against the No 6 Thunder with a 104-99 victory on Monday (NZT).

More to the point the former OKC big man outduelled his close friend, former team-mate and fellow 'Stache brother Adams to claim first blood in what should be an intriguing back and forth between the two in this series.

The 25-year-old New Zealander had a solid game himself, with 17 points on 8-of-14 shooting to go with 9 rebounds (6 at the offensive end) and 3 steals. He had 11 of those points in the opening quarter.

The victory not only put the Blazers up 1-0 in the best-of-7 series, but snapped a 10-game playoff losing streak for the Portland club. The Thunder have now also lost 10 straight road post-season games.

CJ McCollum added 24 points for the Blazers, while Russell Westbrook had 24 points, 10 assists and 10 rebounds for his ninth career postseason triple-double for the Thunder. Paul George, who was a game-time decision because of a sore shoulder, added 26 points and 10 rebounds but was just 8 of 24 from the field and 4 of 15 from beyond the arc.

Portland led by as many as 19 points in the first half, but the Thunder pulled within 80-77 early in the fourth quarter. Oklahoma City couldn't get closer and Lillard hit a 30-footer to extend the Blazers' lead to 89-81 with 6:38 left.

Westbrook appeared to hurt his right knee or ankle and grimaced while trying to walk it off. Trainers attended to him on the bench at the next timeout but he returned and his layup closed the gap to 91-87 with just under 4 minutes left.

Oklahoma City got within 93-92 on George's 3-pointer, but Lillard answered with another long 3 to keep the Blazers ahead. Al-Farouq Aminu made two free throws with 2:09 left to extend Portland's lead to 98-92.

George made a 3-pointer with 8.2 seconds remaining to get the Thunder within 100-97 but Portland hung on.

It was the first post-season meeting between the teams since the Thunder moved from Seattle to Oklahoma City.

Oklahoma City beat the Blazers in all four meetings this season, including a heated 129-121 overtime victory on March 7.

The Thunder have not gotten past the opening round of the playoffs for the past two seasons.

George, nursing a sore right shoulder, was just 1 for 6 from the floor in the opening quarter and never got going as he struggled from the field throughout.

McCollum missed 10 games down the stretch with a left knee strain and had only played in two games since returning. But he started and hit his first two 3-point attempts.

The Blazers' hopes for post-season success were dealt a blow last month when center Jusuf Nurkic (averaging15.6 points, 10.4 rebounds) was lost for the season with a broken left leg. But Kanter, signed just before the All-Star break after being waived by the New York Knick, has proven ad admirable fill-in.

Portland jumped out to a 26-15 lead early on McCollum's third 3-pointer. Portland went on to lead the opening quarter by as many as 17 points, paced by Lillard with 12 points. The Thunder did not make any of their six 3-point attempts, while Portland was 7 of 10.

Seth Curry made consecutive 3-pointers but the Thunder rallied in the final six minutes of the half to trail by just 54-48 at the break. But they still struggled from 3-point range, making just two of 18 attempts. George was 1 of 8 from the perimeter.

There was simmering tension between the teams. Terrance Ferguson and McCollum had a heated exchange in the second quarter, earning technical fouls. Ferguson earned his third foul and headed to the bench.

Westbook's layup got the Thunder within 64-60, but he collected his fourth foul late in the third and went to the bench. The Blazers went into the fourth quarter with a 76-69 lead.

Game 2 is back at the Moda Centre on Wednesday (NZT).