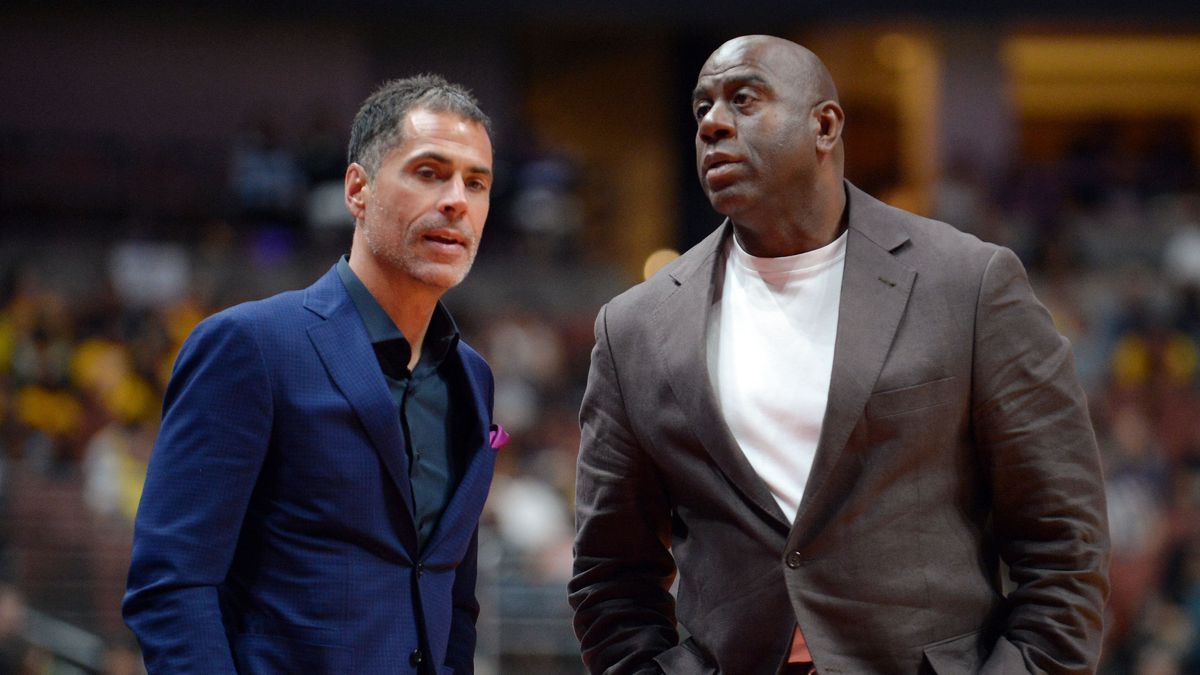 Magic Johnson just can’t stop tampering. As if it’s in the fiber of his DNA, the Lakers’ legend and team president has been connected to talking to more star players on other teams than any other executive in the NBA.

On Monday, the league announced it would investigate any potential tampering with 76ers rising star Ben Simmons, due to Johnson revealing that Simmons reached out to ask him for advice on his game this upcoming summer. The Lakers issued a statement clarifying the situation, saying the Sixers sent them an e-mail, asking if Simmons could talk to Johnson about his career. Lakers GM Rob Pelinka responded with an e-mail to Sixers GM Elton Brand, saying Johnson could only talk to Simmons with written pre-approval from Philadelphia.
This is the fourth instance Magic’s Lakers have been in the spotlight for the same reason, along with countless other behind-the-scenes moments that have rival teams grumbling.
Johnson is relatively new in this role — he hasn’t even been Lakers president for a full calendar year. But the Lakers had an organizational meeting in June to warn about tampering, a meeting Magic Johnson led.
About a month ago, Simmons reached out to the Lakers. He wanted to get better, and as a 6’9” point guard, there’s no one better to learn from than Magic Johnson.

Magic said yes, but Simmons had to get authorization from the 76ers and the NBA. That’s according to Johnson himself, who spilled the beans before an ABC game against Philadelphia on Sunday.
Simmons spoke to media on Monday and said he just wanted to learn from a Hall fo Fame player who’s been in his shoes before.

There was already a backdrop of connection between Simmons and the Lakers. Simmons:

Idolizes LeBron James
Is represented by Rich Paul, who also represents LeBron James and Anthony Davis
Doesn’t always mesh well with Joel Embiid on the court.
Becomes a free agent in 2020.
But nobody would be trying to connect those dots if Johnson didn’t out himself on Sunday. It’s not farfetched for the NBA to be looking into this. It actually makes a ton of sense.

This one was wild. In his early days with the Lakers Magic went on Jimmy Kimmel Live! and literally recruited Paul George to the Lakers
It’s even more wild watching it months after the fact. Johnson played out a hypothetical scenario in which he bumps into George on vacation:

It’s even more wild watching it months after the fact. Johnson played out a hypothetical scenario in which he bumps into George on vacation

“No we’re gonna say hi because we know each other. I just can’t say, ‘Hey, I want you to come to the Lakers.’ Even though I’m gonna be wink-winking like,” he says, before winking twice, then laughing. “You know what that means, right?!”

Then he dapped Jimmy Kimmel up, winked into the camera some more, then gestures to come here.

Johnson actually wasn’t fined for tampering because of this — he was merely warned by the league. Instead, the Lakers were fined $500,000 after the league determined GM Rob Pelinka made impermissible contact with George’s agent “that constituted a prohibited expression of interest in the player while he was under contract.”

George, of course, re-signed with the Thunder instead of going to L.A. last summer.

Johnson technically didn’t tamper with Davis, but the Pelicans sure thought the Lakers did. That was because it was LeBron James who did the dirty work — at least publicly. James and Davis went to dinner after the Lakers defeated the Pelicans on Dec. 21. He was not fined for tampering.

The Pelicans, though, were upset at the Lakers for attempting to poach their star in broad daylight. Reports surfaced that small-market teams felt helpless to big market power. New Orleans eventually opted against playing ball with Los Angeles, and pushed Davis trade talks to summertime.

Davis doesn’t become an unrestricted free agent until the summer of 2020. James will be turning 36 that season. Davis to Los Angeles dreams may be dead in the water if the Lakers don’t land him via trade this summer.

This one was a little unfair. It should be generally OK to compliment another basketball player. It also feels like the line of questioning was set up for Johnson to compliment Antetokounmpo’s game. But Johnson’s own history worked against him.

“As Johnson watches from afar,” ESPN’s Nick Friedell writes, “he can’t help but see and enjoy the parallels between his game and that of the Bucks big man.”

“Oh yeah,” Johnson told ESPN recently. “With his ball-handling skills and his passing ability. He plays above the rim I never could do that. But in his understanding of the game, his basketball IQ, his creativity of shots for his teammates. That’s where we [have the] same thing. Can bring it down, make a pass, make a play. I’m just happy he’s starting in the All-Star game because he deserves that. And he’s going to be like an MVP, a champion, this dude he’s going to put Milwaukee on the map. And I think he’s going to bring them a championship one day.”

The Lakers were fined $50,000 for these comments. For comparison, Antetokounmpo flat-out told Anthony Davis to “Come to the Bucks” in a story that was published on the NBA’s actual website, but was not fined for tampering because players are held to a different standard.