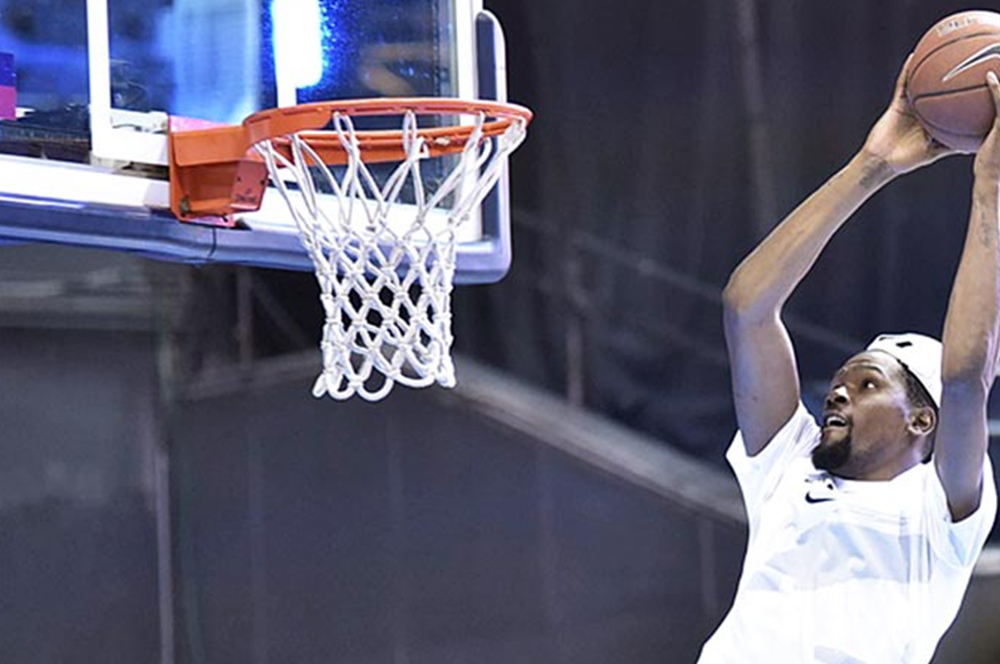 NEARLY a month since hoisting the Larry O’Brien trophy after his Golden State Warriors won their second consecutive National Basketball Association (NBA) title, superstar Kevin Durant said he is still in the process of soaking everything they had done since it was a product of their collective hard work even as he said that they are not about done, more so now with a souped-up roster.

In Manila as part of his promotional tour for Nike and his latest shoe, the KD 11, Mr. Durant said his second title with the Warriors was akin to a “perfect piece of art,” and that he takes special pride in it because it was something they really worked hard for all season long.

“[It was like] signing off on a perfect piece of art… We created this amazing masterpiece throughout the season. Now we can just chill and let it dry a bit, which is the whole summer, and get back to it again for next season,” said Mr. Durant when he met members of the local media for a brief session at Whitespace Manila in Makati on Sunday.

In winning the title for the 2017-18 NBA Season, the Warriors swept LeBron James and the Cleveland Cavaliers in their best-of-seven Finals series with “KD” averaging 28.8 points, 10.8 rebounds, 7.5 assists and two blocks per game en route to claiming the Finals most valuable player award anew.

THREE-PEAT
Now back-to-back champions, Mr. Durant said a third straight title is a goal for the Warriors but it’s something that is not a concern for them until after they are in a position to go at it.

“We have a championship team and that (three-peat) is a goal we want to reach. But we never really talk about it until we are there in the finals. If we start talking about it at the start of the season we will not get there. We have to put in the work and continue improving ourselves. Hopefully we get there,” he said.

Nonetheless, the nine-time NBA All-Star said they are excited of their chances for next season after surprisingly landing another All-Star player in big man DeMarcus Cousins, whose arrival he said could give them an added jolt of energy.

In an unexpected turn of events last week, Mr. Cousins, currently convalescing from an Achilles injury, signed with the Warriors for one year worth $5.2 million.

“On July 2nd things kind of change for us by adding somebody like DeMarcus to our team. I’m excited to work with him. I think it’s going to be a fun year for us, a new season for us,” Mr. Durant said of Mr. Cousins who played last year with the New Orleans Pelicans.

“I don’t see how everybody let him fall to us but I guess we ruined it. We need an injection of energy [for next season] and I think DeMarcus is going to provide that for us,” he added.

BASKETBALL JOURNEY
As for his own basketball journey, Mr. Durant, who had stops in Seattle and Oklahoma City before landing in Golden State, said it has been amazing and he is grateful of the opportunities given to him.

“It’s been like a movie. So many different emotions going through this journey. I’m just grateful that I’ve got to do so much with the game of basketball and it has changed my life forever. It’s just been amazing,” he said.

“[Moving forward] I’ll keep sharpening my tools, finding ways to help my team win. I want to keep it simple and have some fun,” Mr. Durant added.

While here in Manila, Mr. Durant took time as well to promote his latest signature kicks with Nike, the KD11, which boasts of the latest React foam for great cushion on the court, a rubber outsole, which safely cups the foot inside and even extends up to the sides for stability, and a plush, lightweight Flyknit finishes the upper to provide breathability, flexibility, and support.