NBA trade rumors: Marc Gasol could be the next Celtics target

NBA trade rumors: Marc Gasol could be the next Celtics target

NBA trade rumors: Marc Gasol could be the next Celtics target
NBA 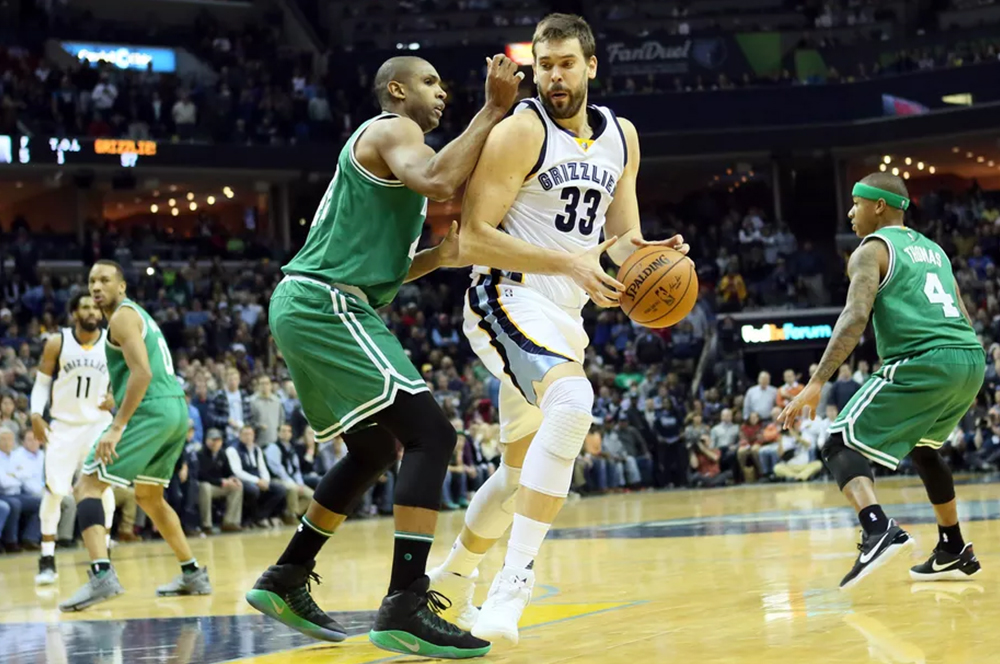 Marc Gasol would fill a role the Celtics need if they want to get a step closer to the Cavaliers, but it’s hard to see Memphis trading him.

For the second year in a row, the Celtics snagged one of the top three free agents on the market after signing Gordon Hayward. Yet, many still feel like they’re one piece away from competing with the Cleveland Cavaliers for a trip to the NBA Finals.

Marc Gasol could potentially be that piece if the Grizzlies flounder, according to Yahoo! Sports’ Chris Mannix.

One player worth keeping an eye on, two league executives told The Vertical: Memphis’ Marc Gasol. The Grizzlies lost Zach Randolph, Tony Allen could be next out the door, and if you were filling out your Western Conference playoff bracket today, Memphis probably wouldn’t be in it. Would the Grizz move the 32-year-old Gasol for a ready-made rebuilding package of players and picks? Would Boston – which has to be wary of putting together a team that would beat Cleveland but still get pulverized by Golden State – be interested? Again, worth watching.

The stars haven’t aligned properly yet to create the opportunity for the Celtics to go after the Grizzlies’ All-Star big man, but a time could come when they do. We know the Celtics have tons of assets. If the Grizzlies struggle this year, do they think about moving Gasol and triggering a rebuild?

Gasol averaged a career-high 19.5 points last season with 6.3 rebounds and 4.6 assists per game. He expanded his range on the floor and shot 38 percent from deep on 3.6 attempts per game. He took a step back on defense, but would still be just the rim protector the Celtics need to compete at a higher level.

Why Gasol to the Celtics makes sense

The Celtics don’t have a rim protector. Al Horford, for all of his skills on both ends, still allowed opponents to shoot 58 percent less than six feet away from the rim this season, per NBA.com’s defensive stats tool.

Gasol, on the other hand, only allowed opponents to shoot 52 percent in that same range. Six percent makes a huge difference in the league — especially when you’re going up against players like LeBron James, John Wall, and Giannis Antetokounmpo. Those players all live at the rim, and allowing them to generate good looks there is bad for the defense.

The Celtics certainly have the firepower to trade for Gasol. Aside from their two prospects they already have in Jayson Tatum and Jaylen Brown, they also have a collection of picks at their disposal, including the Grizzlies’ own in 2019 from a previous deal.

Let’s say the Grizzlies fall into a slump or run into the injury bug for the second time in three years. Their core is already old and isn’t getting any better. Zach Randolph is out the door already, and Tony Allen isn’t far behind.

Why not jump-start your rebuild by getting your first-round pick back and maybe taking a prospect or two in the process? It makes sense for both sides if things start to go south in Memphis.

Why trading for Gasol wouldn’t make sense for Boston

The timing is just off all around. The trade isn’t going to happen this offseason, not when the Grizzlies have to shape out their roster and play games before they can begin to evaluate their direction.

But that also means Gasol, who is 32 years old, will only get older. The Celtics, who are set up to compete right now and into the future, can stand pat and not skip a beat. They may not be as competitive as they’d like against Cleveland, but LeBron James can’t play basketball forever (we think).

Plus, once the Celtics get by the Cavaliers, as Mannix points out, their next step is competing against the Warriors. Gasol isn’t going to help them do that at this age with his lack of mobility.

The next steps for Boston will come organically. They’ll compete for titles because of the talent they draft and their smart moves in free agency. As more time passes, it makes less and less sense to make a trade for Gasol.

On the surface, the fit would be nice for Boston. They’d have one of the better defensive frontcourt combinations in Gasol and Horford and would have four legitimate All-Star players on their roster.

But Danny Ainge is big on patience. He wasn’t rushed to make a deal for Jimmy Butler or Paul George, and that paid off for the Celtics when they managed to get Hayward without giving up any major assets.

He won’t rush into Gasol either. While there’s no apparent solution up front for Boston, allowing players to develop is always a great choice.