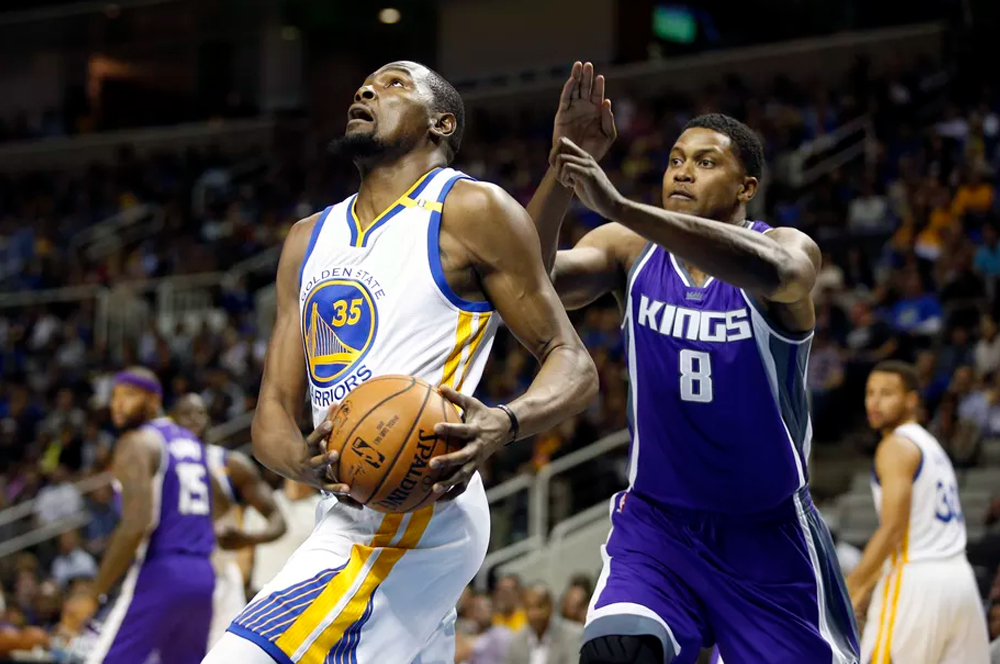 He was willing to sacrifice even more if the Warriors could sign Rudy Gay as Iguodala’s replacement, according to one report. Here’s why.

Kevin Durant will re-sign with the Warriors for a first-year salary of about $25 million, according to ESPN’s Chris Haynes. That’s around $10 million less than if Durant had signed for his absolute maximum (which was functionally impossible for reasons that’ll take way too long to explain) and a tad under $7 million less than the most he could have taken with the Warriors bringing back Shaun Livingston and Andre Iguodala.

But what if Iguodala really left the Warriors? Turns out, Durant would have sacrificed more, not less, according to USA Today’s Sam Amick. That way, the Warriors could have signed free agent Rudy Gay as an Iguodala replacement.

Gay is a worse player than Iguodala and is coming off a torn Achilles, so it seems odd on the surface that KD would take more of a pay cut to welcome him. But due to NBA salary-cap rules, he’d actually have to do so.

This merits a bit of an explanation.

The Warriors were able to go over the cap to re-sign Iguodala because he was their own free agent. They would not be afforded the same opportunity for Gay, unless Gay took the $5.2 million taxpayer mid-level exception. But he could have done that no matter what KD made next year — the only cost would have been from Joe Lacob’s wallet.

Presumably, Gay wanted more than that. In order to facilitate those expectations, the Warriors would have needed to create cap space to sign Gay. Creating cap space would have required Durant taking even more of a cut from the maximum he could have made.

How much more of a cut? Let’s break this down

The salary cap was set at a little more than $99 million. Golden State had five players under contract for next year making a total of $39.3 million. They also had nine free agents, including Durant, Iguodala, and Stephen Curry. To retain the right to go over the cap to re-sign them, they needed to keep their cap holds on the books. Those nine cap holds added up to $87.1 million.

If Iguodala would have left, that number would’ve dropped to $109.7. Curry obviously got a raise, but the Warriors would leave his small cap hold ($18.2 million) on the books until the last minute and finalize his deal at the end. Shaun Livingston’s first-year salary on his new deal is about $3 million less than his cap hold, so the Warriors could have gotten down to $106.7 million by putting pen to paper first. Renounce the rights to Zaza Pachulia, Matt Barnes, David West, and Ian Clark, and that gets the Warriors down to about the cap level, once you add in small holds for any incomplete roster spot under 12.

From there, it would have depended on what Gay wanted

Durant’s cap hold was $31.8 million. As soon as he officially signed his new deal, his actual salary would have replaced his hold on the Warriors’ books.

If Durant were to take the $25 million he ultimately took with Iguodala, then Gay could have slotted in with a starting salary in the $6-7 million range. But Durant would have been willing to sacrifice more, though, perhaps even enough to get Gay up to eight figures. If that were the case, Durant would have needed to sign for just $20 million next year to fit Gay in at a reasonable number.

That would have been an even bigger pay cut than the one Durant took to facilitate Iguodala’s re-signing. That’s KD’s choice, but in a way he would have been even more hamstrung due to the NBA’s cap rules.