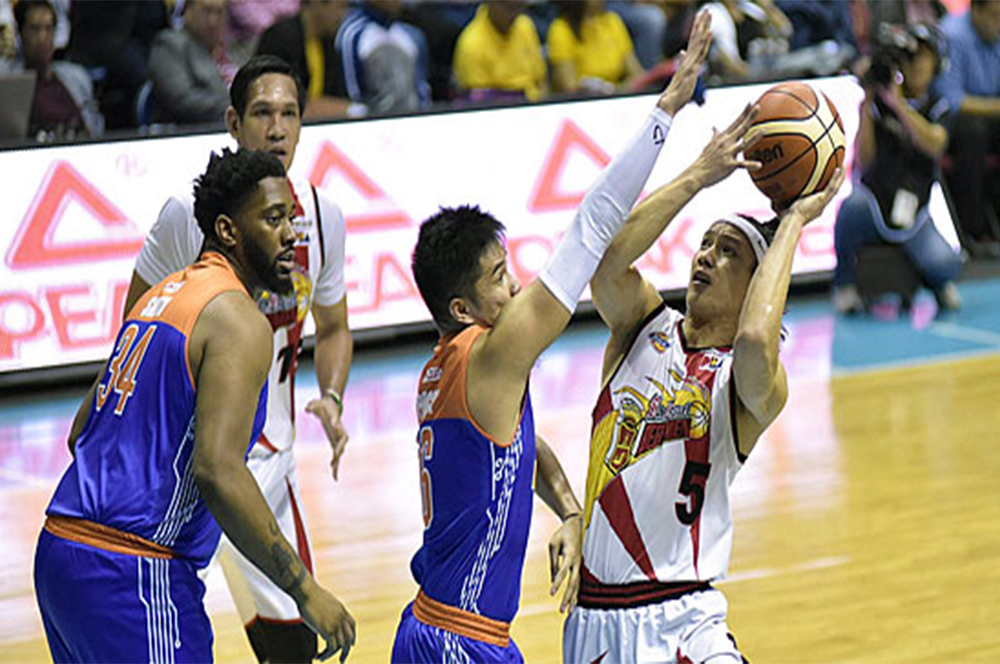 THE San Miguel Beermen are now on the driver’s seat of their best-of-seven Philippine Basketball Association Commissioner’s Cup finals affair with the TNT KaTropa after taking Game Three, 109-97, last night to race to a 2-1 series lead.

Building on its lopsided win in the second game of the finals of the midseason PBA tournament, San Miguel surged to back-to-back wins after dropping the series opener albeit needing to dig deep in Game Three to hack out the win.

Knowing the significance of the game and coming out with the win, the two teams went at it right from the get-go, rendering the game emotionally charged.

The two squads engaged in a defensive battle in the opening period, fighting to a 23-all stalemate at the end of the first quarter. San Miguel made an 11-4 run in the first four minutes of the second canto, with import Charles Rhodes and Alex Cabagnot leading the way, to build a 34-27 lead. But towed by import Joshua Smith and RR Garcia, TNT would battle back, answering with an 8-0 blast of its own in the next three minutes to reclaim the lead, 35-34.

Momentum swung left and right thereafter before the KaTropa settled for a one-point cushion, 47-46, at halftime. Like the way they started in the second frame, the Beermen went on a fast start to begin the third period. San Miguel blitzed TNT, 16-8, to overtake the latter and create a seven-point separation, 62-55, with a liitle over six minutes left in the third period. The KaTropa tried to make up for lost ground but the Beermen did not budge to end on top at the end of the third frame, 79-72. The fourth period saw TNT make its move early only to be staved off by San Miguel each time.

The Beermen held an eight-point lead, 92-84, with six minutes to go in the game, extending it to 11 points, 96-85, a minute later. TNT cut its deficit to nine, 104-95, at the 1:06 mark of the match but that was the closest it would get as San Miguel held on to park the win. Mr. Cabagnot paced the Beermen with 28 points, nine rebounds and six assists to earn player of the game honors. Mr. Rhodes had 25 points and 20 rebounds while Chris Ross finished with 17 markers. TNT, for its part, was led by Mr. Garcia with 19 points while Mr. Smith had 18 points and 14 rebounds.

For the second straight game, TNT rookie RR Pogoy was left scoreless. “We are happy with this win. The players showed no let-up in intensity and that really made a difference,” said San Miguel coach Leo Austria after their win. “I’m sure in the next two days TNT will make the adjustments, including replacing an import, so we will just be ready,” he added. Game Four of the finals will be on Wednesday also at the Smart Araneta Coliseum.

Meanwhile during the halftime break, the PBA honored military service men and policemen currently involved in operations in Marawi City. With members of the board present, the PBA also made a cash donation for the recuperation of military and police personnel hurt in the fighting in the Mindanao city. Players from both San Miguel and TNT showed their appreciation as well by shaking the hands and posing for photos at center court with the servicemen.