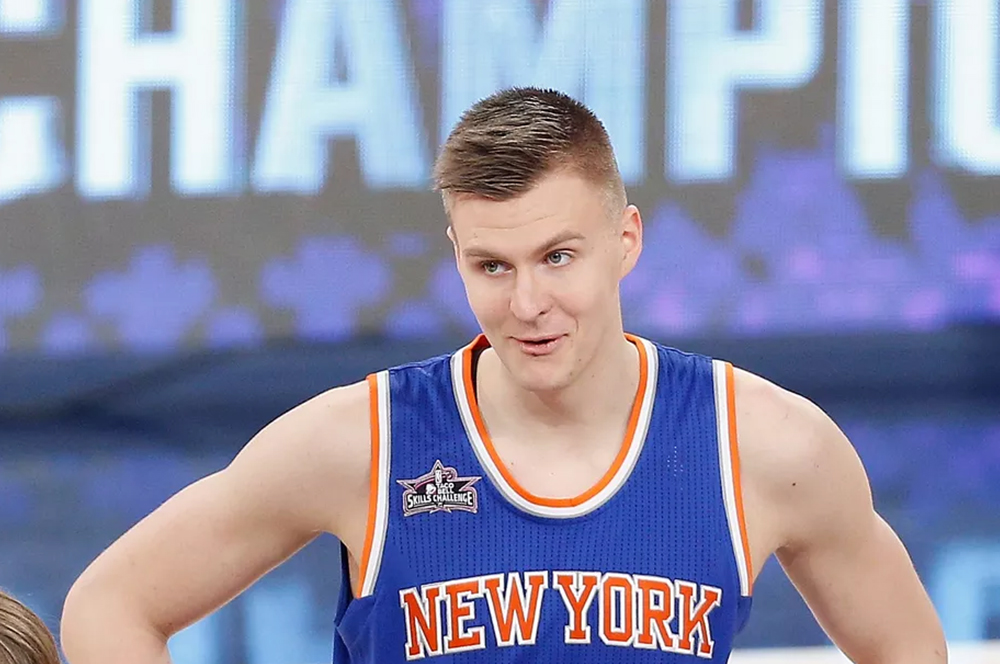 The only person who really knows how close the New York Knicks came to trading Kristaps Porzingis before Thursday’s draft is Phil Jackson. Everyone involved will say publicly (and, probably, anonymously to reporters) that the trade wasn't close. (Jackson didn't want to comment on the Knicks' trade discussions Thursday night.)

League sources, though, say that members of the Knicks front office were at the very least intrigued by some offers they received for Porzingis over the course of the past few days.

Jackson and the Knicks' asking price turned out to be too high (it was described by one opposing team as astronomical), which makes sense. You ask for a massive return when you're talking about trading a young star.

Again, just how close the Knicks got to doing a deal is unclear.

One holdup to some discussions might have been Joakim Noah. Another? Jimmy Bulter.

Sources told Ramona Shelburne and I that Noah's name came up in multiple discussions about possible Porzingis trades with Jackson and the Knicks looking to send out the remainder of the four-year, $72 million contract that he signed last offseason.

Butler factored in because one of the many offers discussed between Boston and the Knicks, per sources, included Boston's third pick, a second 2017 lottery pick and an additional player (Jaylen Brown, Avery Bradley and Marcus Smart were among the names discussed).

That second lottery pick was supposed to be acquired via trade -- and members of the Celtics organization viewed Minnesota's No. 7 pick as attainable, sources say.

That pick eventually was traded by Minnesota to Chicago in the Butler deal. So Boston didn't have that second lottery pick to offer New York in exchange for Porzingis. The Phoenix Suns also held out hope a little over an hour before the draft that the Knicks would consider their offers for Porzingis, but knew it was a long shot.

Ultimately, nothing came to fruition.

Assuming there will be no more trade discussions this offseason, the club will have to find a way to sort through lingering issues with the 21-year-old Porzingis. There's frustration on both sides.

Remember, Porzingis skipped his exit meeting over frustration with the drama and dysfunction surrounding the organization. And, just a guess here, but that frustration hasn't gone away after the events of the past few days.

Jackson clearly wasn't thrilled with Porzingis' decision to skip the exit meeting, citing it while discussing publicly his decision to listen to offers for Porzingis.

Just where things go from here is anyone's guess.

Will it ultimately be water under the bridge? Or a lingering issue? The guess here is the latter, but that probably depends largely on how things unfold over the next few months.

Ntilikina feels good about triangle: One scout who has watched Knicks first-round pick Frank Ntilikina for the past three years says he feels that he can fit well in the Knicks' triangle offense.

"If he develops appropriately, I don't think there will be many holes in his game. So I think he would be a very well-rounded guard to run the triangle offense," said Elan Vinokurov, president and owner of EV Hoops, a basketball scouting and consulting service. "He knows how to involve players, he reads the game well, he can analyze situations. It shouldn't be an issue."

Ntilikina said in an interview earlier this month that he's familiar with the offense (learning by watching videos of NBA games). He and his teammates at SIG Strasbourg say their offense relies heavily on ball movement, spacing, post-ups and reading the defense -- attributes similar to the triangle offense.

"It's a lot of movement, a lot of rules so I think I can easily [learn] the triangle offense," he said.

Many of the Knicks have struggled with the offense over the past three seasons. Multiple veterans have publicly and privately grumbled about the offense and questioned its effectiveness. Jackson and the organization are looking for players who can thrive in the system, so Ntilikina's ability to adapt to it will be an important part of his early NBA career.

Hayes, Barry, Kornet will play for Knicks in summer league: The Knicks have signed Wisconsin's Nigel Hayes to a partially guaranteed training camp deal, sources said. Hayes, 6-foot-8 with a 7-3 wingspan, went undrafted, but some college observers see him as having the potential to be a versatile defender at the next level with a strong outside shot, something the Knicks certainly could use. Hayes, who worked out for the Knicks before the draft, averaged 14 points, 6 rebounds and 2.7 assists per game last season.

He also made headlines earlier this season when he said he didn't "really like New York. It's too big. It's dirty. There's trash everywhere. There's too many people. And it's cold right now. It's nice to look at in the movies and stuff, but I've had my share of it. I'm just trying to come here and win some basketball games." His agent, Kevin Bradbury, told the New York Post that Hayes was joking when he made the remarks.

The Knicks also signed Vanderbilt's Luke Kornet to a two-way deal, per ESPN's Chris Haynes. The deal will allow Kornet to have one of New York's 17 roster spots and play for both the Knicks and their D-League club, the Westchester Knicks. He will earn an NBA salary for each day he's with the Knicks, with a maximum of 45 days. The 7-foot-1 center is the all-time NCAA leader in 3-point shots made by a player over 7 feet tall, and he also blocked 210 shots in his career.

In addition, the Knicks have offered Florida's Canyon Barry a spot on the summer league team, per a source. Barry, the son of Rick Barry, was the sixth man of the year in the SEC. He scored 11.4 points per game last season at Florida and shoots his free throws underhanded, just as his Hall of Fame father did.

Barry is expected to be joined by Hayes, Kornet, Ntilikina and second-round picks Damyean Dotson and Serbian guard Ognjen Jaramaz in Orlando for the summer league.