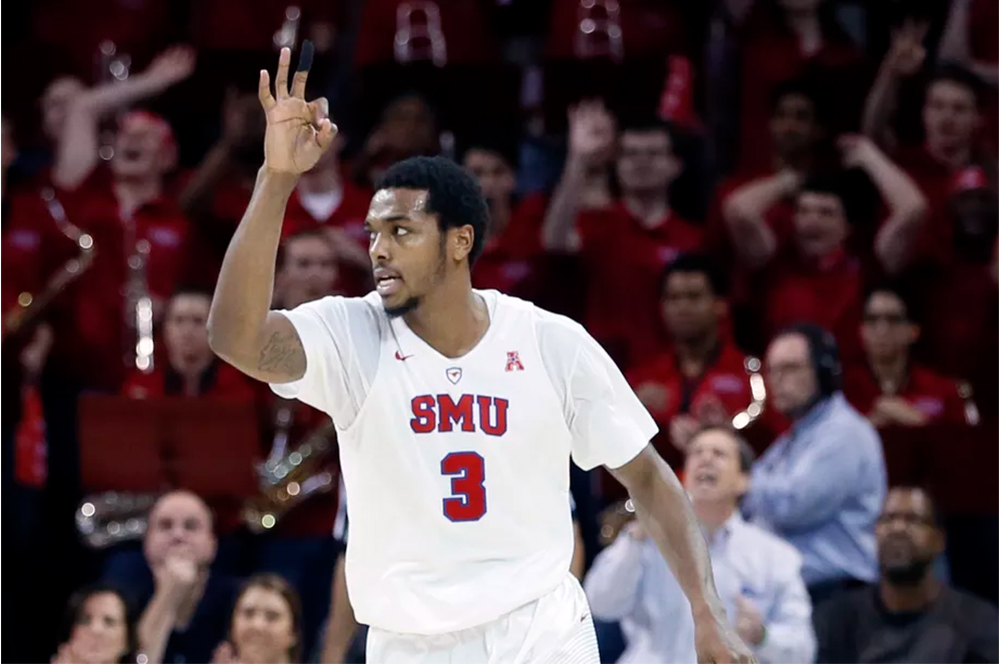 The SMU senior is flying under the radar in the NBA draft, but he shouldn't be.

A look at recent draft history shows an interesting trend in which players are most often undervalued by NBA teams. In just the past two years, Patrick McCaw, Malcolm Brogdon, Josh Richardson, Norman Powell, and Tyler Johnson have all either been second-round picks or went undrafted. A little farther back Jae Crowder, Danny Green, and Wesley Matthews have been some of the biggest second-round steals of the past 10 years.

The common thread that ties them all together is an ability to play defense that got undervalued by NBA GM's who tend to draft for offense first. All of them but McCaw were seniors when they were drafted.

Who fits the bill this year? SMU's Sterling Brown is the first guy on my list.

Brown is one of those prospects who looks like a poor athlete at first glance due to his physique, but is actually surprisingly explosive. As the brother of former NBA player Shannon Brown, it shouldn't be shocking that he can get up a little.

More importantly than being able to dunk, Brown can move well on defense.

He is attentive keeping track of guys off the ball and usually a step ahead on rotations. On the ball, he has good enough feet and reactions to contain ball handlers. At 6'5 with a 6'9.5 wingspan and a solid 225-pound frame, Brown has the size to comfortably check most shooting guards or small forwards, and even play some power forward in small lineups.

He's not a lockdown one-on-one perimeter defender, but he's smart and instinctive. Playing with consistent effort and paying attention to his team's scheme allows him to be a plus defender. Watch this sequence where he starts in the bottom right of the screen. He trails his man through off-ball screens, closes out on balance, brushes through an on-ball screen, then forces a turnover with his length.

Brown's similarly well-rounded offensive game is what makes him such an appealing prospect.

He has been an efficient player throughout his college career because he knows how to play his role. Career numbers of 45.1 percent from three, 53.4 percent from two, and a 61.6 percent true-shooting mark are rare from a college wing.

His extreme efficiency reveals what there is to like about his profile and shows some of his weaknesses. He is a very good shooter who generally only takes good shots. However, if a team expects him to create for himself at all in the NBA, they will be disappointed.

It's not that he can't handle the ball. He actually plays in pick-and-roll a fair amount and can drive to the basket or pull-up for jumpers off his dribble.

Yet, despite his skill level, Brown's career usage rate at SMU is a measly 16.7 percent. Part of that is due to the talent that has been at SMU and his own selectivity, but lack of elite creativity or athleticism is his primary limitation. The biggest concern with Brown is that because he played a relatively minor role at SMU, he won't be able to translate his game to the NBA level.

But further watching of SMU eases those concerns.

The Mustangs play a motion and pass-heavy style that encourages all five players to get involved. No one dominates the ball. Semi Ojeleye played the role of finisher most often, but Brown was the key to the whole team with his ability to both score efficiently himself and create for others. He averaged over three assists per 40 minutes each of his last three NCAA seasons and even brought the ball up some for SMU.

No, Brown is not going to be a primary or even secondary creator at the NBA level. But his ability to pass the ball and play within the offense will allow him to bring value even in a minor offensive role.

Some of the most valuable role-playing wings in NBA history know how to be selective and not dominate the ball. Guys like Shane Battier, Robert Horry, or even Jared Dudley, have been successful NBA offensive players precisely because they can shoot, make good decisions with the ball, and don't stray from their comfort zone.

It would be optimistic to expect Brown to be as good as any of those guys. Nonetheless, his profile suggests he could play a similar role. His combination of defensive ability and offensive aptitude is exactly what the NBA has missed on recently.

All sorts of teams would love to have Brogdon, McCaw, Richardson, Powell, and Johnson on their teams. Brown is exactly the kind of sleeper that can join that list.