Paul George to the Lakers? All the possible ways it can happen
NBA 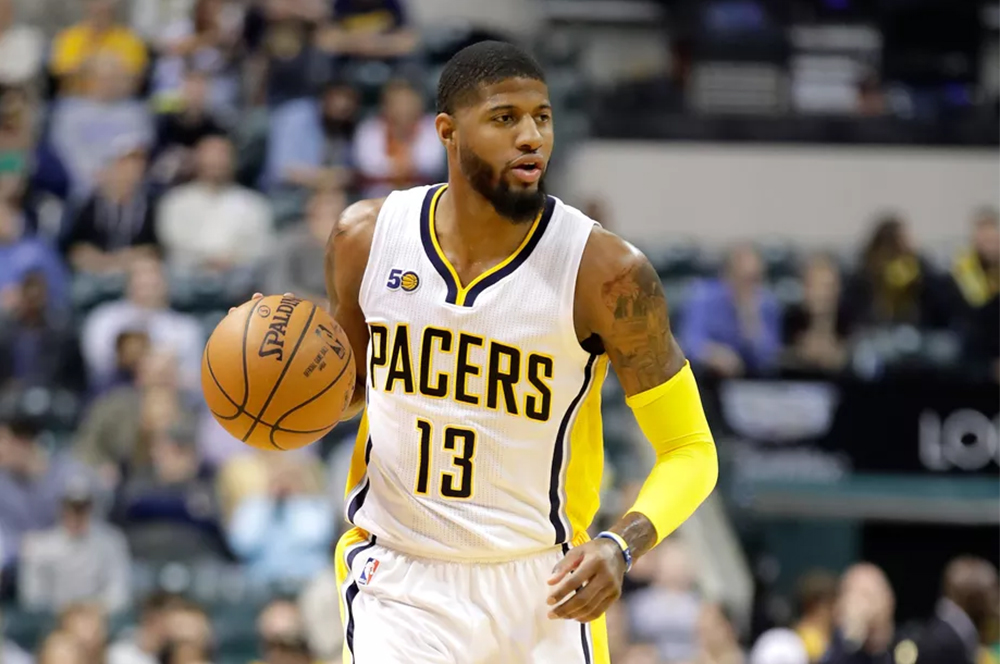 Los Angeles could wait to sign PG13 next summer or trade for him now. Either way, the future looks bright for the Lakers.

Paul George informed the Pacers on Sunday of his pending decision to leave Indiana when his unrestricted free agency hits in 2018. The move, first reported by The Vertical’s Adrian Wojnarowski, was done in order to give the Pacers adequate time to plan for a future without the All-Star wing.

It is widely believed George will bolt the Pacers in order to join his hometown Los Angeles Lakers team and play for one of his childhood idols, Magic Johnson. But as it stands, the Lakers wouldn’t have enough cap room to sign the All-Star forward outright.

For the 2018-19 season, Los Angeles is looking at $15.6 million in available cap to sign free agents, according to The Vertical’s Bobby Marks. That number is only accurate if the Lakers renounce all of their free agents except for Julius Randle — Nick Young, Corey Brewer, Tarik Black and David Nwaba — and accounts for signing their two 2017 NBA Draft picks (No. 2 and No. 28) to rookie contracts.

George would sign a four-year max deal with the Lakers at $133 million that starts at around a $30.6 million salary in Year 1 before annual raises.

So how do the Lakers bridge that gap?

The Lakers have a few options to add the All-Star forward without trading for him. They could free up space by renouncing Randle and freeing themselves of his $12 million cap hold, but that’s the least attractive route.

Los Angeles also has three players making eight figures in 2018: Luol Deng ($18 million), Timofey Mozgov ($16 million), and Jordan Clarkson ($12.5 million). The Lakers would sooner trade Clarkson than waive him, but they could invoke the stretch provision on both Deng or Mozgov.

That would spread the remaining $30-plus million after 2018 on each of their contracts over five years instead of two. Doing so would cut the cap hit on Deng’s contract from $18 million to $7.2 million (annually for five years) and Mozgov’s from $16 million to $6.5 million.

Stretching both veterans would free up $36 million in cap room for the Lakers to ink George to a four-year max deal. It also already includes the cap hold on Randle’s contract.

Here’s what the Lakers’ roster would look like in this instance:

The Lakers would still have around $5.5 million and their room mid-level exception to sign free agents. They would have to fill out the roster with players on minimum contracts or trade one (or two) of their young talents for multiple players in return, but Los Angeles would get the star forward it needs to help bring the Lakers back to showtime prominence.

The Lakers could also trade for George now

Free agency can be unpredictable. Just a couple years ago, DeAndre Jordan was definitely going to the Dallas Mavericks. Until he wasn’t.

Players change their minds all the time, and even though the stars have seemingly aligned for a George-to-LA move in 2018, that could change in the blink of an eye.

The Lakers could take the guess work out of this process by orchestrating a trade for George now. That would drub another team’s odds at sneaking in at the last second and making the All-Star wing an offer with a better supporting cast. It could be the Celtics, who tried to trade for PG-13 at the trade deadline. It could be the Cavaliers, who need another proven star to get over the hump against the Golden State Warriors. It could be any number of teams that believe they’re just one piece away from competing for a championship — something George has insisted means the world to him.

George is scheduled to make $19.5 million next season. The Lakers could trade any one of their top-paid players — Deng, Mozgov, or Clarkson — or could package guys like Young, Black, or Brewer together. The Pacers would likely want one of Los Angeles’ younger players or one of their draft picks in return, but with George announcing his intention to leave next summer, they have little leverage in trade negotiations.

A trade would also ensure the Lakers could offer George the best possible contract. Los Angeles would absorb George’s Bird Rights in the trade, allowing them to sign George to a five-year max deal at around $177 million. Other teams can only offer four-year deals at around $130 million.

Los Angeles has a few routes it can assess. The Lakers can wait for 2018 and clear space to sign PG-13 outright. Or they can move now and trade for the All-Star wing this summer. Either way, Johnson is in the driver’s seat of the franchise’s future, and with George in tow — either this year or next — the future looks as bright as can be in Los Angeles.