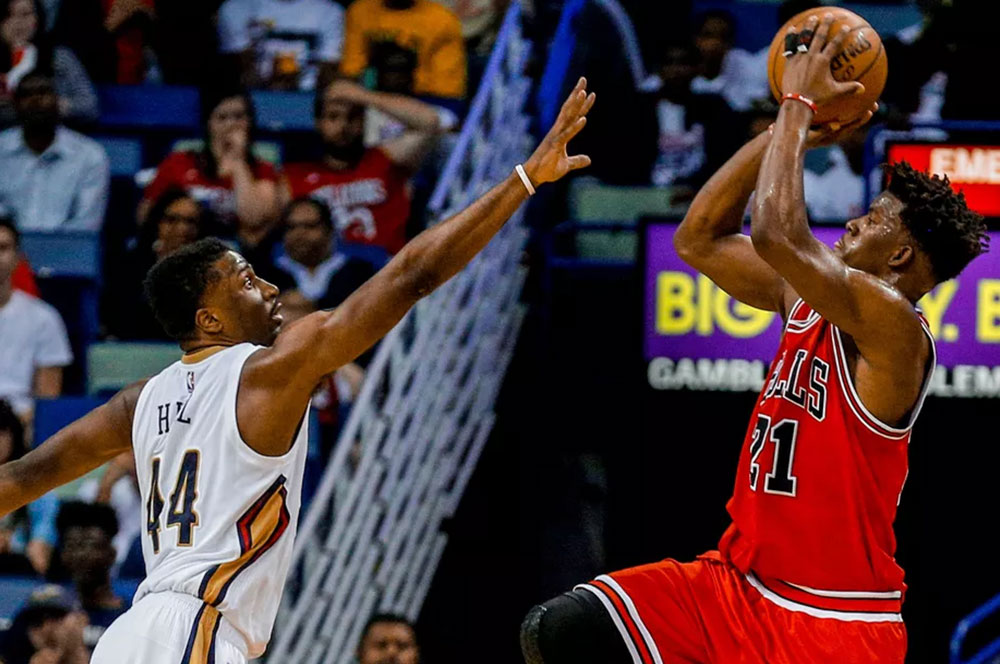 Jimmy Butler played nearly an entire game of dominant basketball in the Bulls’ come-from-behind victory over the Hawks on Saturday, so you could’ve excused him for being a little tired against the Pelicans on Sunday. Instead, Butler came out and delivered another superstar performance as the Bulls won 117-110 to earn their fourth straight victory and solidify their place in the Eastern Conference playoff picture.

Butler shorted his first jumper but then made nine of his next 10 shots to finish with 25 first-half points. He even pulled a Dirk!

The Bulls led by 16 points at the break and held off several Pelicans charges in the second half to secure the victory. Butler faded a bit in the fourth quarter, but he buried a dagger jumper in the final minute to finish with 39 points (14-of-26 shooting), six rebounds and five assists.

While Butler struggled a bit in the fourth, the Bulls’ bench picked him up. Bobby Portis and Joffrey Lauvergne in particular were flames, with the duo combining for 19 of the Bulls’ 30 fourth-quarter points. Portis had one of his best games overall of the season with 21 points and 11 rebounds, while Lauvergne added 15 points and five boards in one of his best outings.

Butler, Portis and Lauvergne all hit three triples as the Bulls continue their insane 3-point shooting. They shot 13-of-26 from long range to extend their streak of double-digit 3-point games to a franchise-record seven.

I’m honestly not totally sure what to make of all this offensive success of late. It’s coincided with Dwyane Wade’s injury, which has led the Bulls to running lineups that are actually more conducive to offensive success. There’s more pace and more spacing, and the Bulls are getting better looks at the bucket.

But they’re also getting some crazy-hot shooting from a handful of guys. Butler has been playing at a superhuman level since Wade went down (29/8/6 on 54/60/81). Nikola Mirotic has been flames from 3. Rajon Rondo has been on a tear with his outside shot (not tonight), and just playing much better in general outside of some of his asinine turnovers. And then random guys like Portis/Lauvergne/Valentine are chipping in key triples at big times.

So I’m really curious to see how long they can keep up this 3-point shooting, and then it’ll be intriguing to see how things go if Wade returns for the playoffs, which the Bulls will almost certainly make at this point. With the Heat and Pacers both losing again, the Bulls are now alone in seventh by a game and with the tiebreaker over both. And with the Hawks losing in Brooklyn to continue their free-falling ways, there’s a pretty damn good chance the Bulls get up to No. 6. What a time to be alive.

Also, I want to note that the DeMarcus Cousins roller coaster was something to behold in this game. 26 points and 18 rebounds to go along with tons of loafing, complaining and horrible defense. It was the Peak Boogie Experience.