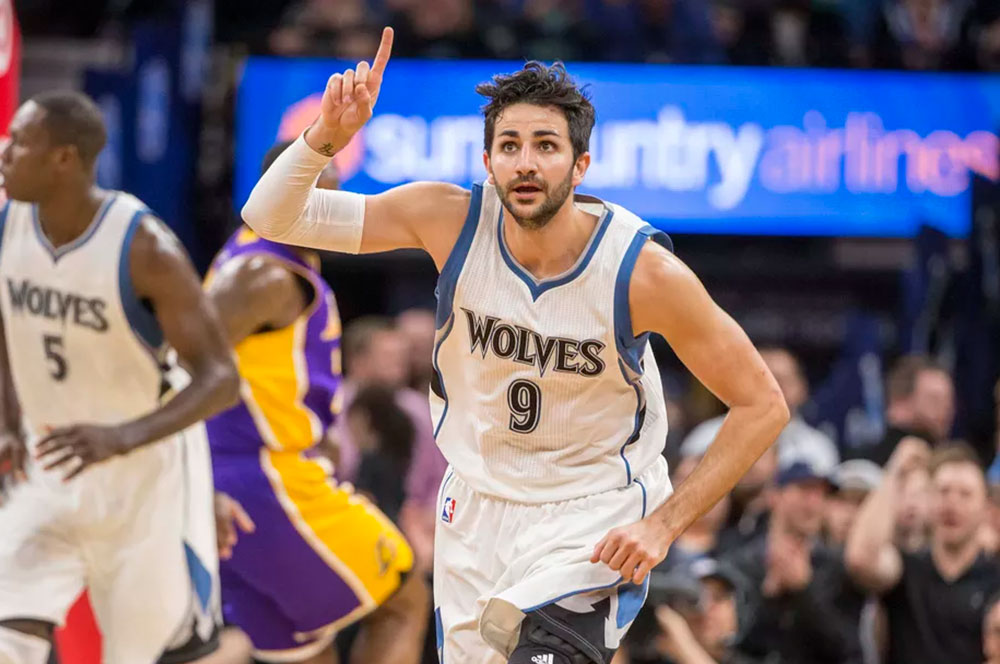 Ricky Rubio showcased everything we’ve been waiting for. He had a career-high 33 points while adding 10 assists and five rebound

MINNEAPOLIS — Ricky Rubio decided to end his marvelous March with a cherry on top.

The 26-year-old point guard led the Wolves to a 119-104 victory over the tanking Lakers behind a career night. No, it wasn’t a new franchise mark in assists like he set earlier this year; tonight was different.

Rubio found his shot every step of the way en route to a personal best 33 points since he came over from Spain in 2011. He added 10 assists, five rebounds, and two steals. This game showcased what Wolves’ fans and critics have been waiting for, further cementing the absurdity that was the rumors circulated at the trade deadline.

“I feel a lot of confidence and I think the experience is starting to pay off and the work that I put in too,” Rubio said after the game.

“It feels good. Starting the season I wasn’t feeling that good and now I feel the best I’ve ever felt.”

He was absolutely cooking to start the game. Rubio had 13 points (3-3 shooting from behind the arc) and five assists in the first quarter alone. Whenever Rubio starts a game with that kind of efficiency, you can typically pencil him in for a great game overall. He had 20 points as the teams went to halftime.

Part of that, much to the chagrin of both coaches, was the horrid defense showcased early on. After Minnesota jumped out to a 16-5 lead, the two teams were eventually tied after one at 37 points a piece. The most concerning aspect throughout was the Wolves interior defense. After Ivica Zubac left early with a high-ankle sprain, Tarik Black came in and promptly scored 11 points without missing a bucket in the first quarter. In the second half, a wild Thomas Robinson appeared and tallied 12 points on 6-9 shooting from the field.

As the game went on, Minnesota’s defense became serviceable. This allowed them to pull away behind a stellar offensive effort and while the story of the game was Rubio, he wasn’t the only one excelling on that end. Andrew Wiggins had 27 points, 15 of those in the third quarter alone. Gorgui Dieng had 11 points, including one of his patented corner threes, while dishing out six assists.

In fact, G did just about everything you could ask for. He had 15 boards and three blocks while consistently making hustle plays that extended possessions on offense and broke up plays on defense. When he plays with Kris Dunn, teams really have a hard time as the two are so effective with their suffocating double teams.

“He can go out there and do a lot of great things,” KAT said of Dieng after the game. “I think that people undervalue him for our team especially.”

It was a surprisingly physical and chippy game between two teams that have been eliminated from playoff contention. Towns had an insightful reason as to why:

“That’s how it is. That’s how everyone’s going to treat us. They look at us as a young team without that fight so we’ve got to go out there and prove ourselves. We’ve got to earn the respect of our opponents.”

This team is definitely showing some fight. It helps to have Dunn who is relentless on defense. Rubio’s offensive revelation is allowing Thibs to play the rookie point guard at the two spot and it works wonders on the other end. He added another three steals tonight and consistently attacked loose balls, something we’ve seen all year from him.

If Rubio can carry over his improved shooting percentages to next year when Zach LaVine returns from injury, LaVine may very well find himself coming off the bench. He could be the premier go to scorer for a second unit while Dunn provides All-NBA defense for the starters. We’ll have to see the direction Minnesota takes in the draft, but Dunn can already defend just about any guard or wing in the league, and we all know how valuable that is in Thibs’ mind.

That’s a pretty hot take, and I am not sure how well that would go over with LaVine, who has always been discussed as part of the big three with Wiggins and Towns. This team could use more balance in the ratio of bench to starter scoring, and if Rubio can be the third option for the starters, Zach could be a nightmare for opposing reserves.

DeAngelo Russell finished the game with 14 points and six assists but turned it over five times. Jordan Clarkson had 18 points and seven assists. Former Wolves player (twice) in Corey Brewer got the start for LA, a clear indicator of the organization’s intent of tanking. He had a few plays where he showed that he’s still got something left, and he finished with 11 points.

With the victory tonight, the team now has 30 wins, surpassing their total of last year. The Wolves host the Kings this Saturday.