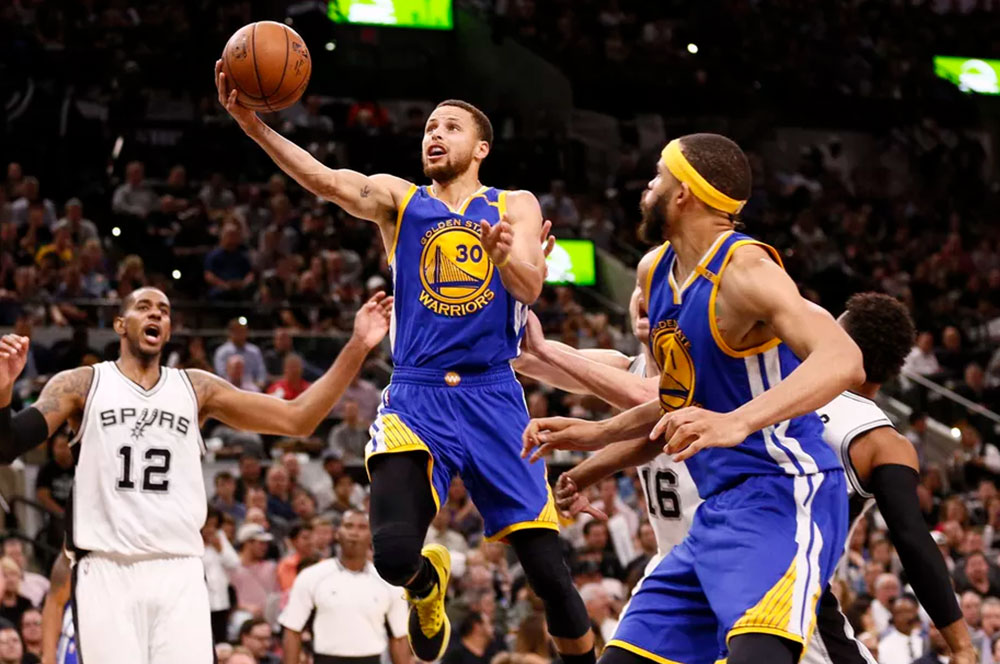 The Golden State Warriors defeat the San Antonio Spurs 110-98 in personally the most enjoyable game of the 2016-17 campaign. The Warriors were down 7-29 with three minutes left in the first quarter.

They proceeded to overcome a 22 point deficit on the road against their conference rival and competitor for the one-seed. The Warriors outscored the Spurs 93-65 through the last three quarters, and in doing so sent a nationally-televised statement to the rest of the league.

Holding the league’s best offense to just 98 points on 41 percent shooting is no easy task, especially playing on the second night of a back-to-back. The Warriors’ defense is coming into full force at the perfect time, after new additions to the team have had ample time to adjust to the communication-heavy system. Despite early struggles, the Warriors managed to narrowly win the turnover battle, forcing 17 San Antonio turnovers that lead to 23 points, compared to 15 Warriors turnovers leading to 22 points.

On the other end, the Warriors hit 13 of their 26 three-point attempts, good for 50 percent, including one late fourth quarter dagger from David West. During the game, the Warriors had 31 assists on 43 made field goals. After the first quarter, where the Warriors made just five of their 17 attempts, the team shot an efficient 57 percent for the last three frames.

In terms of individual performances, the veteran leaders of the team, Andre Iguodala and David West, stepped up in a major way, along with critical contributions from the Splash Brothers. Iguodala logged 30 minutes on the back-end of his 31 minutes in Houston, and if he was tired, it certainly didn’t show in his legs, as he scored 14 points, hitting some especially tough jumpers in the grill of two-time Defensive Player of the Year Kawhi Leonard. He had six rebounds, an assist, and two steals with no turnovers.

David West had his best game of the season, finishing with a team-high +24 on the night, and an especially dominant fourth quarter, where his vision, shooting, and defense prevented a San Antonio run. West had 15 points, making eight of his ten attempts within the arc, and hitting a corner three late to push the Warriors to 110. The bench as a whole played fantastic, rising to the challenge against the vaunted Spurs bench unit, as they poured in 45 points.

Stephen Curry and Klay Thompson demonstrated yet again why they are the best backcourt in the league, combining for 52 points with eight made threes between the pair. The two-time MVP continued to rack up assists as well, dishing out 11 dimes with just two turnovers, and grabbing three rebounds as well. He would finish with 29 points on 50 percent shooting from beyond the arc. Thompson had his moment as well, carrying the bench unit to start the fourth quarter and playing fantastic defense on Manu Ginobili and Kawhi Leonard latter in the quarter.

This was my personal favorite game of the season thus far, especially given what happened last night. The Warriors took on their two biggest competitors in the Western Conference on national television, in their home courts, and without Kevin Durant. They walk away 2-0 with two very different but equally emotional wins. Whereas they overcame inconsistent refereeing in the Houston, the Warriors overcame their own mistakes in San Antonio. This team has hit a considerable stride entering the playoffs, and it will be exciting to see to what new heights they can ascend with Durant’s return in the coming one to two weeks.