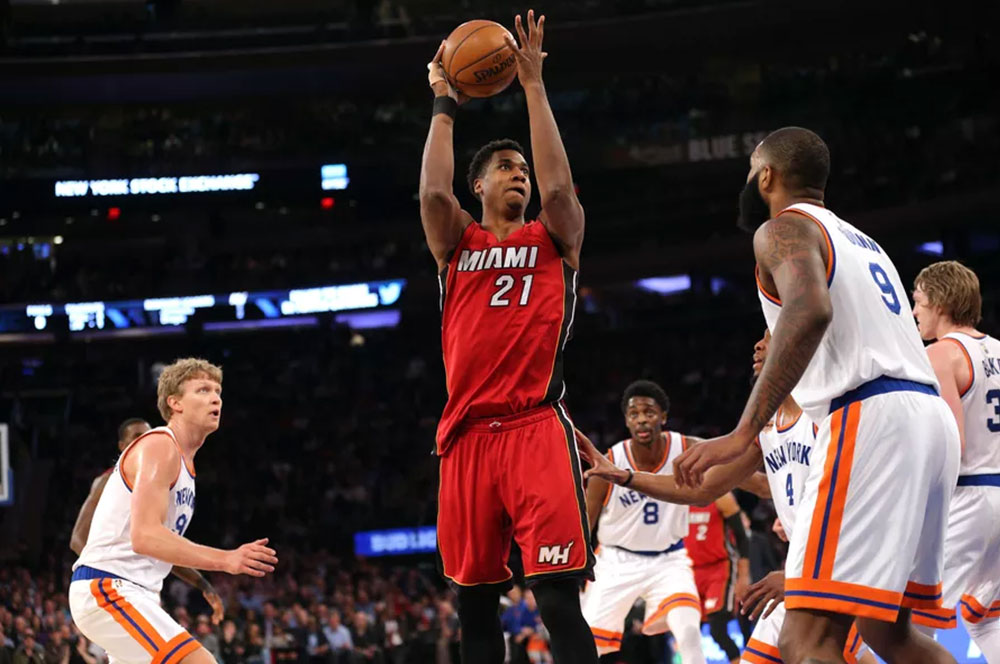 The Miami Heat used a balanced team effort on both ends of the court to take apart the inconsistent New York Knicks over the course of the second half for the 105-88 win on Wednesday night. There would be no hangover after last night’s buzzer beater against the Detroit Pistons in their once-improbable quest to make the playoffs.

The first half was a competitive affair despite Derrick Rose being a late scratch from the Knicks starting lineup and a disengaged Carmelo Anthony going scoreless. Miami went up ahead early with an 8-point lead but a 10-0 run by Knicks in the second quarter put them up 26-24 for their first lead.

Rodney McGruder couldn’t stay on the floor in the first half with foul trouble, so coach Erik Spoelstra gave Okaro White his first meaningful minutes in a long time to provide a spark off the bench. Hassan Whiteside struggled to make an impact but turned it around in the second half. Hassan's first field goal attempt didn't occur until four minutes into the second quarter, when he was blocked from behind by Kyle O'Quinn. At that time of the game Whiteside was scoreless with just one rebound and didn’t score until a dunk off an in-bounds play with 2:45 left in second quarter.

Miami’s 17-4 run produced the largest lead of the night at 91-72 to start the fourth quarter that broke the game wide open as they coasted to victory. Kristaps Porzingis was the sole bright spot for the Knicks with 20 points, but Anthony never got it going and no one else was able to counter the Heat’s defensive intensity and superior depth as the lead swelled to as much as 23 points late in the. Both teams attempted 25 shots from beyond the arc, with Miami making 12 and New York only five.

Josh Richardson capped off an excellent first half with a 3-pointer to score 14 on 6-9 shooting in his best game of the season and he finished with 17 points. Dragic is officially back in fine form after a mini slump with another excellent performance, tallying 20 points, nine assists and seven rebounds while James Johnson added 18 points off the bench. In total five Heat players reached double-figures in scoring, with Wayne Ellington pouring in eight points in the final quarter to help seal the victory.

In a welcome reversal with so many Knicks fans rooting their team on at the AmericanAirlines Arena, this time it was the Heat fans chanting “Let’s go Heat!” in the closing moments of the game.

Miami won their sixth straight game at Madison Square Garden and look to beat the Knicks again back home Friday night, with another chance to reach .500 in their next game.