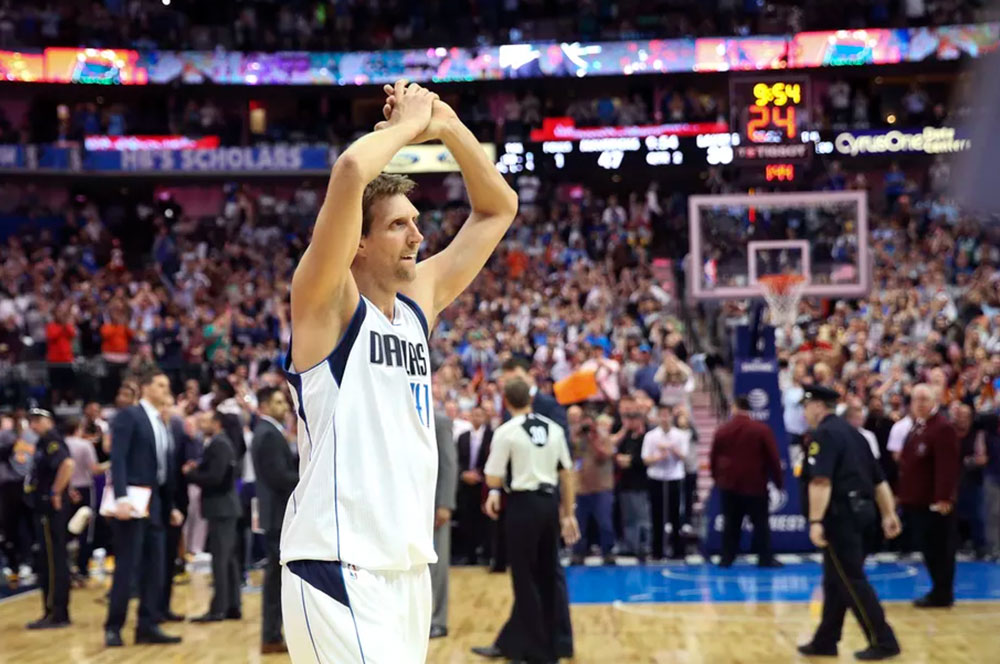 This one definitely felt different.

The Dallas Mavericks have won three games in a row, and 5 of their last 6. They will continue to face a fairly soft schedule for the remainder of the home stand. Tuesday, the Mavs rudely hosted the Lakers, resulting in a shellacking similar to the one doled out January 22nd(also in Texas).

Dirk Nowitzki’s approach of 30,000 career points — a monumental achievement to add to the career resume of one of sport’s most unique superstars. You knew it was going to happen at home, with 20 points and two games left in the aforementioned home stand. However, right from the opening tip it was clear there was an energy in the building that wouldn’t let Dirk fail. And he didn’t.

Because he’s Dirk, Nowitzki hit his first six shots, finishing the first quarter with 18 points and needing just one basket to reach “the moment”.

What a moment it was, because Nowitzki hit an iconic fadeaway over Larry Nance, Jr, sending the crowd into hysterics, then drilled a pull-up three to really blow the lid off the place. We were treated to reactions from many of the familiar faces in the crowd, like Tony Romo, Ezekiel Elliot(who were not sitting together because...no, no, we don’t need to get sidetracked), Andy Dalton, etc. Steve Nash provided some comic relief with a taped reaction to the milestone. It was truly a special night, and to be honest, a pretty emotional one. Dirk has meant so much to Dallas sports fans for so long, and there won’t be too many more memories this good left.

At the risk of getting sappy, I’d like to say that Dirk Nowitzki has been a joy to watch throughout his career, that he has legitimately brightened my life by being really good at the children’s game I obsessively watch. But, perhaps more than that, his humility and decency make him a rarity within in the world of celebrity our culture so wrongly admires. So, to Dirk: THANK YOU, FOREVER.

SO, ANYWAY...THE REST OF THE GAME

It will but probably shouldn’t be lost in all the Dirk hoopla, but other Dallas Mavericks also played really good basketball. All five starters scored at least 14 points and were all at least +12. Seth Curry quietly maintains his supreme efficiency of late, with 18 points on 7-12 shooting(and four threes). Yogi Ferrell had one of his better games the last couple of weeks. Off the bench, Nerlens turned in a double double in 23 minutes, and Quinn Cook scored 10 points, a portion coming in mop-up duty.

I WANT TO SEE THIS TEAM MAKE THE PLAYOFFS

I had been firmly in the corner of #teamtank, probably up until a week or two before the All-Star break. Now, it just feels wrong to not want to see as much of this team as possible. They are young, and currently not much good on the road, but I’m not sure I’d take where they currently are in the standings(and lottery position) over getting to see a playoff series.