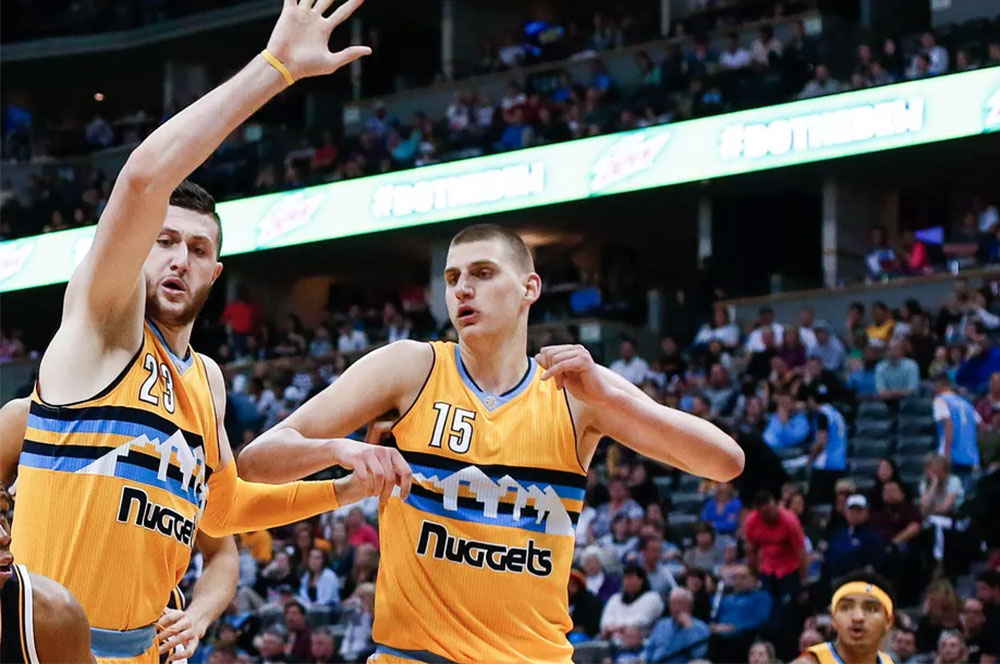 Jusuf Nurkic has flourished in his short time in Portland, but Nuggets fans shouldn’t be upset about it

When the Denver Nuggets traded Jusuf Nurkic and a first round pick to the Portland Trail Blazers in exchange for Mason Plumlee and a second round pick the deal was received with mixed feelings among the Nuggets fans.

The most prominent objection to the deal was surrendering a first round pick but also many recognized the talent and potential Nurkic had and were unsure if “giving up” on him while he was still in his early twenties was the correct path.

Since Nurkic has suited up for Rip City he has rewarded them for placing him in the starting lineup by averaging 14.5 points, 8.2 rebounds and 4 assists, seemingly reinforcing the idea that the Blazers got the best end of the deal. Fact of the matter is, Portland may very well have got the better end of the deal, but what can be lost in that narrative is that regardless of how Nurkic plays for the Blazers, the Nuggets had to move on from him. This is of course because Nurkic had become upset with his lack of playing time and there was simply no way the Nuggets were going to supplant Nikola Jokic as the starting center for the team, a move that no one can disagree with.

Since the trade there has not only been some questioning of whether or not Denver made the right move but also in some cases some down right ugly attitudes from Nurkic fans towards Nuggets fans and vice versa. This is in a word absurd. Denver’s move of Nurkic was motivated by two, and only two factors, both of which are completely legitimate and reasonable. The first is simply Nurkic is not a better basketball player than Jokic right now. The Nuggets certainly gave Nurkic every opportunity to prove that he was capable of being a starting center. In fact, Juka started the first twenty-five games for the Nuggets and twenty-nine overall for Denver this season. In those games he averaged 9.2 points, 7 rebounds and 1.4 assists in 20.8 minutes per game while the Nuggets went 10-19. Jokic meanwhile has been the starting center for the Nuggets since December 15th save for when he was injured. In that time period he has averaged 19.2 points, 10.6 rebounds and 5.7 assists in 29.2 minutes and Denver has a record of 18-15 in games he’s played since December 15.

Now, the production increase is obviously somewhat related to the fact that Jokic gets more minutes, though it is not 1 for 1 in terms of production and minutes played when comparing the two centers. Simply put, Jokic has produced at a higher level while on the court and the stats back it up. What’s truly important though is the team record and the recognition that Jokic’s superior play is the reason why he got more minutes and thus more production. It comes down to a very basic but true statement: Nikola was the better of the two options at starting center for the Nuggets.

The second reason Nurkic was traded was because he had becoming increasingly frustrated with his role on the Nuggets and it had started to affect both him and the team. There’s no hard stats to go off of on this reason but ask any media member who is close to the team and they will admit, if nothing else, that Nurkic was unhappy. Hell, forget asking the media members, Nurkic said so himself. The key excerpt from when he voiced his frustration is the following:

"I’m 23 years old. I’m not here to sit on the bench. I’m here to play basketball. And it’s a tough decision for me, from a starting spot and 20 minutes to four straight (games of not playing). … You control what you control, and I let my agent do the rest of the stuff."

Reading between the lines there it’s clear that Nurkic was going to let his agent push for a trade while at the same time he would continue to do his job. The problem of course was that’s not really what happened. While there’s very little to go on as far as reports about Nurkic not working hard there were rumors that when he left the bench during halftime of a game he in fact had left the arena and the team had to send someone to bring him back. If true (and I trust my sources on that rumor absolutely) it’s a very real example of how Nurkic’s attitude had got to the point of no return.

All this being said, the point of this article is not to bash on Juka but it’s important to point out that the Nuggets motivations to move him were not because they didn’t think he was talented or had potential, they moved him because they had a better option at his position and because his growing discontent was becoming an issue. Therefore, knowing all this it should be no surprise to anyone that he is now excelling in his starting role with the Blazers, small sample size though it may be. Nurkic has all the physical tools to be an excellent center in the NBA, he has excellent passing skills and he has a lot of room to get better given how little basketball he’s played in comparison to other players in the NBA. Now that he is in a role that more suits where he is at skill wise he’s making the most of it and THAT’S OK. Nurkic is a human being like all of us and his discontent with his role and the way he handled it aside, he’s a good and decent person who was active in the Denver community and never did anything off the court that could be considered detrimental to the NBA or the Denver Nuggets franchise. Rooting against him now for any reason other than the Blazers are in a tight playoff race with the Nuggets is petty and childish. Likewise, criticizing the Nuggets for moving him when it so clearly was what was needed or criticizing the coaching staff for correctly going with Jokic as the starting center is foolish.

I don’t wish any ill will on Nurkic, I think he can become a great center, in fact I’m rooting for it. If Nurkic excels with the Blazers and helps push them back into playoff contention for years to come while Jokic stars with the Nuggets and likewise makes them a perennial playoff participant then we as fans reap the benefits. Not only will our respective favorite teams be going to the playoffs but we will be treated to a Nurkic/Jokic rivalry for years to come and how bad ass would that be? There are so many angles: former teammates where one supplanted the other, young centers who rose to stardom at the same time in the league, Bosnia vs Serbia and of course divisional foes who see each other regularly. We should all hope to be so lucky as to have Jokic and Nurkic both excel in the NBA.

Its understandable when a player leaves, especially after how things were at the end with Nurkic and the Nuggets, for fans to stop giving the benefit of the doubt and increase their criticism. In fact it’s pretty much human nature. However the simple fact of the matter is Nurkic was traded; the issues between him and the Nuggets are OVER. Nurkic has moved on, the Nuggets have moved on and it’s time for us as fans, whether it be Nurkic fans or Nuggets fans, to move on as well. Consistently dwelling on issues of the past, especially one that appears to have been resolved to the benefit of both parties, is nothing short than a futile exercise and a waste of all of our time.