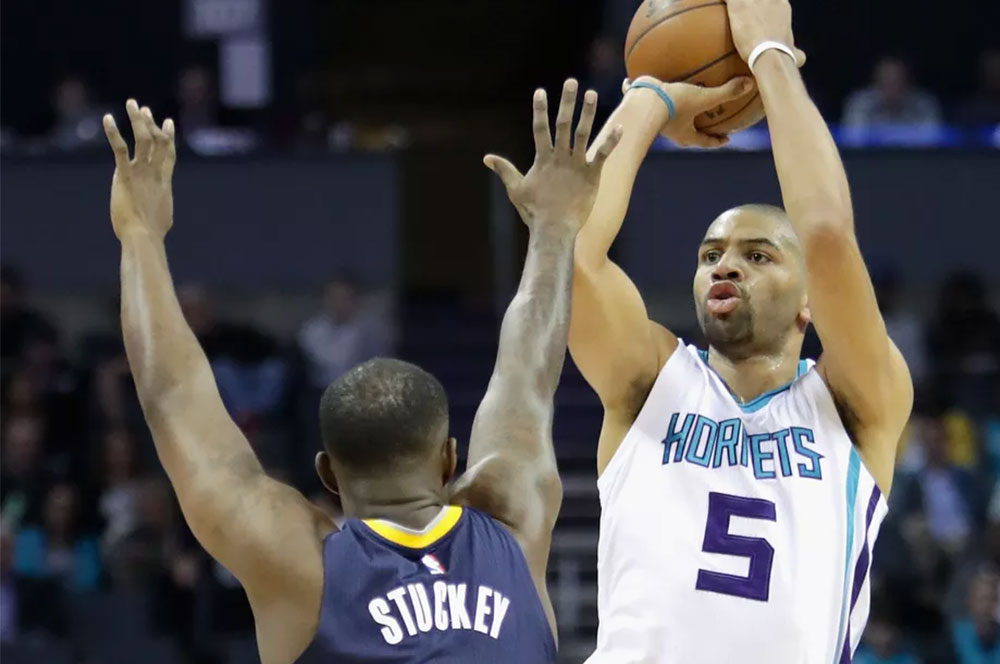 The Hornets have won four of their last eight games thanks to stellar performances from Kemba, Batum, MKG, and Zeller against the Pacers Monday night.

The Charlotte Hornets overcame a terrible third quarter to beat the Indiana Pacers 100-88 Monday night. Kemba Walker scored nine of his 28 points in the fourth quarter to propel the Hornets to their fourth win in their last eight games.

This was, all things considered, an excellent win. The Hornets managed to hold the Pacers — outside of Paul George, anyway — to 39.2 percent shooting from the field and forced 15 turnovers. George’s 36 points were the only reason this game was even remotely close.

Meanwhile, the Hornets scored 100 points on 40.7 percent shooting in large part because of Nicolas Batum‘s scorching first quarter, when he scored 14 points (with 21 points for the game), and Kemba’s aforementioned 28 points.

Marvin Williams, for example, couldn’t hit a thing. He finished with six points on 1-of-7 shooting, including 0-of-5 shooting from behind the arc. Marco Belinelli and Johnny O’Bryant each finished Monday’s game missing all four of their respective shots.

Thankfully, the Hornets didn’t need a ton of offense to pull out this win. It was their defense that won this for them. It’s not often you see the Hornets register 10 steals in a game — almost all of them by playing physically in man-to-man situations. After all, the team’s literally last in the league in steals per game, at 6.7 per contest.

(For reference, the Golden State Warriors currently lead the league in steals per game at 9.7. That is a lot.)

Any game in which the Hornets excel defensively is typically one in which Cody Zeller and Michael Kidd-Gilchrist played well. Tonight was no exception, as both players posted double-doubles.

While MKG did struggle to guard George, he posted his 18th double-double of the season and outside of getting burned in isolation situations had a tremendous impact on the team’s intensity on defense. Zeller finished with 11 boards while MKG finished with 13. He also hit a couple of jumpers if you’re on MKG jumper watch.

Myles Turner and Jeff Teague were hardly noticeable. And the Pacers’ reserve backcourt of Monta Ellis and Glenn Robinson III were exploited on defense.

Seriously, this was an excellent effort from the Hornets. The Pacers currently sit in the sixth spot in the Eastern Conference and the Hornets showed poise and control we’ve seldom seen against them. This in spite of three key players — Frank Kaminsky, Ramon Sessions, and Miles Plumlee — being out for the Hornets.

Each win gets us closer and closer to the playoffs. We’re hardly out of them.

The Hornets’ next game is on Wednesday against the Miami Heat, whom sit in the ninth spot. Let’s see if the Hornets can keep this momentum going and start stringing together some wins.