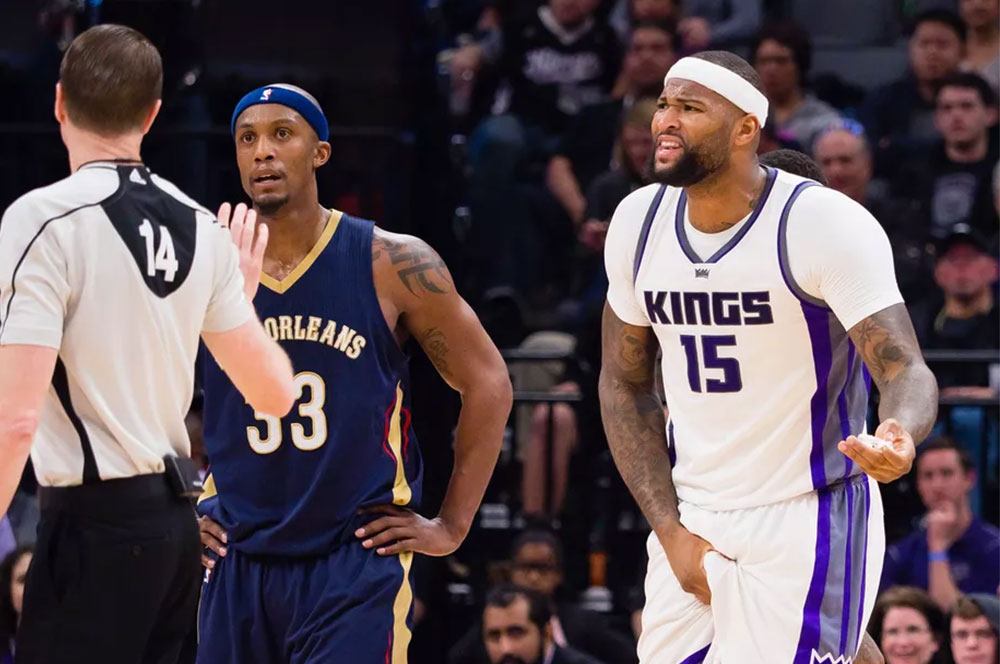 On the list of important Kings games over the last decade, tonights matchup with the New Orleans Pelicans was a lot higher on said list than I’m comfortable admitting. I’m claiming this mostly tongue-in-cheek, as you could make a very legitimate case that the Kings should not be fighting so hard for the 8th seed, but we know that the 8th seed is a very real goal the Kings are aiming for this season, so from that perspective, yeah, kind of important?

The Kings and Pelicans slopped their way to a pretty tight first quarter. I didn’t think either team looked particularly crisp. DeMarcus Cousins led the Kings in scoring early despite playing fairly timid as he continues to figure out how to play with emotion and energy without arguing himself into another technical-foul-based suspension.

To make matters worse, he followed up that timid play with a somewhat questionable technical foul towards the end of the first quarter after hitting Donatas Montiejunas in the face with the back of his hand. Because NBA technical foul rules are what they are, Cousins is facing another mandatory one game suspension the next time he commits a technical foul provided the NBA doesn’t rescind the one he received tonight. Not great!

The Kings came out similarly sloppy to start the second, while Anthony Davis started to get his offense going for the Pelicans. The Kings’ bench sans Ty Lawson did not play well in this stretch. I don’t want to give Lawson all the credit for the recent solid play of Willie Cauley-Stein and Malachi Richardson, but they sure do miss playing with a guy that would much rather pass it to them than anything else offensively.

Momentum finally shifted in the Kings’ favor late in the second quarter when Buddy Hield (accidentally?) grabbed DeMarcus Cousins in the eggplant emoji, resulting in a flagrant two and automatic ejection for Hield.

On the back of Darren Collison, the Kings managed close what was a double-digit gap, and headed into halftime down just three. That’s a pretty solid result considering how meh the Kings played for most of the first half.

The Kings came out in the second half looking a lot like the team we’ve seen the Kings look like in the second half of some of their recent comeback victories. There was a noticeable uptick in energy, and the now-shooting-with-confidence Ben McLemore gave the Kings two much-needed threes early, forcing Alvin Gentry to call a timeout. Keep doing these things, Ben.

The Kings went on a 27-6 run after Hield’s illegal grope, by the way, before momentum briefly shifted back to the Pelicans after Matt Barnes picked up another costly technical foul. DeMarcus Cousins and Matt Barnes need to stop doing that, obviously.

Despite that Pelicans run, the Kings went into the fourth quarter holding on to a 76-73 lead.

The Kings’ bench unit made up for their first half woes with a really solid second half run, not only extending the lead, but allowing Joerger to rest Cousins right up until the 5:17 mark of the fourth quarter. Cauley-Stein, Anthony Tolliver, Matt Barnes, and Malachi Richardson all had noteworthy second half contributions. Good stuff.

DeMarcus Cousins played his best minutes of the night to close this game out for the Kings, and he gave you a little bit of everything. A post-spin dunk, trips to the free throw line, fantastic passing, and one particularly impressive close out on an Anthony Davis drive, stuffing what would have been an easy two points for New Orleans.

As someone who has been fairly critical of Cousins’ play of late, he really needed a nice stretch like that to hopefully get his mind right following what has certainly been a rough and frustrating couple of weeks. The Pelicans had no answer for Cousins late, and the Kings cruised to a relatively relaxed crunch time victory.