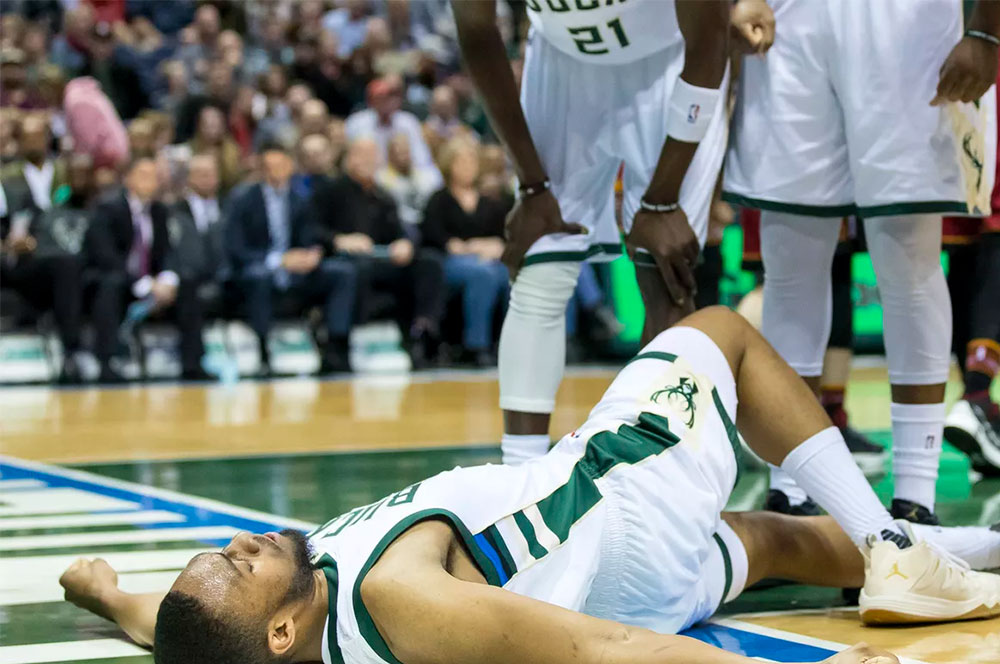 Jabari Parker tore the ACL in his left knee Wednesday for a second time. He was driving to the rim against Luke Babbitt in the third quarter of the Bucks game against the Heat, when he planted his left foot and fell to the floor as if he had been fouled hard.

After he was carried off the court, and in the aftermath of the game, he thought he had hyperextended the leg.

The Bucks reported that it was a sprained knee, and it wasn’t that either. It was a second torn ACL at the age of 21, two years after the initial injury ended his rookie season before it started.

Life isn’t fair. Even the smallest of children realize that early on. It’s frustrating to realize how powerless one is to change that reality. And it seems unfair to happen to good people most of all. Evil wins, and the people who deserve all of the best things are the ones who suffer the most. These struggles are rationalized as tests of faith for the reasonable mind to deal with them. It has to be metaphysical. Otherwise it’s absurd.

That’s not true, of course. Bad things happen to everyone, and the world is generally chaotic.

Parker’s ACL tears could have happened to anyone. They have happened. Players such as Michael Redd and Josh Howard suffered back to back tears. They’re the two most recent examples. It also happened to Baron Davis, Raul Lopez, Danny Manning, and Brent Price. Former All-Stars Derrick Rose and Brandon Roy saw their careers upended by multiple serious injuries, though they weren’t ACL tears. Not to be trite, but these things happen.

Yet, this context doesn’t change the horrible feeling. This sucks so badly.

Jabari Parker—clearly on the verge of an All-Star career next to his running mate Giannis Antetokounmpo—deserves so much better than this. He’s gone through this before, and the insistently hopeful thoughts are that he is going to persevere through this setback, as well. He has time on his side and he proved to be a resilient person via his previous comeback. You don’t come back from an ACL tear to average 20 points and six rebounds unless you’re stubbornly optimistic and a hard worker.

He managed to go from a question mark to fulfilling his predraft hype. He was a co-leader on an eternally ignored Bucks team that had its sight on a postseason breakout. It was all taken away from him in the blink of an eye.

The frustration with these unfair situations is that they’re so odd. They’re outliers. It’s an ACL tear that happened because he planted really hard on one play, a move that he’s done in practice and in games countless times. He was just extremely unlucky this one particular time out of all possible times. Twice out of infinity.

Now he has to face the endless boredom of long-term injury again. It’s not just the physical rehabilitation that’ll dog him, but the mental stress as well. It’s the never-ending and repetitive sessions that never seem to improve your condition, even though you know they’re vital. It’s the feeling of uselessness that comes with being removed from his life’s passion. It’s the isolation and loneliness of it all. It’s the depression that no good gesture from teammates can keep away for long a sinking feeling that you’re alone.

Parker also has to confront the fact that he may never be the same player again; that his explosion and speed may be gone for good. That he might have to change his game completely, at the tender age of 21, just to have a good career. And it’s not easier because he’s gone through it before. It’s an even tougher task for a repeat sufferer.

When he finally conquers all the feelings of doubt and despair, and the strength and conditioning exercises lead to a healed knee, he still has to regain his confidence. Again.

While the recovery of the body is trackable, mental recovery is not. There’s no timetable for Parker to feel comfortable enough to do what he used to without hesitation. It’s currently sad to see this often with Rose. He wants to be the old him, but the distrust for his body, the fear that he may hurt himself again, hinders him.

Parker will need time. A lot of time. And the athletes who triumph over major injuries like ACL tears need to be great; it’s of course much harder to do the impossible twice.

But it’s not entirely farfetched to believe that Parker may do it. There have been athletes who tore their ACLs twice in the same knee and have come back to play at a high level. NFL players Casey Hampton and Thomas Davis quickly come to mind. Davis tore his ACL in the same knee in three consecutive years, yet he’s come back to make two Pro Bowls.

There’s hope for Parker. There has to be relentless hope in the face of such a cruel turn of events. The collection of people recovering successfully from injuries of similar severity to Parkers are few and far between, but it would be a welcome relief if he was to become one of them.

It’s the least the world can do for a kid who has had to rebuild himself once before.