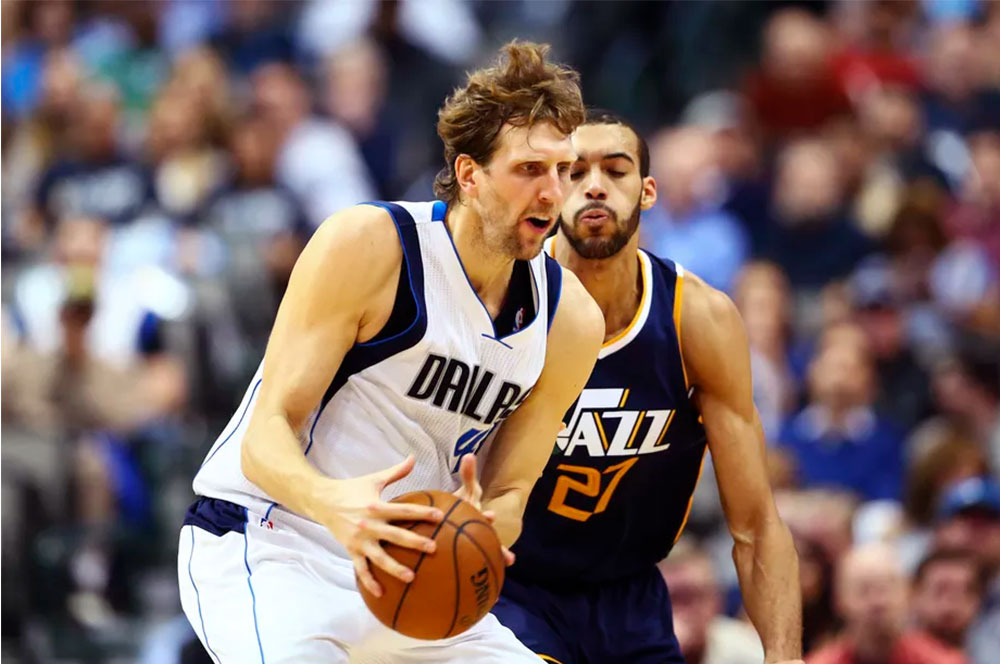 Wow. Where do I start? I was writing the post mortem, as Dallas was down 4 with 21 seconds left. I was frustratedly typing out how f**king close the Mavs got to pulling this off.

THEN THEY WENT AND DID THE DAMN THING.

That fourth quarter was pure insanity all the way through. Then the final 20 seconds was even more absurd. Then Dirk did the Dirk thing to force overtime and handed it off to Barnes to take the victory. I am so happy right now. Okay more celebratory thoughts in a minute, but first let’s walk through the events leading up to the fun.

You could tell right from the get go that Rudy Gobert was going to be a problem (as expected), but the Mavs held it together okay in the first quarter. The Mavs offense stalled a bit while Utah had some success running out of the Hayward-Gobert pick and roll, building a small lead on a steady diet of Hayward jumpers and Gobert screens. Early on, Barnes was the only Mav being aggressive on offense, but as the quarter progressed, the Mavs offense picked up. Devin Harris and Salah Mejri in particular were huge off the bench. Mejri’s first act off the bench was to promptly block Gordon Hayward, firing up the crowd. Once Gobert was off the floor, the Mavs seemed to click on both sides of the ball, and took a 19-18 lead on a Salah Mejri put-back dunk with a little over a minute left.

The Mavs looked kinda great until Hayward and Gobert came back in. The Dallas defense looked really good, moving well, doubling at the right times, forcing a couple of steals, etc. I was really impressed with the ability of Dwight Powell and Harrison Barnes to cover constant screens by Rudy Gobert and Boris Diaw, even if Gordon Hayward being awesome sort of negated it. Speaking of Hayward, he came back in about halfway through the second quarter and ledUtah on a 10-0 run, flipping a Mavs 5-point lead to a 5-point deficit. The Mavs absolutely fell off a cliff in the back half of the quarter, and the Utah run expanded to 21-2. Our guys couldn’t hit a shot to hit their lives, while the Jazz just kept moving and passing until someone inevitably got open for a corner 3. Over and over. Dallas answered with a 7-0 run, but then Utah hit a couple of wide open 3s, and a fastbreak 2 for their own 8-0 run, until Yogi ended the half with a nifty long 3 to beat the buzzer.

If you’re hoping things got better in the second half, I’ve got bad news. It got worse. Gobert started driving and dishing assists and making Dirk look ancient. On top of that, the Mavs’ brains seemed to have fallen out of their heads, because everyone was suddenly sloppy as hell. Turnover after turnover after miscue led to another huge run by Utah. The lead ballooned to 21. And Utah kept hitting threes. So of course right when you’re ready to throw your hands up and watch cooking videos instead, the Mavs start chipping away. They got feisty, and whittled the lead away slowly, but never managing to get it to single digits.

THEN THE FOURTH QUARTER HAPPENED.

Side note - these kids were alright. Dorian Finney-Smith and Justin Anderson had a hell of a couple minutes there at the start of the fourth. DFS had a great drive into the paint on the first possession, and drew the foul. He hit the first, but missed the second BUT THEN HOLY CRAP THERE IS JUSTIN ANDERSON OUT OF NOWHERE TO FLY UP AND THROW DOWN THE PUT-BACK DUNK. Not to be shown up, Yogi Farrell stole the ball on a lazy dribble under basket after the inbounds, and drew a foul on an attempted layup. That could’ve been the highlight of the game, win or lose, but oh no, the Mavs weren’t nearly done with us yet.

None of this would’ve happened if the defense had amped up to eleven. Our guys just put it together, and forced Utah down into the mud. Then Dirk and Seth started lighting up the scoreboard. One of the most fun things was Seth Curry repeatedly driving on Gobert and making him look silly. The last of these tied the game at 96 with under two minutes left. Then a couple of silly, frustrating, inexcusably bad possessions led to two Rudy Gobert slams.

But Harrison Barnes scored a quick dunk. Then Devin Harris got all over ... someone on Utah, not important, oh yeah it was Burks! Harris forced the ball out of Burks’s hand, out of bounds, and on review it was Dallas ball.

The symbolism of what happened next blows my mind. Rick called up a play for the new star, Harrison Barnes. Barnes got the ball, and everyone cleared out. Barnes dribbled around, and then got some separation for a Dirk-esque mid-range jumper. My breath was held. The kid missed. Then Dirk, the great god of Dallas basketball, calmly grabbed the rebound, looked over to Barnes as if to say “it’s okay son, I’ve got this” and drilled the jumper to tie the game at 100 with 3 seconds left. And. We. All. Flipped. Shit.

The game went to overtime, and Barnes (one would assume inspired as hell at seeing Dirk calmly do the damn thing) took over from there. The game was never in doubt from that point, and Barnes just scored effortlessly. It was beautiful.

I’m not going to get into a bunch of specific thoughts at this point, as I’ve rambled on enough by now. Not the normal recap format, I know, but this wasn’t a normal game. I just want to take a minute and talk about my love for Dirk. This was some vintage Dirk awesomeness. Dirk had 20 points on 47% shooting, and his jumper looked as good as I’ve seen it this season. The thing that really made my heart soar was the left layup though. The one-legged fadeaway is the iconic shot, but Dirk’s little back them down, fiddle around in the paint, then spin into the lefty layup maneuver has always been my personal favorite. He used it three times in the fourth quarter, and scored or drew the foul each time. It was classic. It felt like Dirk of old. I’m tearing up a little just writing this. We probably don’t have very much Dirk left, but on this night, Dirk was as Dirk as he’s ever been. I hope everyone loved it, appreciated it, and enjoyed it. I know I did.

And finally, screw tanking—games like this are why we are fans. This is sports. This is fun. This is everything. Let’s do the we believe thing and make the damn playoffs.