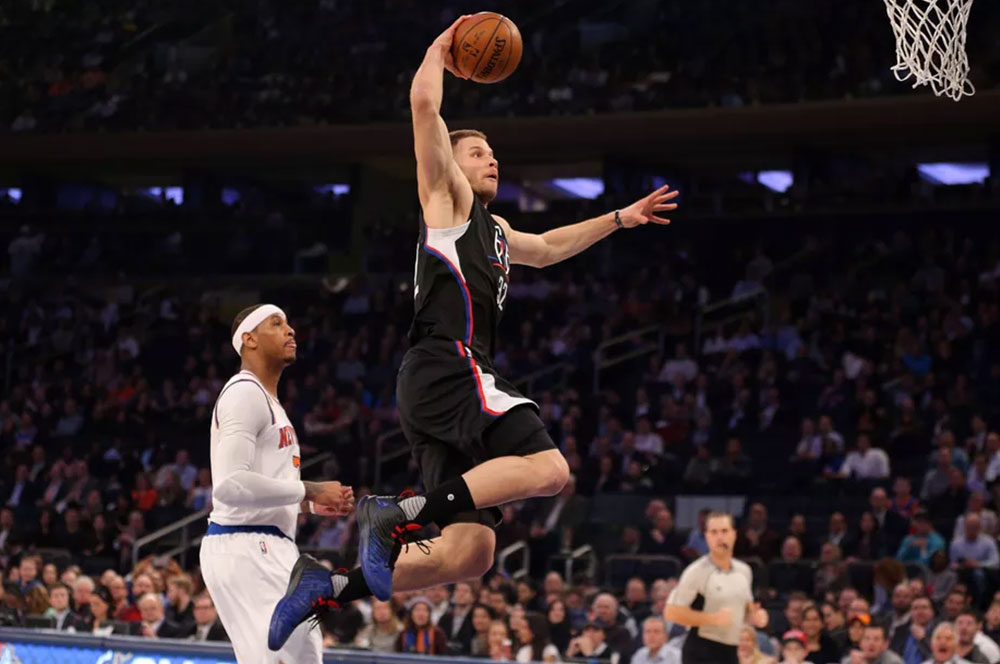 In an exciting shootout against the New York Knicks, the L.A. Clippers ended their multiple-game skid.

If you were looking for an exciting NBA matchup tonight, look no further than the L.A. Clippers versus the New York Knicks. This game had everything: lobs, dunks, wild threes, ties, clutch shots, subplot drama. It even had a Charles Oakley arrest.

Nothing ever ceases to be entertaining at Madison Square Garden, where the Clippers and Knicks faced off for the first of two matchups this season. Celebrities were aplenty, rumors surrounding Carmelo Anthony and Phil Jackson were abuzz, and the two teams delivered unrelenting offense for 48 minutes. In fact, there wasn’t much else other than offense. Despite giving up 115 points to the Knicks, who are 12th in the Eastern Conference standings, the Clippers managed to prevail after trailing by 10 points heading into the 4th quarter.

Blake Griffin and DeAndre Jordan led the way for the Clippers, who desperately needed to bounce back amidst a tough road-heavy stretch. The Clippers had dropped three straight games prior to tonight, against the Golden State Warriors, the Boston Celtics, and the Toronto Raptors. Griffin finished the game with 32 points, 8 rebounds, 5 assists, 2 steals, and 0 turnovers in 36 minutes of play. Jordan finished with 28 points, 15 rebounds, and 2 blocks while shooting 12 of 14 from the field in just 31 minutes. Jamal Crawford, who always seems to deliver in New York, finished with 20 points, 3 rebounds, 2 assists, and 1 steal in 30 minutes. While the Clippers had a difficult time defending the Knicks, there was certainly a greater defensive intensity seen than in recent games. And give credit to the Knicks, who played very well offensively.

Kristaps Porzingis and Anthony led the way for the Knicks, who are now riding a 3-game skid and have had a tough couple of weeks on and off the court. Anthony, who team president Phil Jackson has comfortably spoken negatively about in recent days, has been named in a variety of trade rumors, with the Clippers often brought up as a primary destination. He finished the game with 28 points, 9 rebounds, 2 blocks, 1 assist, and 1 steal in 37 minutes. Porzingis, despite dealing with foul trouble much of the game, finished with 27 points, 6 rebounds, 2 assists, and 2 steals in just 27 minutes. Derrick Rose, who hit difficult, well-contested shots all night long, finished with 20 points, 8 assists, 7 rebounds, and 1 steal in 37 minutes.

The Clippers, still without Chris Paul in the lineup, have had their biggest struggles on the defensive end as of late. That doesn’t mean, however, that their offense has been pretty. Despite maintaining their ranking of 6th in Offensive Rating per NBA.com, they have often looked lost since Griffin’s return. Getting Griffin acclimated and utilizing his facilitating abilities hasn’t been fluid, but their offense looked less careless tonight, and most importantly, they were able to push the pace of the game.

The Clippers, who gave up many well-contested shots, still managed to capitalize well off of Knicks turnovers and get to the basket throughout the game before the Knicks defense could even get set. The Clippers scored 30 fast break points, versus the Knicks’ mere 6. Because the Knicks can defend around the rim and beyond the arc effectively, fast break scoring was a point of emphasis heading into tonight. The Knicks simply could not keep up when the Clippers got out in transition, and it paid dividends.

Getting to the Line

The Clippers, who ranked 3rd in the league in free throw attempts (25.8) and 1st in personal fouls drawn (22.3) per game heading into tonight, needed to use this advantage against the Knicks. The Knicks ranked 24th in opponent free throws attempted (24.9) and 27th in opponent free throws made (19.5) per game heading into tonight. The Clippers went to the line 28 times tonight versus the Knicks’ 18 attempts, and even though the Clippers only made 19 free throws, versus the Knicks’ 15, it precisely made up the 4-point differential in the final score.

Despite the high score for the Knicks, the Clippers played with more intensity tonight than we’ve seen lately. They went to Jordan and Griffin often, as they should have; the duo combined for 60 points and 23 rebounds, also heading to the free throw line 20 times. As a team, the Clippers moved the ball fairly well; despite the success of both Griffin and Crawford in isolation situations tonight, nearly half the team’s made shots came from an assist (22 assists on 45 field goals made).

The defensive woes still remain for the Clippers, but tonight was a bit more encouraging. Rose, uncharacteristically, scored efficiently on very well-contested jump shots. Even a significant portion of the shots taken by Anthony and Porzingis were very well defended. For the Clippers, the main focus going forward should be properly communicating while defending, so that double-teams never turn into capable shooters getting wide open looks.

The Clippers can rest a bit easier tonight, though, coming off of a much-needed win, with two full days of rest ahead of them on the road.