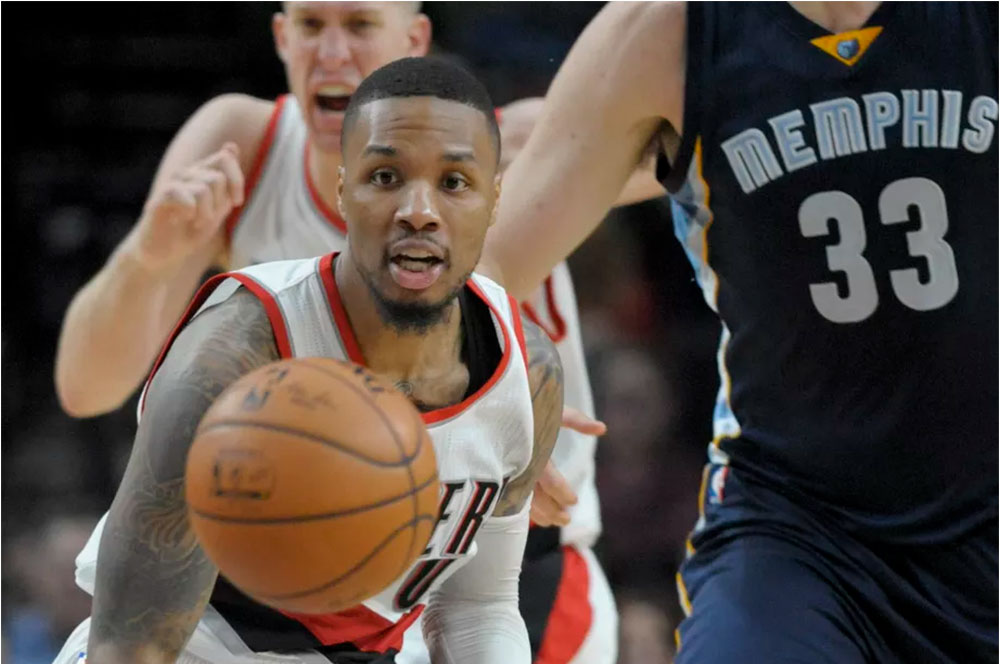 Memphis brought an unstoppable inside game but they couldn’t keep up with Portland’s long-range parade.

The long history of tough, close, crazy games between the Portland Trail Blazers and Memphis Grizzlies continued full force tonight as the two teams faced off in Portland’s Moda Center. A narrow 112-109 Blazers victory took care of the “close” part. A series of deep-dug defensive stands to finish the game covered the “tough” designation.

“Crazy” was provided by huge doses of scoring by All-Stars and near-All-Stars, including a 13-point solo run by Damian Lillard in the final frame that secured the win for Portland. Lillard’s welcome outburst signaled that if the Blazers are going into the night, at least they won’t go quietly.

The opening of this game pivoted (heh) around its starting centers: Marc Gasol for the Grizzlies and Mason Plumlee for the Blazers.

Having been burned by Gasol for the last 42 million outings, Portland decided to camp out in his favorite mid-range jumper position and make sure he didn’t get loose at the rim. It worked. Meanwhile Memphis opted to abandon Plumlee completely on the pick and roll in favor of pinching guards or, well, just standing around in no-man’s land. That didn’t work quite as well. Plumlee feasted on close shots off of easy rolls while Gasol struggled. When the Blazers also proved faster and more energetic than their counterparts, the game took on the look of a blowout. The Grizzlies found partial redemption when Gasol stepped out to the three-point arc—outside the range of Portland’s defensive respect—while Vince Carter played his, “I’ve Got More Experience Than Your Entire Starting Lineup” card. Portland led 28-24 after one.

The Blazers unpacked a beautiful inside-out passing offense in the second period. Allen Crabbe found himself the fortuitous recipient of multiple passes and proceeded to hit 5 of the 7 jumpers he took in the period, three of them from beyond the arc. Every time Memphis sagged into the lane the Blazers made them pay, with tax. Unfortunately the Blazers couldn’t build a wall on the other end. Gasol and Zach Randolph pounded their way inside repeatedly as Memphis racked up points in the paint and at the foul line. Portland’s swirling treble offense produced 34 points in the period but Memphis’ steady bass thrum gave them 32. After having been up as much as 18, the Blazers closed the half ahead by a half-dozen, 62-56.

Portland started the third quarter doing a credible job keeping their opponents away from the rim. It was as if the Grizzlies were trying to duplicate Portland’s second-quarter inside-out attack, but not entirely by choice and to much worse effect. Meanwhile Crabbe led Portland to another 5 threes in the period. With Meyers Leonard coming in late and playing attack dog against Gasol, this should have been the Blazers’ quarter. Unfortunately they couldn’t hit a thing inside the arc as Memphis’ tough defense forced them into mid-range misses. Portland turnovers gave the Grizzlies new life and the Blazers finished the period up by a single point, 85-84.

As so often happens, the fourth quarter featured the strongest trends of both teams turned up to 11. The Grizzlies continued their lane attack and Gasol was devastating. The Blazers arced up shots from distance. Memphis would have gotten the better of the deal except for Damian Lillard, who scored 13 straight points mid-quarter including 3 triples.

The triumphant return of Lillard Time left Portland up 106-101 with 3:45 left to play. A series of lane shots by Gasol and Randolph plus more Portland turnovers helped Memphis stay close, but this was still Portland’s game to lose. They almost did, too.

The Grizz had the ball down 3 with under a minute left when a botched non-call robbed them of a chance to tie. Mike Conley was fouled twice on the way to the rack without a whistle. The second hack stripped the ball, which flew out of bounds. The refs pulled a make-up call, signaling that Memphis would retain possession. Instant Replay—now a reflexive reaction on every call in the last two minutes—squashed that ruling and its ad hoc justice. The video showed both the foul and Conley touching the ball last. Only one could be overturned legally. Don’t make 1997 calls in 2017, guys.

Portland failed to score on the ensuing possession but they stopped Carter at the cup with 14 seconds left to seal the victory. Except Lillard coughed up the ball, giving the Grizzlies another chance...multiple chances as it turned out. After Tony Allen missed a pair of free throws Memphis would corral 2 offensive rebounds in the final 7 seconds. Fortunately Portland came up with the defensive stand of the season, making sure those boards didn’t turn into points. The Moda Center exhaled a sigh of relief and jubilation as Lillard hugged the final rebound for the 112-109 win.

This game was a wonderful contrast of styles. Memphis shot a higher percentage and lived off of a 46-28 advantage in the paint along with a 33-21 edge in free throws attempted. (At least the Blazers didn’t let them dominate the offensive glass. That would have made a dicey situation fatal.) Portland lived at the arc, hitting 16 of 35 three-pointers, a 45.7% rate. Lillard stroked 5-11, Crabbe 6-8. Were it not for their sparkling marksmanship, the Grizzlies would have prevailed.

Make no mistake, though, the heroics of both men came within the offense, not in place of it. Lillard took shots off the dribble but they were both open and appropriate. Crabbe’s shots were all fed to him. He was the dagger in the side of a defense that had other targets as a priority.

Portland’s offense isn’t designed to get shots for specific players. It works best when every open player takes and makes. Crabbe’s contributions kept everybody else single-covered...devastating, interlaced artillery support for Lillard’s frontal attack. Together they made the offense look unstoppable.

Damian Lillard finished with 33 points, 5-11 from distance, 10-11 from the foul line. Free throws and triples are the difference between star and superstar for him and he had both tonight. I will point out as a side note, nobody gets to attribute this to “Revenge for the All-Star Snub” without also asking why it takes a snub and this long into the season to get him to step up like that on a team that’s desperate for wins. So I’m not saying it. I think it was just a good Lillard game and I hope we’ll see a lot more of those, regardless of perceived motive. The only motive that matters is winning.

CJ McCollum played a compact, productive game, filling in the gaps between his fellow guards. 7-11 shooting for 18 points. He committed 5 turnovers and his four misses were all from distance, so we’ll have to ding him a little in efficiency, but it’s worth noting that McCollum seems to be able to slide from first option to best supporting actor more easily than Lillard does.

Mason Plumlee did a great job defending when the Blazers switched on screens, moving his feet with alacrity on the perimeter. He gave the Blazers 10 rebounds, 4 offensive, plus 13 points. Interior defense against Gasol is hard but with a little help from Al-Farouq Aminu, Plumlee at least made Gasol think twice on his mid-range jumpers.

Evan Turner shot only 3-9 but he dished 8 assists and hit 2 of 3 three-pointers he took. He looked as seamless in the offense as we’ve seen.

Allen Crabbe deserves at least half of tonight’s game ball with those 6-8 threes hit, 8-12 overall. The Blazers will never turn down 23 points off the bench and the Grizzlies will never sag down off of Crabbe again. (Or at least not for a little while.)

Noah Vonleh started and once again got in foul trouble, collecting 4 personals in 16 minutes. Al-Farouq Aminu ended up with the bulk of the power forward minutes. He looked great on defense in every situation except defending Zach Randolph in the iso post.

Meyers Leonard had to content himself with only a single three-pointer made but he played tough against Gasol. He seems to relish taking on bigger-name centers.

With Moe Harkless still out of action, Pat Connaughton saw 13 minutes. He dished a couple of assists and scored 2.