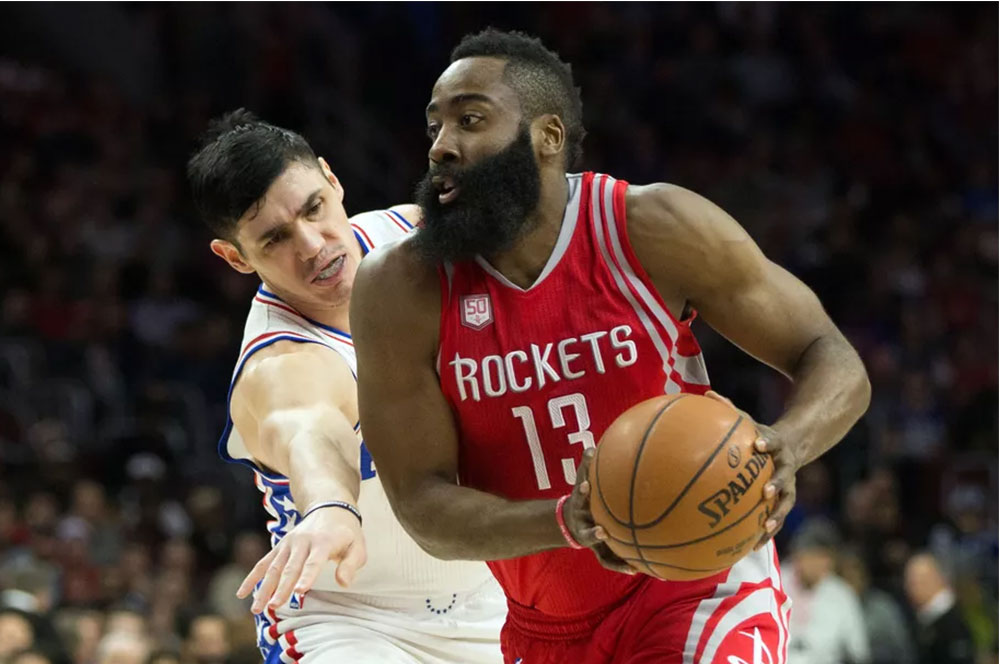 That’s the night that James Harden just had in leading the Rockets to a 123-118 win over the Philadelphia 76ers. And he did it in front of a raucous crowd and a national audience that was almost certainly rooting for the Sixers to win.

As the final score would indicate, this game was never a blowout. The Rockets led by 13 early but every time the good guys looked like they were pulling away, the Sixers went on a run. In fact, Philly led by 5 late in the half before Harden finished with 5 quick points to send us to halftime tied at 61. Philly’s been playing great basketball and were 10-3 in their last 13 contests and hadn’t lost at home since December 20.

Sometimes a basketball game is a tale of two halves, but honestly tonight was basically the same throughout. Other than that 5-0 run to end the first half and a 12-0 run to start the second half, this game was evenly matched. Except one team had James Harden.

The other team had Joel Embiid, and he’s pretty good too. Not “He’s going to be good.” He good NOW. One the first possession of the game, he threw down a left-handed dunk over Nene and you couldn’t help but feel like the Rockets were in for a bad night. Plus, Houston was always going to get his “I’m pissed because I’m an All-Star snub” game.

Credit Nene for not letting that poster deter him. As he said in his postgame interview with Matt Bullard, Embiid got his competitive juices flowing and he responded in kind. Given the start tonight to counter “The Process,” Nene not only dunked over Embiid a few possessions later, but he finished with 21 points on 10-13 shooting (read: dunks). He also had a clutch block on an Embiid 3 attempt late when the Sixers were making a last-gasp run.

I’d be remiss if I didn’t mention Clint Capela. With Nene starting, the Swiss international came off the bench and was basically a seamless transition from the Brazilian. Capela finished with 17 points on 7-11 shooting (read: mostly dunks). He also grabbed six boards in his 21 minutes.

Despite those incredible efforts from the Rockets bigs, it just seemed like it might have been Philly’s night. Philly shot 40% from deep and took 32 free throws. Six Sixers finished in double figures. Embiid had 32 in 28 minutes and was 4-6 from deep. Two different players went 5-5 from the field (Gerald Henderson and Timothe Luwawu-Cabarrot). T.J. McConnell did his best Patrick Beverley impression and was a pest all night, often picking up Houston’s point guards for 94 feet. He finished with 13. Dario Saric had 12 and Philadelphia finished with 17 and-1s tonight (all stats approximate).

And in spite of all of those things, Philly lost because Houston had that one bearded fellow. Harden owned the Sixers tonight. It was worse than the box score shows, which tells you something. He was hitting step-backs, floaters, and 3s. Multiple times he made Saric look like he had two left feet. You could see the frustration from Philly defenders, especially Saric, who threw his arms to heavens after several of Harden’s ridiculous stepbacks.

Philadelphia seemed to have an answer to every Rockets run. And every time they found their answer, James asked another question. Tasked with winning without the services of Eric Gordon once again, Harden answered the bell just like he has all season. Since 1983, there are only three 50-point triple doubles. Harden owns two of them. Look, if you still think he’s not a great player, then you aren’t watching the games. If you think he has a ton of help, then you didn’t watch tonight. And if you think he’s not the MVP, then you’re either a Thunder fan or just wrong.

The Sixers are good. Lately, the Rockets haven’t been. But on the road, with a 3-game losing steak looming, James Harden beat back the storm and gave Houston a win they desperately needed.