Four things from the Mavericks’ loss to the OKC Thunder, 109-98

Four things from the Mavericks’ loss to the OKC Thunder, 109-98

Four things from the Mavericks’ loss to the OKC Thunder, 109-98
NBA 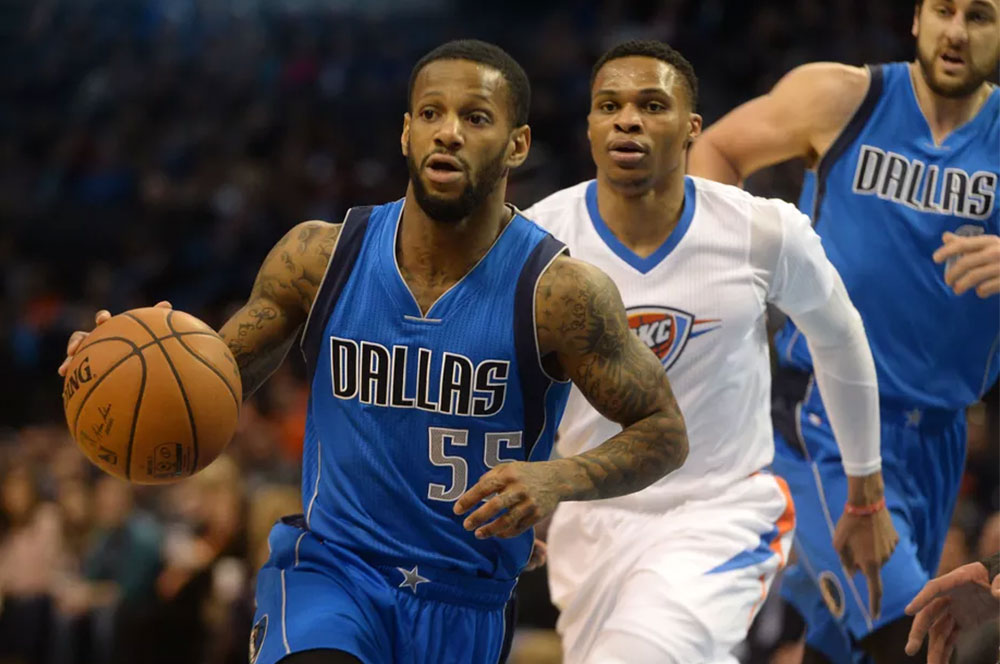 A short-handed Mavs team loses a tough one in OKC.

The Mavs arrived in OKC tonight, the second night of a back to back, with no Dirk Nowitzki, no Wesley Matthews, no Deron Williams, and no J.J. Barea. Somehow, despite foul trouble and injuries, they made tonight’s contest into an actual basketball game. It was a contest they lost, but it was more of game than we had any right to expect.

Sure, the Thunder were also on the second night of a back to back, but the Mavericks’ B and C teams managed to do a lot right tonight, some of which should fuel the hopes of those who still want the team to fight for that eighth seed.

The game got off to a messy start with both teams playing on tired legs. But despite poor showings from both teams in the first (the Mavericks shot under 40 percent and the Thunder had seven first-quarter turnovers), both teams turned things around to give us a pretty exciting first two quarters of basketball, with the Mavs heading to the locker room with a slight 55-53 edge courtesy of a Dorian Finney-Smith buzzer-beater three.

But the game got away from the Mavs in the third, beginning with a 9-0 run from OKC to start the second half, and the Thunder went into the fourth with a 14 point lead. Dallas returned the favor, opening the final period with a 13-0 run. Russell Westbrook was relentless, though, and despite a tenacious effort from the Mavericks, the Thunder got the win, 109-98.

But Dorian Finney-Smith deserves a lot of credit for slowing Russ down in the first half, during which Westbrook failed to record a single assist and shot relatively inefficiently.

And it worked! The Mavericks didn’t have the energy or the talent to sustain their effort tonight, but with Finney-Smith putting a damper on Westbrook’s game, they were able to edge the Thunder out in the first half.

This felt like a scheduled loss for the Mavericks, a back to back in which the team were missing most of their leading scorers. They were able to make a surprisingly good push in the first half, but were ultimately undone by a lack of bodies and foul trouble.

In addition to the veterans who stayed home tonight, the Mavs lost Pierre Jackson in his first career start to a hamstring strain. Jackson left in the second and couldn’t return. By the third quarter, fatigue seemed to have set in, Carlisle was cobbling together line-ups that also seemed to have trouble playing smoothly together, and four Mavericks were in foul trouble with four fouls each (Andrew Bogut, Salah Mejri, Devin Harris, and Nicolas Brussino).

The Thunder may have been playing tired, too, but the Mavs just couldn’t summon the sort of chemistry OKC has with guys like Westbrook and Steven Adams.

Dallas is starting to make threes

The Mavericks started this season in the NBA’s three-point shooting cellar, shooting 34.5 percent (24th in the league) through the end of December. But during the month of January, they’ve improved to 38.5 percent. That change in percentage may not look huge, but it’s a significant improvement, enough to move the Mavericks up to eight in the league this month.

And those numbers don’t include tonight’s performance. After sinking 9-16 in the first half, the Mavs ended the evening shooting 42.3 percent from deep. Harrison Barnes certainly contributed to that total, making both of the threes he attempted, but a lot of credit goes to Justin Anderson and Seth Curry, both of whom made 3-6 from deep.

This is obvious, but given how skeptical so many of us were, should probably be said after every game as penance: Harrison Barnes had a very good game tonight. He led all Mavs scorers with 31 points on 13-26 shooting with two rebounds, two assists, and a steal. Not bad for the second game in as many nights!