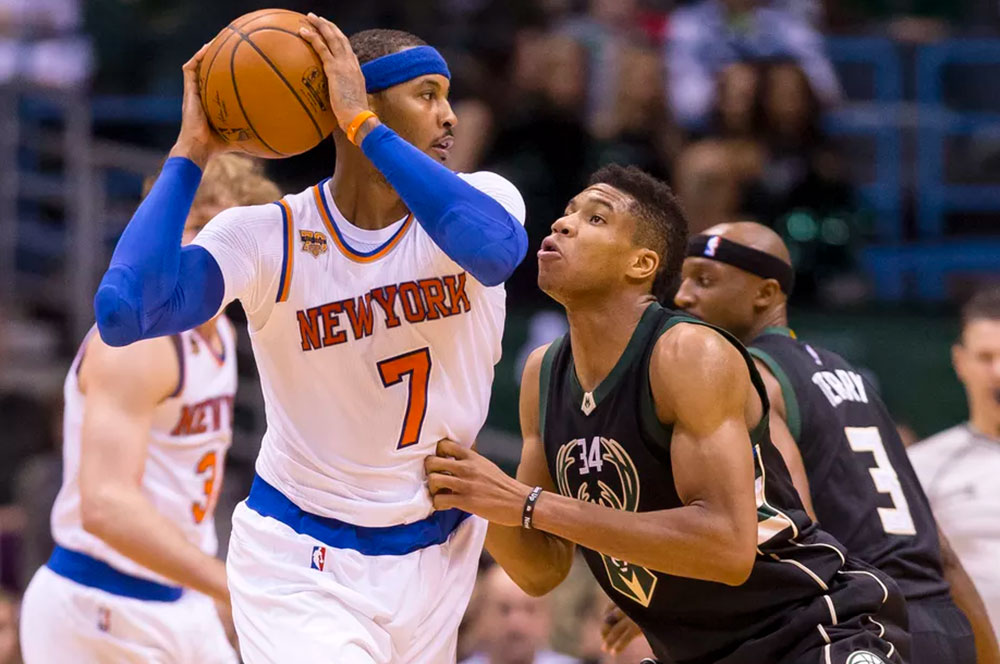 Back in the halcyon days of 2016, the Knicks stole a bunch of wins in games I think we’d all accepted as losses. This evening in Milwaukee, they executed that theft later, better, and to (my) greater surprise than ever. Man oh man. To break so grim a losing streak with such a forceful fourth-quarter comeback felt excellent.

This game happened in the second and fourth quarters. In the second, New York committed a quantity of turnovers beyond the scope of mankind’s counting system. Mathematicians contrived a symbol -- “11” —to represent this theoretical value, but still cannot measure it.

It was just foolish, sluggish stuff on the floor, like travels and bad passes and falling so deeply in love with the basketball that they forgot to shoot it before the shot clock expired. Meanwhile, the Bucks exploited every last open three-pointer the Knicks allowed, which was a lot. Eight straight dropped before Michael Beasley broke the streak. Carmelo Anthony, Derrick Rose, Courtney Lee, and Kristaps Porzingis each offered a bucket or three to keep the goose from cooking all the way through, but it was headed that way.

Fast forward to the fourth quarter, at which point the Knicks had neither uncooked the goose nor let it scorch, and Jeff Hornacek was like “fuck it, if nobody’s gonna defend, I’m letting Ron spin.” Ron spun the whole fourth quarter while Rose (cold, but had been passing well) and Brandon Jennings (just bad) observed, and that was the same fourth quarter the Knicks came back from 14 down. Baker helped streamline the offense and put some actual defensive pressure on the ball, which was nice, but that comeback was mainly the product of Melo peeling apart Milwaukee’s over-helping D. Just devoured those saggy doubles. He zeeped passes across the court, he zooped a few buckets in rhythm, he ... well, he zurped a couple iffy shots, too, but he was mostly great, and crucial to the W. 10 assists!

The Knicks needed all of that, because both Joakim Noah and Kristaps fouled out on frustrating plays in the fourth. Porzingis’s hurt the most, because he’d built a lot of the comeback with sequences such as this one:

I’d accepted* a fun but ultimately disappointing finish by the time Kristaps departed with 3 minutes left, but instead New York finished the job with their two six-foulers standing and screaming on the sideline. They actually fought for a few stops, then Melo buried a straight-on bomb of a three, then Lance Thomas saw an opportunity for delicious revenge sitting on the Milwaukee floor — right on the Bucks’s antler -- and he snatched it. 48 hours after Giannis Antetokounmpo gave him the business, Lance met him face-on, poked the ball loose, then pounced on it tits-first like the wind was gonna carry it off if he didn’t. Baker and Lee took it from there for an easy bucket, the Knicks locked up again on the next play, and hoooooly shit, they’d won it.

This team’s problems remain problems, and that second quarter warrants just as much consideration as that fourth quarter, but also fuck all of those ideas entirely because a comeback road win against the team that just broke our hearts is such a refreshing drink right now that I could cry.

I have nothing else. No little notes or anything. That was too intense, too emotional a relief after what Giannis did Wednesday. Like marcus7 said, not tonight. See y’all tomorrow.

(*But man, at the point I realized the Knicks had wasted *another* night they got hot and hit 13 threes, that acceptance would have slipped into despair.)