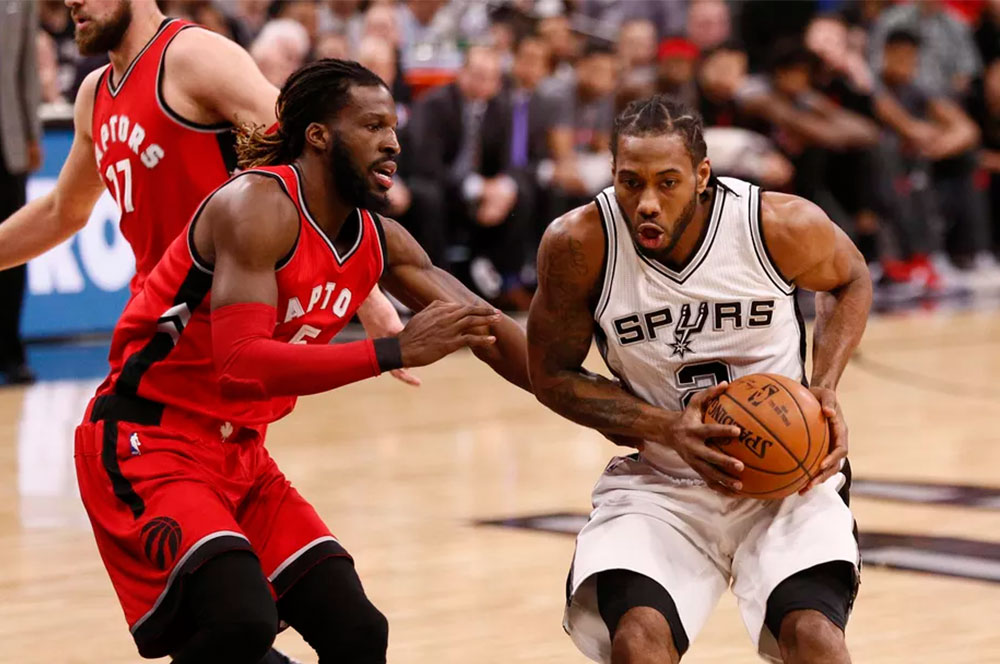 It’s still just January, but the Spurs look to be rounding into form as they displayed their potential against a weary Raptors squad.

What a bounceback performance from the San Antonio Spurs after a tough overtime loss to the Hawks on New Year’s Day. This game was a blast for fans of the Spurs, who looked absolutely stunning against the only team out East that has even a slim chance of sneaking into the Finals not named the Cavaliers.

Toronto came into the game leading the league in offensive rating, posting a ridiculous 113.8 points per 100 possessions, a mark that would be the highest ever for an entire season and their brilliant offense has earned them the fifth-best record in the league. However, the Spurs did a number on them and they slipped to second in offensive-rating, all the way to 113.1.

The Spurs fully took advantage of a road-weary Toronto team that was finishing up a six-game-in-12-night trip away from home that they finished 3-3. This wasn’t lost on the Spurs coach, Gregg Popovich, who said, “we all get tough spots in our schedule and it showed a little bit, that’s a hell of a basketball team...it was a very good win against a great team.”

The Spurs jumped out to a 12-4 advantage in the first three-and-a-half minutes of the contest behind sharp offense from the good guys and the lead pretty quickly ballooned to 26-10 with 4:28 left in the quarter after a couple of three balls from Kawhi Leonard and another from Danny Green.

San Antonio’s ball movement was superb for the entire game, notching eight helpers on their first 11 buckets. They would finish with 32 assists, their third-best total of the year, on their 43 makes.

That sort of team-play makes the squad virtually impossible to beat. The Spurs are now 8-0 when they tally at least 28 assists and have a 16-1 record when they hang 23 assists or more in a game. Conversely, the team is 4-4 when they don’t hit the 20-assist mark.

Kawhi Leonard is certainly feeling better after his return from a bout of gastroenteritis, putting up 13 points on 5-of-6 shooting to go with a couple boards, an assist, a steal and two blocks in the first ten minutes of the game before getting a little bit of a breather. After the game Gregg Popovich noted that Kawhi has his legs back under him. Hard to argue with the eye test, the box and Extraneous G himself.

The Spurs came out ready to go in this one, a refreshing sight to see after a string of poor first-quarter performances of late. The Spurs posted a first quarter defensive-rating of 112.9 in their last three games coming into this one. San Antonio held the league’s best offense to just 18 points on 26 possessions in the opening period. That’s an absurdly stout defensive-rating of 69.2.

There were, of course, 36 more minutes of basketball to play. After giving up 29 to the Spurs in the first quarter, the Raptors tightened up a little and played the silver and black tough for the first half of the second quarter. They threatened to cut it to a single-digit game at 28-39 but SA responded by putting it all together.

The second-half of the second quarter had the AT&T Center rocking with the good guys putting on a dizzying display of highlight-worthy basketball.

By the time the half was over the Spurs had extended their lead to 19, 60-41, behind an incredible 21 points from Kawhi on just 11 shots. The star Spur hit 5-of-6 from deep in the half.

The second half didn’t help the Raptors’ cause, with the Spurs extending their lead to 30 by the time the third quarter came to a close, as Kawhi and LaMarcus Aldridge led San Antonio in scoring with 25 and 23, respectively. The two stars wouldn’t see the floor in the final period of play.

In their own end, San Antonio allowed the Raptors just 17 points in the third, playing with a ton of energy and focus against the East’s two-seed and dropped 28 of their own to put the game at 88-58 going into the final 12 minutes.

With the game well in hand, the fourth quarter became good in-game experience for the end of SA’s bench. Davis Bertans, Dejounte Murray, Dewayne Dedmon, Kyle Anderson and Jonathon “The Juice” Simmons closed the game out for the Spurs.

Your Spurs improve to 28-7 for the season, still remain in second out West two games back of the Warriors and two games ahead of the Rockets in the loss column. With five games separating the three and four seeds, the race out west is down to just three teams.

Tony Parker had a mighty fine performance. He posted a season-high eight assists as well as 15 points on nine shots. He was also careful with the ball, turning it over only once.

Kyle Lowry’s 108-game double-digit-scoring streak came to an end tonight. The star point guard was held to just six points with the Spurs paying plenty of attention to him.

The Spurs blocked a season-high 13 shots.

The Spurs held the Raptors to 4-of-18 (22%) from deep, this season’s best, and they did it against what was the second most accurate three-ball shooting team in the league. After tonight the Raptors slipped to third behind the Spurs and Cavaliers.

The Spurs have now won 24-of-24 games in which they’ve held a double-digit lead.

San Antonio now possesses the second-best net-rating in the league at +8.9.

The Spurs’ 41.1% mark from deep is far and away the best mark in the league, besting the second-best Cavaliers mark of 39.3%. Pop may hate the three-point line, but he knows how important it is and has his guys shooting it more accurately from deep than ever.

It should get a little easier as the Spurs get a night off before they head to Denver to take on the Nuggets on Thursday night. The Nuggets and Spurs last played on April 8th last year in a game the Spurs dropped with Aldridge, Parker, Leonard and Green all getting the night off. The Spurs had won the previous ten contests against Denver leading up to that game. Tim Duncan scored 20+ for the last time in his legendary career in the game.

After the game in Colorado the Spurs will be back at home to host the Hornets on Saturday night to start a three-game homestand. The Bucks and Lakers will also visit the Alamo City.