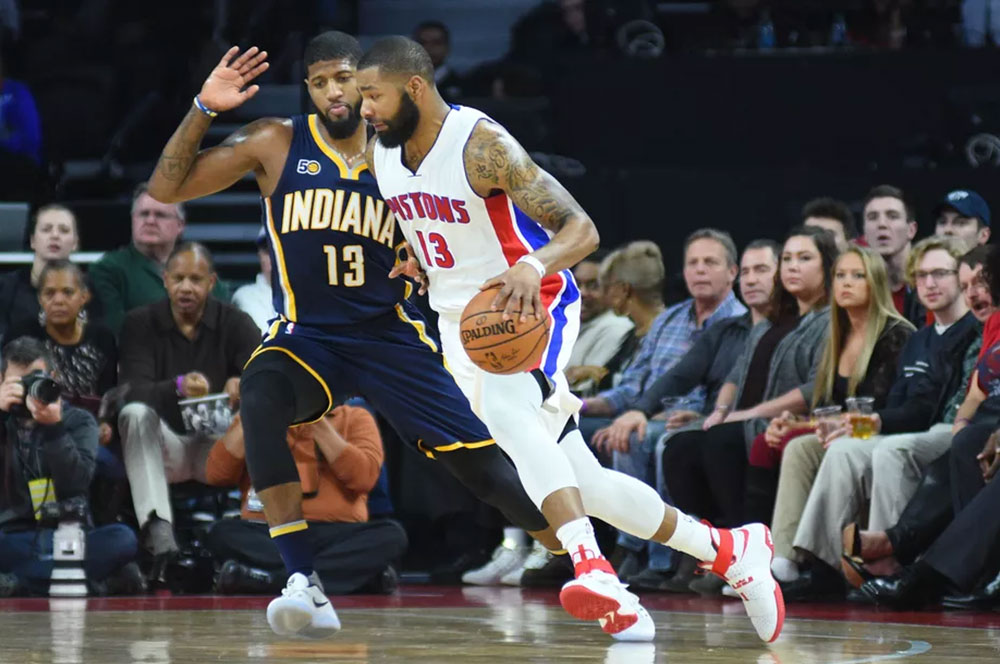 Indiana wrapped up a 121-116 win to boast their first three game winning streak of the season. Paul George scored 13 of his 32 in the fourth to lead the Pacers over Detroit.

While the Indiana Pacers managed to lead most of the way in their 121-116 win over the Detroit Pistons, much of that time was spent withstanding Detroit pushes and runs, getting big play from the Pacers to secure their first three-game winning streak of the season.

Six times in the first half the Pacers pushed their lead to nine or more points, but each time they had to withstand a Detroit push. Both teams shot exceptionally well in the first half, making it easy for both teams to pile up the points as Indiana would head into the locker room with a solid, but uneasy 66-60 lead.

The Pacers have broken 60 points in the first half of each of their last three games, which in addition to being an obvious key in their recent success, has been important for Indiana to withstand stretches in which they struggle. Those struggles once again took the form of rebounding in the third quarter, with Detroit securing eight of their 16 offensive rebounds.

This led to seven second chance points in the quarter, especially dangerous at a time when the Pistons were scorching hot from the field. This allowed Detroit to break through on the scoreboard, forcing the Pacers into a scramble mode that led to a 92-92 deadlock heading into the fourth.

Once there, the Pacers’ defense was rewarded with misses and rebounds while they continued to flow well on offense, leading Indiana to regain the lead and take a double figure advantage into the final two minutes of the game. Detroit had just 12 points through the first 10 minutes, but exploded for 12 points in the final two minutes to make things interesting, but time worked in Indiana’s favor to come away with the win.

Paul George was the biggest factor in closing out the win for the Pacers, scoring 13 of his game high 32 in the fourth quarter, shooting 4-5. George has reached 30 or more points in three of the last four games, which has played a big role in the Pacers finding their first real winning streak of the season.

Not surprisingly, the Pacers are better when George plays as a primary scorer: the Pacers are now 8-2 when George scored 25 or more points. This doesn’t mean George needs to carry the burden of the offense for 48 minutes, but for much of the season, George hasn’t looked for his own place in the offense, seeming content to play the “little things” role he excelled in during the Rio Olympics.

That’s changed since George made his “not having fun” declaration, he’s taken charge as other stars around the league have and the result has been the best stretch of basketball of the season for the Pacers. George has worked his way to the line diligently, going 10-10 tonight with Indiana as a team shooting 26-30 from the line.

The Pacers shot 58.1% on the night, while using the three point line as an efficient weapon at 9-16. They won’t shoot that well every night, but the team saw a 10-man rotation that worked with Monta Ellis leading a second unit that outscored Detroit’s bench 39-32 despite a 22-point outing from Tobias Harris.

Ellis went a perfect 6-6 from the floor and 4-5 from the line to score a bench high 16. If Ellis is willing to take on the sixth man role (which included crunch time minutes with the starters), there are real positives to allowing him to play to his biggest strength: scoring.

This was matched well with Kevin Seraphin’s spot in the rotation. Seraphin scored a season high 10 points with a bench high five rebounds (two offensive). It benefited the Pacers in a big way to have a big who could offset a struggling Al Jefferson, who had six points and three assists.

In the starting lineup, Glenn Robinson III has also found consistency in his role, scoring eight points knocking in a pair of open threes. Myles Turner and Jeff Teague each scored 17, with Teague putting in eight of Indiana’s 26 assists. Despite a few miscommunication turnovers in the first half, the Pacers appear to make the most sense they have at any point this season with their current rotation.

There will be expected trepidation when shots stop falling or Rodney Stuckey returns, whichever comes first, but as long as the overall effort remains sound, there’s no reason for this team to not find consistency in the win column with their upcoming schedule.

The Pacers will return to Indianapolis for a pair of home games beginning on Thursday against the Brooklyn Nets. While the Pacers have cleared the hurdle of winning three straight games, the next hurdle is finding how to take care of business against the league’s worst teams, something that’s curiously eluded the Pacers over the season’s first two months.