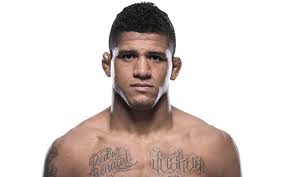 Gilbert Burns is out of the main event at UFC 251 on Fight Island after testing positive for Covid-19 before flying to Abu Dhabi.

The Brazilian, 33, was set to headline the July 12 event on Yas Island with his welterweight title match against champion Kamaru Usman.

Reputable website MMA Junkie reported early Saturday that Burns had returned a positive test as he waited in Las Vegas to leave for the UAE capital. His brother and cornerman, Herbert Burns, and coach Greg Jones, are also said to have tested positive. The UFC has yet to make an official announcement.

Burns, who has won his past six fights to climb to become the division’s No 1-ranked challenger, posted on social media on Saturday: “Devastating news, not feeling well but I’m going to win this battle! Stay safe out there! Much love.”

The news is a huge blow to Burns (18-3 in professional mixed martial arts) and to the first Fight Island event, with the clash against Usman (16-1) one of three title bouts on the opening card. Taken from UFC.COM