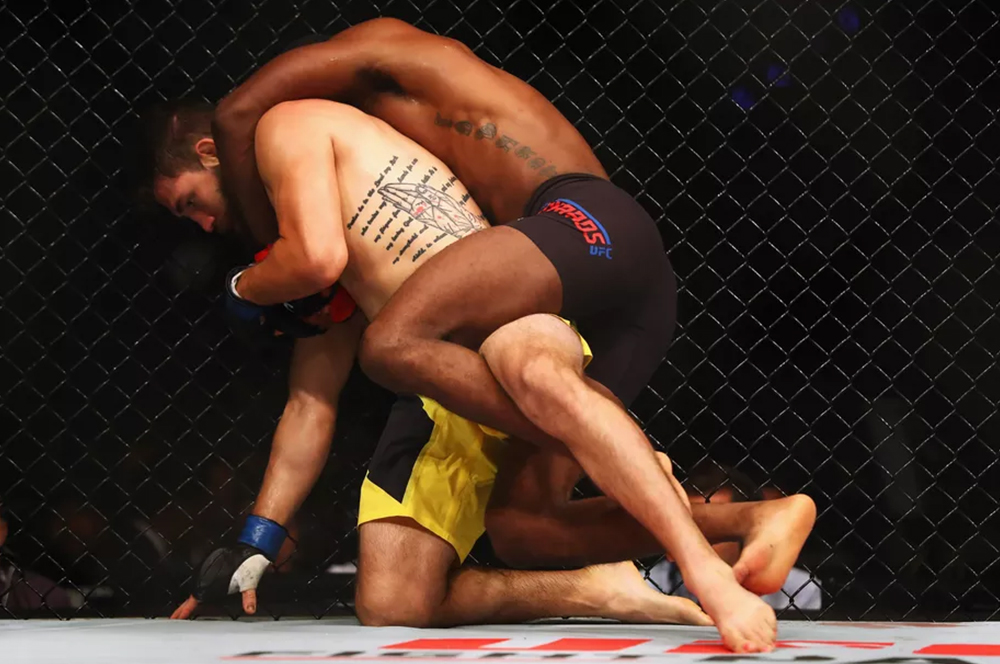 Check out the results of the first three main card bouts at UFC Fight Night: Struve vs. Volkov in Rotterdam, Netherlands.

It’s almost time for the UFC Fight Night: Struve vs. Volkov main event, but first is a recap of the previous main card bouts. Leon Edwards overcame a knockdown to win a tough decision over Bryan Barberena, Marion Reneau picked up a late stoppage victory over newcomer Talita Bernardo, and Siyar Bahadurzada used his powerful hands to spoil Rob Wilkinson’s Octagon debut. Here’s how the fights played out.

Siyar Bahadurzada def. Rob Wilkinson by TKO (punches) at 3:10 of round 2 - Middleweights

Bahadurzada was looking for power punches from the get-go, whereas Wilkinson worked his jab and his wrestling. The Aussie did take Siyar down midway through round 1, but Bahadurzada sprung back up. Wilkinson’s next takedown was thwarted and he ate a hard left hook that stopped him in his tracks. Bahadurzada connected on a thudding body kick and immediately went for a d’arce choke. Wilkinson defended properly and then later finished the round with a powerful takedown.

Afghanistan’s Bahadurzada continued to look for the knockout punch, tagging Wilkinson with a hard right hand. Wilkinson answered back with a nice 1-2. A clubbing overhand right stunned Wilkinson, and his reactive takedown was stuffed. A lunging uppercut and right hand dropped Wilkinson and Bahadurzada was going for the finish. Wilkinson could hardly stand, Bahadurzada battered the wobbly Wilkinson all over the place and got the TKO. Wilkinson was knocked down three times in under a minute and frankly this fight went on for much longer than it needed to.

Bahadurzada’s first fight in over a year ends with his first (T)KO finish since 2012. Wilkinson’s undefeated record is no more, as he drops to 11-1.

Marion Reneau def. Talita Bernardo by TKO (punches) at 4:54 of round 3 - Women’s Bantamweights

Late-replacement opponent Talita Bernardo got her UFC career off to a promising start with a takedown of the #11-ranked Reneau. Marion swept the Brazilian, who transitioned to a kneebar. Reneau escaped the danger and then Bernardo went back to Marion’s guard. Reneau quickly went for the triangle choke and then switched to an armbar. This time it was Bernardo who was able to avoid the submission and she did well to cope with Reneau’s dangerous guard.

Reneau clipped Bernardo with multiple right hands to start round 2. Bernardo changed levels, went for a takedown and may have tried pulling guard, but Reneau stood up. The overhand right was landing with some regularity for the 40-year-old. A superb left hook to the body was followed up by another right hand over the top. Bernardo secured a takedown past the midway point of round 2, but top-position time was short-lived and you could sense that Bernardo was fading. Reneau was picking Bernardo apart with flush, powerful punches.

Bernardo needed to get the fight to the ground ASAP, and she was able to in round 3. She cut Reneau open on the left side of her face with an elbow. Reneau tried to catch Bernardo with a triangle choke, as she did in round 1. There was enough space for Bernardo to maneuver her way out of a dangerous spot. Reneau used the front headlock position to spring to the back and wind up on top. She took the back and went for a neck crank with under two minutes remaining in the fight. Reneau slammed home big ground-and-pound strikes from her dominant position. An exhausted Bernardo was just trying to survived and avoid being stopped, but a relentless Reneau got the TKO finish with just a few seconds to go before the final horn.

Reneau is now 4-2-1 in the UFC, with three of her wins coming by stoppage. Bernardo is unable to get a win on short-notice, as she was filling in for the injured Germaine de Randamie.

The fight began with quality leg kicks landing for both men. Barberena had a body kick caught and Edwards landed a left hand before putting Barberena on his back. Edwards looked to take Barberena’s back, in search of the rear-naked choke. Both hooks were in with under a minute remaining in round 1. Barberena defended well and escaped to his feet as the horn sounded.

Barberena tried to press the action at the start of round 2. Edwards went to work with his boxing, landing a nice 1-2. A jumping kick by Barberena backfired and Edwards immediately jumped on his back. Barberena went back to his feet and tried to pry Edwards off of him, and he was at least able to prevent the takedown. Elbows to the side of the head didn’t deter Edwards from trying to outwrestle his opponent. They returned to striking close to the final minute of round 2. A big left uppercut hurt Edwards and put him down. Barberena threw a series of short strikes and tried to finish the fight. He wound up on top and landed hard elbows. A major turn of events to put the round decidedly in his favor.

Edwards appeared to have cleared the cobwebs to start the third and final round. He threw some strong leg kicks and caught Barberena with a couple of left hands, but “Bam Bam” seem unfazed. Edwards secured a much-needed takedown and connected on some short punches. The Brit took Barberena’s back and tried to get the rear-naked choke. Edwards tried softening up Barberena with more punches, as Bryan tried to get the hooks off of him. With one minute to go, Barberena was upright again, Edwards’ still draped all over him. A late kimura by Barberena proved unsuccessful, and the fight concluded with Barberena throwing a knee to the body after a brief scramble on the mat.

Its a fourth successive win for Edwards, while Barberena falls to 4-3 in the UFC.