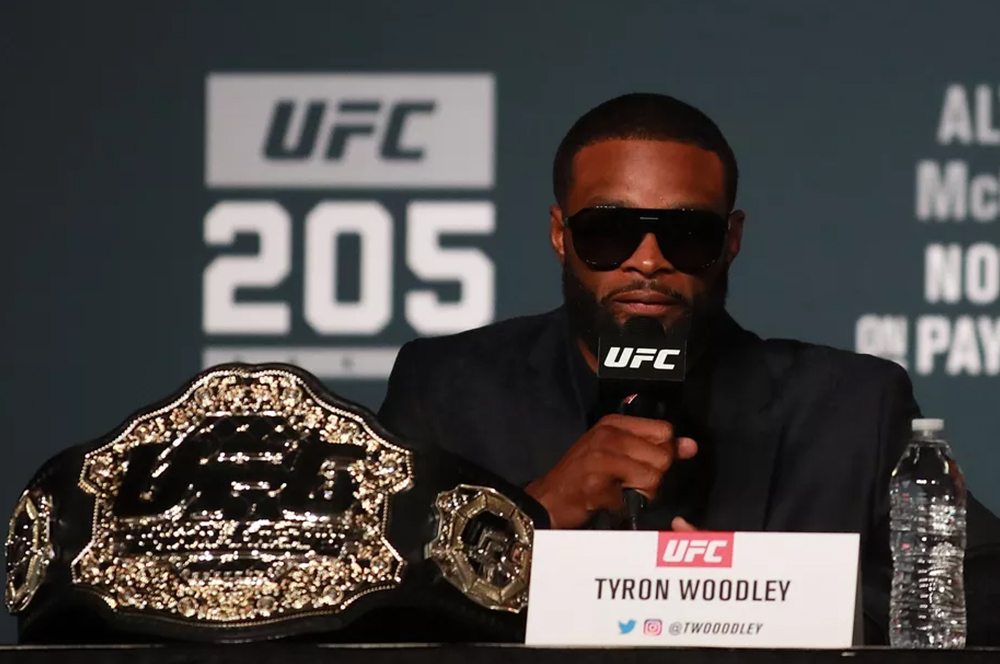 Tyron Woodley received a lashing from fans after his most recent welterweight title defense against Demian Maia at UFC 214, but ‘T-Wood’ plans to make up for it by becoming a two-division champion.

If Georges St-Pierre beats Michael Bisping to become the new middleweight champion, Woodley will look to add a second belt to his collection next year. St-Pierre, the former welterweight kingpin, hasn’t shown any interest in returning to his championship division but Woodley, 35, is determined to fight the Canadian at any weight class.

"Tyron Woodley is going up to middleweight to face Georges St-Pierre if he beats Michael Bisping, because that would establish himself as the greatest welterweight of all time and cap off the best run in the history of the welterweight division," Woodley told Mike Dyce in a recent interview with Sports Illustrated.

‘The Chosen One’ believes GSP is ‘running’ from him.

"I wanted to fight one more time, I was being greedy. I wanted to go out here and beat [Demian Maia] and I wanted to fight Georges St-Pierre in November in New York City. This would've been the greatest year competitively, and after I beat Georges, there is no question that I'll be Fighter of the Year. I fight five title fights in 18 months and beat the greatest welterweight of all time, nobody has done anything like that in our sport. . .

"My brother-in-law just asked me [who I’m fighting next] and I said you know what, if he wins I'm going up there to fight him cause you can't keep running from me."

If need be, Woodley would also fight current champ Bisping for the 185-pound strap, but the NCAA Division I wrestler knows he would be at a considerable size disadvantage.

“I would fight Bisping as well, to be honest. I'm not just saying I want to move up to middleweight because at welterweight I'm a larger size and I feel comfortable at the weight. I have no issues making it, it's not easy but I always get it done.

“To fight Bisping or Georges, I'd love fight either one. But mainly I want to fight Georges.”

Woodley, who defended his welterweight title against Maia in July, tore his right shoulder in the opening round and is currently recovering from injury.

Bisping vs. St-Pierre is expected to take place later this year, November 4, at the upcoming UFC 217 pay-per-view at Madison Square Garden, New York.