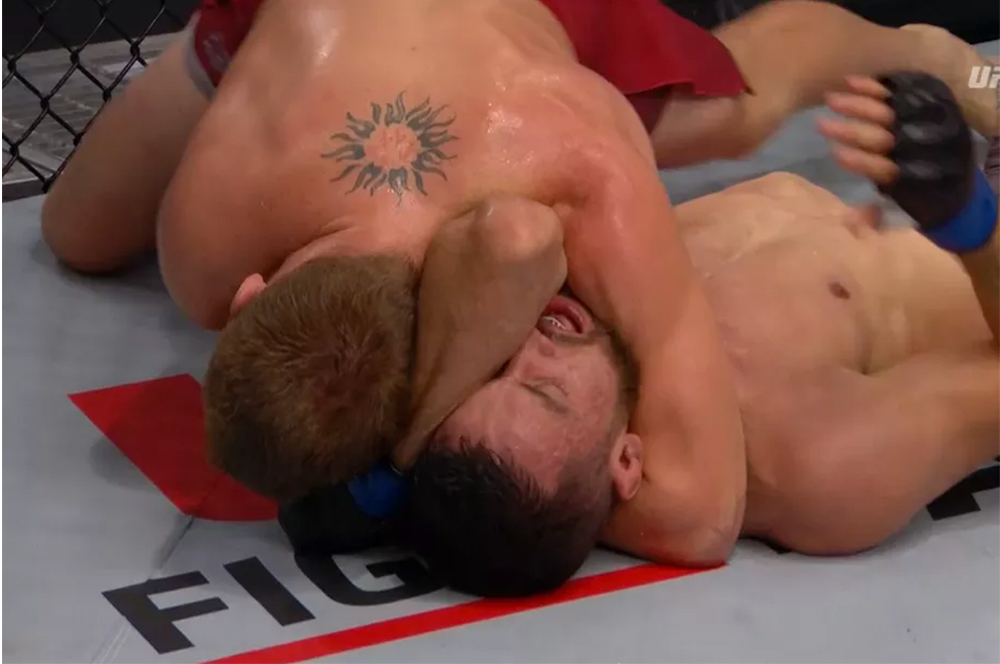 Check out what happened at Dana White's Contender Series episode 8, as three contracts were issued out in the season finale.

Dana White’s Contender Series 8 finished up the season of weekly bouts, 40 fights altogether, as 3 UFC contracts were issued out, making for 16 contracts on the season. Matt Frevola had a strong showing en route to earning his UFC contract, as he dropped Jose Flores in the first round, and went on to secure an arm-triangle in the second round. Allen Crowder won himself a UFC contract by picking up a late ground-and-pound TKO over Don’tale Mayes in the third round of their heavyweight tilt.

Lauren Mueller put on a hyper aggressive performance to punch her UFC ticket, as she picked up a unanimous decision over Kelly Velasco, even earning a 30-26 on 1 judge’s scorecard.

Bevon Lewis scored a 2nd round TKO against a scrappy Elias Urbina in their middleweight matchup, and Dana White claimed Lewis will placed in a developmental league. Adam Antolin picked up a razor-thin split decision over Casey Kenney in an all-out war, as the flyweights stood in front of one another, launching vicious leg kicks respectively, and each routinely cracking with their hands.

Matt Frevola def. Jose Flores by Submission (Arm Triangle) at 3:32 of round 2: Lightweight

Frevola drew first blood as he landed a buckling right hand that dropped his opponent. Flores recovered rather quickly, and stood up to throw devastating body kicks to the midsection of Frevola. Both men took a bit of a breather at the midpoint of the opening round, as each fighter was looking to gain their bearings. Frevola switched gears, and scored a takedown to control the remainder of the round.

Frevola shot in and achieved a double leg takedown to open the second stanza, but Flores reversed the position and returned to his feet. Behind his punches, Frevola closed the distance and earned another takedown, working an Anaconda Choke before taking the back. Frevola transitioned to an Arm Triangle as his opponent tried to spin, giving Flores no choice but to tap.

Bevon Lewis def. Elias Urbina by TKO at 2:47 of round 2: Middleweight

Urbina was first to crack first as he landed a staggering southpaw haymaker to the jaw of Lewis. After eating a few elbows, Urbina shot in for a single leg, but Lewis defended well and obtained top position. Lewis continued to land elbows, as he transitioned to side control, but allowed his opponent to return to his feet. Urbina threw a multi-punch barrage at his foe, but Lewis managed to block the bulk of them. Urbina came out aggressive with a flying knee to start the second frame, and followed up with heavy boxing combinations. Not to be outdone, Lewis lands a thudding right hand that stunned his opponent, but Urbina continued to press forward. Lewis landed a laser of a right hand that sat down his opposition, and followed up with ground and pound to put him away.

The evening’s flyweights went toe to toe right off the bat, exchanging significant punches and kicks in the center of the cage. Both men were landing shots, eating shots, and then returning shots, but Kenney appeared to be the one with a bit more sting on his strikes. Both fighters were content to continue kickboxing to start the second frame, trading brutal leg kicks and cracking punches. Kenney looked to knee from the clinch whenever the fight drifted towards the inside, and Antolin was right there to respond with heavy punches of his own. Antolin turned up the heat in the final minute of the round, as he noticed Kenney starting to slow it down. The flyweights continued to go blow for blow as they entered the third round, but it was Antolin, the seemingly fresher fighter, that was applying the forward pressure down the stretch. Kenney jumped on a Hail Mary Anaconda Choke as the buzzer expired, and aside from that submission attempt, this was basically a Muay Thai fight with 4 ounce gloves.

Mueller opened up the match with a thudding head kick, followed by ample aggression, forcing Velasco up against the cage complete with knees. Velasco managed to find open space, and was able to land a few shots, but Mueller clearly was the harder puncher of the two. Mueller came out uber aggressive to start the second stanza, landing big punches and knees, and forcing her foe to the ground, just to let her back up. Fatigue set in for Mueller, which allowed Velasco to get back into the fight with her straight strikes. Velasco was the much fresher fighter going into the 3rd, as she was able to score regularly with her linear punches. Mueller would find a second wind late into the round, as she landed a viscous spinning back fist that sent Velasco backing up to the cage, and finished up the round with momentum on her side.

Allen Crowder def. Don’tale Mayes by TKO at 4:12 of round 3: Heavyweight

Both big men went right after it, looking land big shots, before Crowder shot in, initiating the grappling exchanges. Mayes spent a solid chunk of the opening round on his back, but ultimately scrambled to his feet before the horn sounded. The heavyweights traded strikes to kick off the second frame, before Crowder again initiated the grappling exchange, to find top position. Mayes was able to slide into the guard of his opponent, reversing the position to eat up some clock. Crowder had a last second Kimora attempt locked up, but the round ended before he could realize the tap. The final round saw Crowder press forward with strikes, and right through a labored spinning elbow attack from Mayes, to score another takedown. Crowder moved to full mount, attacking a key lock, before bailing on the submission in exchange for dropping fight ending elbows, as Mayes did little to properly defend.