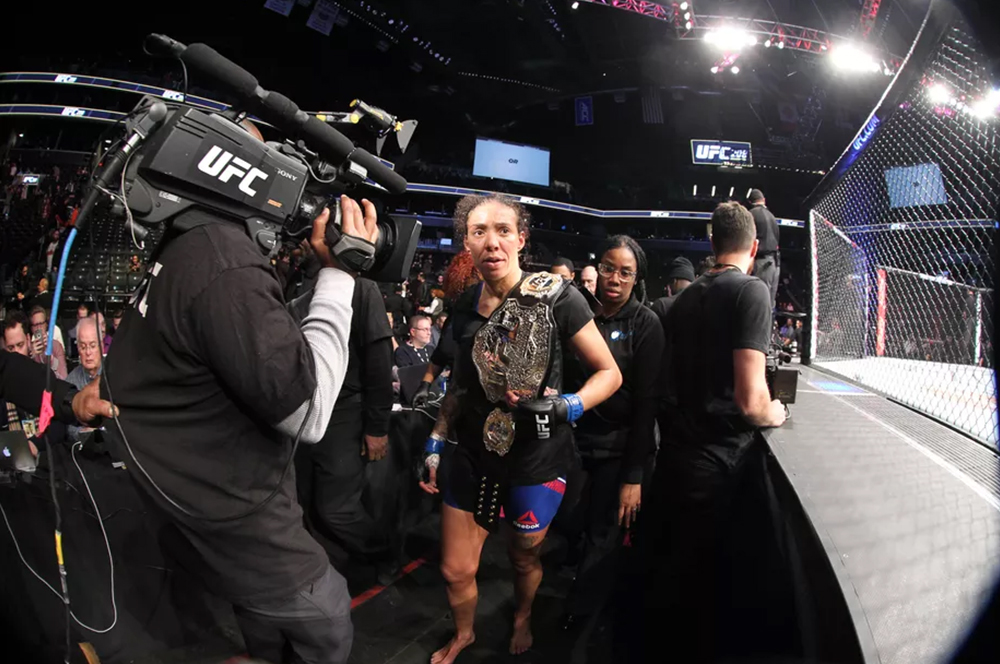 The now-former women’s featherweight champion gave a more complete version of her thoughts on getting stripped of her UFC belt, since the surprise has passed.

Things got out of hand quickly for the UFC’s inaugural women’s featherweight title. The first championship fight in the division, between Holly Holm and Germaine de Randamie, was marred by controversy over a pair of questionable blows at the bell. And from that rocky foundation, a house of cards was built.

That house finally came tumbling down this last week when the UFC announced that it was stripping Germaine De Randamie of her featherweight title with plans to crown the winner of Cris Cyborg vs. Megan Anderson as the new champion at UFC 214. De Randamie’s removal came on the heels of public comments from her and her management that she would never face top contender Cyborg, despite being the only other woman in her division under contract with the promotion. She even went so far as to say that she would return to bantamweight in the eventuality that the UFC pushed forward with the match.

And yet, when the shoe dropped and the UFC vacated the featherweight belt, De Randamie gave a statement of surprise, telling MMAFighting that she “had absolutely no idea” that she was being stripped. An odd thing to say, for a fighter whose manager had said only weeks earlier that she was prepared for such an eventuality. But, whether the shock had worn off, or she’d just had a little more time to choose her sentiments, the former featherweight title holder issued a more detailed statement on the loss of her belt this week on Instagram (via Chamatkar Sandhu).

“As many of you know by now, the UFC has stripped me of the call. For those of us who don’t quite know what that means; the UFC has took my title “ because I refuse to fight against their number 1 contender. (I have my reasons) it remains particularly for this news from the media to learn and I regret that it happened this way, but it is what it is! Well I hear you already think she’s scared! What a bad champion! A disgrace to the sport! They don’t deserve to be a champion! “ etc.. etc.. I see it all over. But regardless of what everyone thinks / do, I walk my own path. And you can agree or not. Gutted that I’m absolutely not, means that I quit. This means only that I have more reasons to fight even harder sometimes (literally) for which I am and what I want. The UFC is far away from me!! It’s easy to stand with the crowd. It takes courage to stand alone “Those with memories not dreams!”

UFC 214 takes place on July 29th in Anaheim, California. The card is expected to be headlined by a light heavyweight title fight between Daniel Cormier and Jon Jones. Cris Cyborg vs. Megan Anderson is expected for the co-main event. No word on what Germaine de Randamie’s next fight will be, but she’s made plans to return to 135, and may still be sidelined by a hand injury for the immediate future.