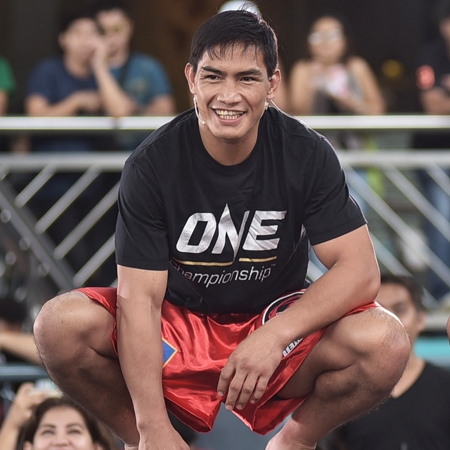 Former 2-time ONE Lightweight World Champion and Filipino mixed martial arts superstar Eduard “Landslide” Folayang will finally make his way back to the ONE Championship Circle.

The 36-year-old veteran is set to see action against rising lightweight star Antonio “The Spartan” Caruso of Australia in a three-round mixed martial arts contest at ONE: INSIDE THE MATRIX, scheduled for Friday, 30 October. Venue and location for this event have yet to be officially announced by ONE Championship.

Folayang says he, along with his brothers at the famed Team Lakay in Baguio City, Philippines, have spent their time in lockdown due to Covid-19 wisely, continuing to hone their skills to stay ready for any opportunity to compete again.

“I’m so excited to be back in action again, especially since having to wait so long in lockdown. We’ve been eagerly anticipating when we will be able to return to competition, and I am glad that moment has finally arrived. We’re absolutely pumped and training very hard right now to put on a good show,” said Folayang.

“The past few months have been very difficult for all of us. Everyone in the world has been affected by Covid-19, especially here in the Philippines. It posed a few challenges for our training early on as we had to stay at home and practice social distancing. Even in isolation, the work never stopped and we used our time to sharpen our tools and skills.”

Prior to the pandemic that has swept the world, Folayang struggled in 2019, going a dismal 1-2 on the year. He started off by surrendering his ONE Lightweight World Title to Japanese rival Shinya Aoki at ONE’s first show in Tokyo, and then succumbing to former UFC Lightweight Champion Eddie “The Underground King” Alvarez shortly after at home in Manila.

Though Folayang came back with an impressive decision victory over Amarsanaa Tsogookhuu later on in the year, “Landslide” suffered another setback just this past January, dropping a close split decision to third-ranked lightweight Pieter Buist.

Needless to say, Folayang believes his next performance is crucial to his career moving forward, and that he’s working on putting himself in the best position to win.

“I can say the results of these next few fights are very important to us, as we haven’t gotten the results we wanted recently. So now, we are really aiming for the best results possible,” said Folayang.

“We are completely focused on doing whatever it takes to claim victory right now. It’s not going to be easy, but we’re ready to give it our best. We want to go in there with confidence.”

He currently brandishes a stellar 7-1 professional record to start his career, and looks to improve on that by taking down a big name in Folayang. Conversely, the Filipino stalwart is wise to take the challenge Caruso poses seriously.

“Antonio Caruso is a strong fighter. I’ve seen his previous fights. I don’t think he’s a guy you can really take lightly. Of course, I am doing everything I can to prepare for his style. As usual, it’s going to be about dictating the pace and making him fight my fight. You can’t underestimate anyone in this game, so I’m not about to start with him,” said Folayang.

“I’ve been training for a very long time now, even if I didn’t know who my opponent was going to be. I just wanted to get myself ready physically, and I just feel so strong right now. Mentally, I’m focused, and getting right to where I need to be.”

ONE: INSIDE THE MATRIX features four World Title bouts in a single night of action.

In the main event, ONE Middleweight and Light Heavyweight World Champion “The Burmese Python” Aung La N Sang of Myanmar will defend his middleweight belt against undefeated top contender Reinier “The Dutch Knight” de Ridder of The Netherlands.

Reigning ONE Lightweight World Champion Christian “The Warrior” Lee of Singapore will make the first defense of his World Title against undefeated top lightweight contender Iuri Lapicus of Moldova.

The final World Championship showdown will feature reigning ONE Women’s Strawweight World Champion “The Panda” Xiong Jin Nan of China, who will make her return to the ONE Circle to take on former ONE World Title Challenger, Tiffany “No Chill” Teo of Singapore, in a much-awaited rematch.

The recently announced Folayang-Caruso showdown will take place on the main card.

Wherever the action ends up, whether on the feet or on the ground, Folayang says he will be more than ready. The Filipino icon is excited to compete once again and remind the world what an elite level athlete looks like at full capacity.

Folayang promises fans the best version of himself when he steps back into the Circle.

“We’ve come up with a strong gameplan, I believe. And we have all the bases covered. Whether this fight is spent on the feet or ends up on the ground, I’ll be ready,” said Folayang.

“I’m going to show the world what a hundred percent of Eduard Folayang looks like. I’m excited to get back in the Circle and do what I do best.”

Before “Inside the Matrix”, ONE Championship will be back with ONE: REIGN OF DYNASTIES II, a previously-recorded, behind closed doors event in Singapore to be broadcast globally this Friday, 16 October.