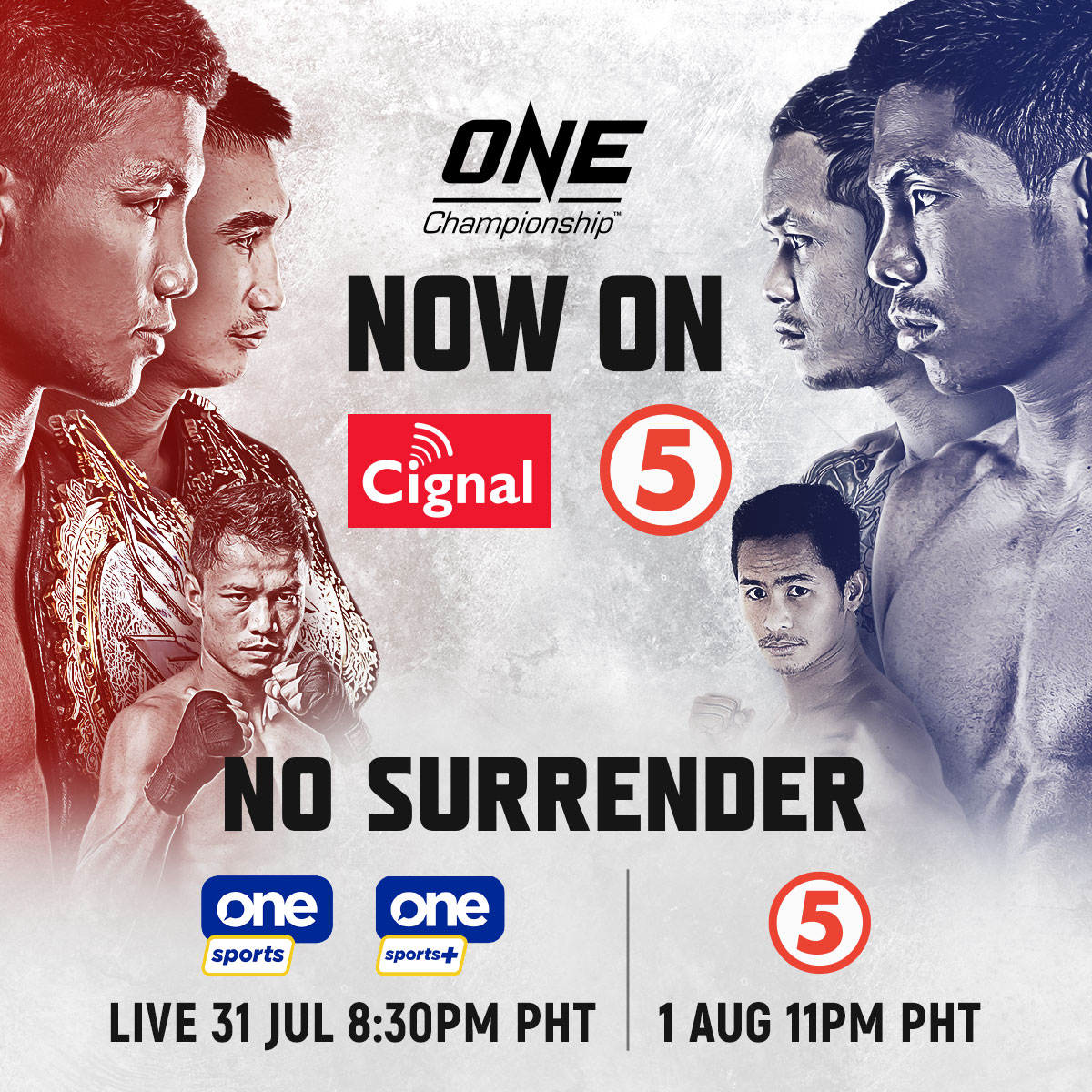 28 July 2020 – Manila, Philippines: Today, ONE Championship and Cignal TV, the leading Pay TV provider in the Philippines, and TV5, one of the largest free-to-air television networks in the Philippines, announced a partnership to include the world’s most exciting martial arts action as well as a variety of sports and entertainment content verticals.

The partnership kicks off with the broadcast of ONE: NO SURRENDER, a live closed-door, audience-free event held in Bangkok, Thailand, scheduled for 31 July 2020.

The event can be viewed on:

“It is with great excitement that I announce a partnership with Cignal TV, the leading Pay TV provider in the Philippines, and TV5. TV5 is the nationwide leader in digital innovation. Together, we will bring new content offerings to our fans, beginning with ONE: NO SURRENDER, live from Bangkok,” said Chatri Sityodtong, Chairman and CEO of ONE Championship.

"We are very excited to bring ONE Championship to all Filipino viewers on our Pay TV and Free to Air platforms. It is a welcome addition to the growing list of world-class sports properties that we offer. ONE Championship is one of the fastest growing MMA and content brands globally and is a key platform where Filipino athletes have competed at the highest level with some of the best fighters in the world. With TV5, One Sports and One Sports+ showing not only the live matches but also a rich library of other ONE shows, this is yet another step in our continued mission to deliver the best sports content to all our viewers and subscribers,” said Robert P. Galang, President & CEO of Cignal TV and TV5.

“Fight Sports has always been a strong content offering in Cignal TV. When the opportunity for a partnership with ONE Championship presented itself this year, we knew it was something we could not pass up. It started out as a one-off broadcast of ONE’s 100th event in October 2019, and because of the event’s success on our platform, we knew that a partnership like this was something that would definitely excite our Cignal TV subscribers,” said Sienna Olaso – FVP, Head of Channels and Content, Cignal TV. "This partnership promises viewers an MMA experience like no other. Filipino MMA fans and sports fans in general will have access to a rich MMA experience, as we deliver ONE Championship live events, ancillary programs, and canned content in high definition every week. We hope you enjoy Cignal TV’s broadcast of ONE Championship, as we bring you exciting world-class MMA action from your favorite Filipino and international fighters. ONE Championship content will be aired on our Pay TV channel, One Sports+."

Fans can also catch Filipino-American and ONE Heavyweight World Champion Brandon “The Truth” Vera along with rising star Mark Fairtex Abelardo who will both feature on the July 29th episode of Sports Page titled “Pinoys on the Global MMA Stage.” The episode will be aired on One PH and One Sports at 6:00pm and One Sports+ at 9:00pm.

Pauline Cunanan
Manager, PR & Communications
(e): This email address is being protected from spambots. You need JavaScript enabled to view it.
(m): +917 311 6990