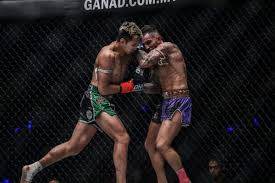 Singapore’s Amir Khan is one of the leading knockout artists on the ONE Championship roster and one of the promotion’s brightest stars, but even he had to start his journey at the bottom.

Six years ago, the native of “The Lion City” had just earned a spot on the famous Evolve Fight Team and inked a deal with the world’s largest martial arts organization.

His first assignment was against Jian Kai Chee at ONE: RISE OF THE KINGDOM on 12 September 2014, and it was an experience that Khan recalls vividly.

“I fought in Cambodia. It was my first fight in ONE Championship, and I had never been to Cambodia before.”

At 19 years old, the young striker traveled with his coach, Heath Sims, and his father to the capital city of Phnom Penh, and he did not know what to expect.

Though he had experience in Muay Thai and some amateur contests to his name, at 1-0 in professional mixed martial arts he was still green in the game.

ONE was a big step up for Khan, and he could tell the difference as soon as he landed.

“I was welcomed with such great hospitality. I was really impressed because at that point in time I was a nobody,” he reveals.

“Why would they treat me so good? Even a new fighter like me. I felt like a superstar. I really appreciated that and I felt really good.”

However, the size and scale of ONE’s operation was also a source of nerves for the Singaporean Muay Thai Champion.

“The whole process was enjoyable but nerve-wracking for me because it was my first time fighting in a big organization, and all eyes were on me,” he adds.

“I felt all the pressure and all I could think about was, ‘I can’t wait to finish the fight and I can’t wait to get out of here and celebrate the victory.’

“On fight day, the rest of my family — my mother and my cousins — came over to see me at the hotel. I was shivering. I didn’t know what I had gotten myself into!” (ONE CHAMPIOSHIP)