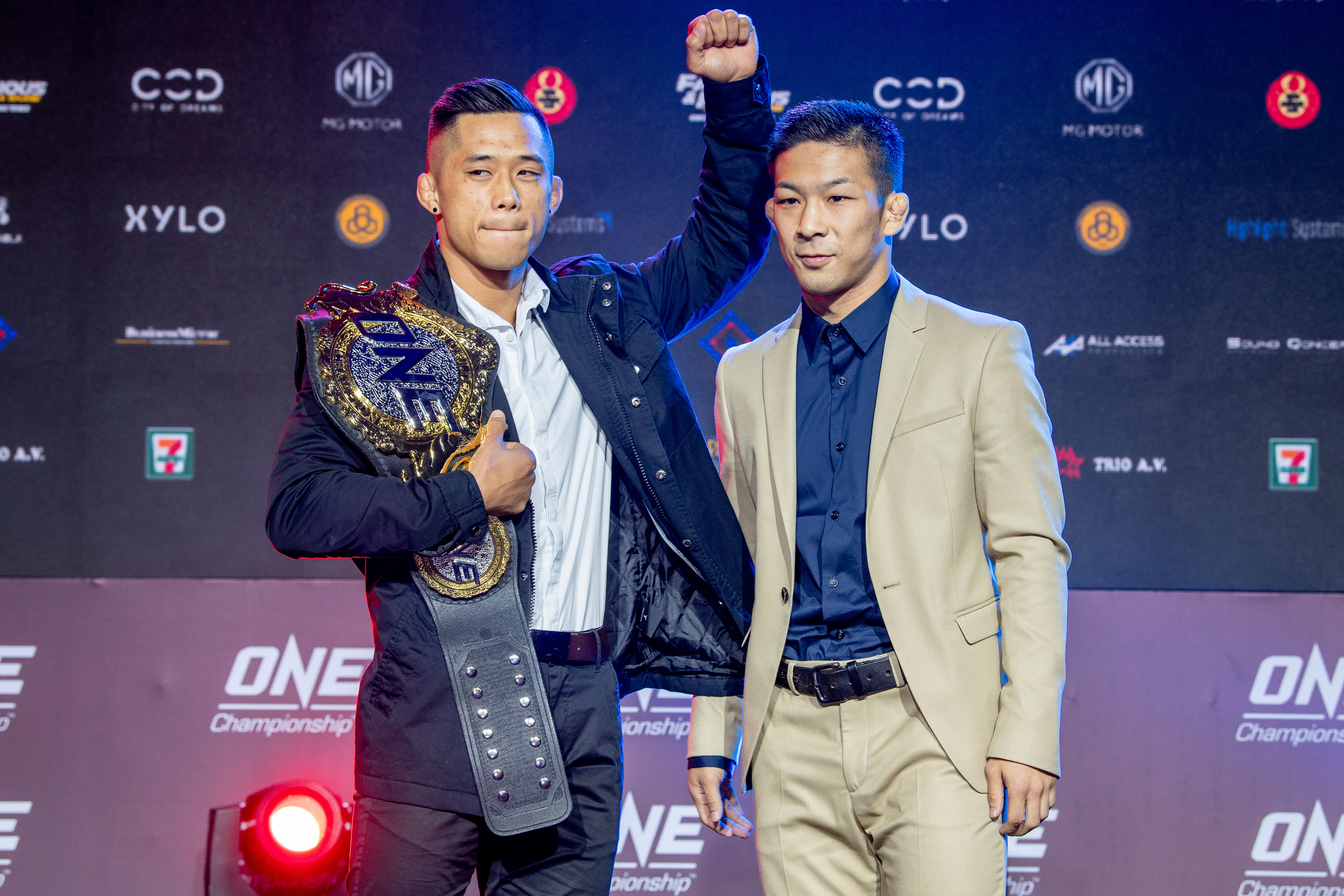 Reigning and defending ONE Featherweight World Champion Martin “The Situ-Asian” Nguyen of Australia and challenger Koyomi “Moushigo” Matsushima stared down at the official pre-event press conference for ONE: DAWN OF HEROES, Tuesday afternoon at the City of Dreams Manila Grand Ballroom in Pasay City, Philippines.

Nguyen will be looking to successfully defend his title for a third time, while the up-and-coming Matsushima gets the biggest test of his career on the main event of ONE: DAWN OF HEROES on Friday, 2 August at the Mall of Asia Arena.

“I hope you guys are as excited as I am, being able to come back here and compete in front of the Manila fans and Filipinos. First and foremost, I’m just happy to compete at the highest level,” Nguyen said of his upcoming title-defense. “I want to say congratulations to Koyomi Matsushima in earning his title shot by winning his last bout decisively. It’s an honor and I’m excited to go up against a warrior who puts it all on the line as much as I do.” 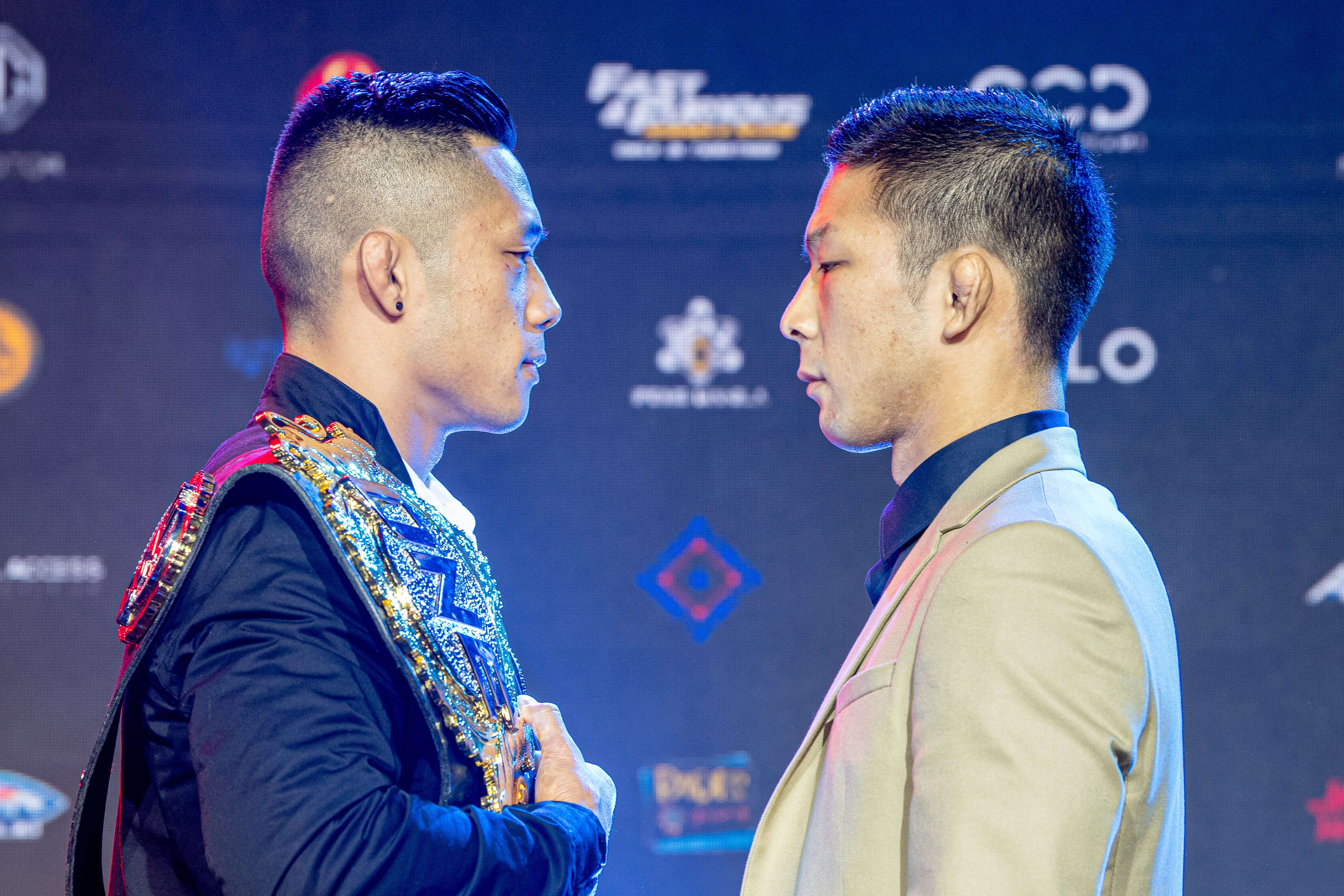 In the co-main event, newly-crowned champion Jonathan “The General” Haggerty of the United Kingdom will be putting his ONE Flyweight Muay Thai World Championship on the line against Thai challenger Rodtang “The Iron Man” Jitmuangnon.

Haggerty stunned the martial arts world with a dominant win over Muay Thai icon Sam-A Gaiyanghadao to capture the title, while Rodtang is undefeated in his ONE Super Series run.

“I’m fighting Rodtang Jitmuangnon. He’s a very come-forward fighter. I’ve been training hard. I know what I’m going to expect and I have a game plan which I always do. Last May, I defeated Sam-A Gaiyanghadao for the ONE Flyweight Muay Thai World Title. This title is going to be staying with me. This is what I do. This is what I love. I’m here to stay champion,” said Haggerty.

“This is my second time to compete in Manila and this is the biggest card ever in Philippine history. This is also the most important bout of my career. Fighting for a world title in ONE Championship is something every fighter dreams of. To all my fans around the world, please support me this coming Friday. I will do my best,” said Rodtang.

Both Folayang and Alvarez are looking to bounce back after their losses back in March, and a win on Friday night will move them one step closer to the ONE Lightweight World Championship.

“I’ll be facing Eddie [Alvarez]. He’s one of those athletes that I spent a lot of time watching before. He says this isn’t the right time, but I believe it’s God’s time. It’s a huge honor for me to be able to test my skills against him. My preparations have gone well. I lost my belt last March. That chapter of my career has closed. It’s time to write another chapter of my journey,” said Folayang.

“I rarely come as a nemesis to a country. Usually, I’m the guy holding the belt. It’s unusual for me to be the bad guy, but I promise you if I’m the bad guy, I will not disappoint. I respect Eduard [Folayang]. I respect everything he’s done not just as a fighter, but also as a human being for his community. This is what this sport is all about. It’s beyond what goes on in the Circle,” said Alvarez.

Johnson is coming off a second-round submission victory over Yuya Wakamatsu in Japan last March, while Wada handily defeated Gustavo Balart in Manila back in April to set up this exciting flyweight contest.

“I’m very much looking forward to taking on Tatsumitsu Wada. It’s the second round of the ONE Flyweight World Grand Prix. Being a kid, growing up watching Japanese mixed martial arts, I could never imagine myself actually competing against the best in the world and hopefully eventually win the Grand Prix,” said Johnson. “I’m going to battle a little adversity against Tatsumitsu Wada. I’ve been down on the scorecards before, but I keep on pushing through. I look forward to entertaining you all on Friday night.”

“This week, I’m fighting pound-for-pound the world’s greatest martial artist, Demetrious Johnson. I’m really honored to fight against him, but I have a chance to win. I will do my best to try to stick to my game plan and try to win. Thank you for all the support,” said Wada.