VITALY BIGDASH FACES AUNG LA N SANG IN HIGHLY-ANTICIPATED REMATCH AT ONE: LIGHT OF A NATION 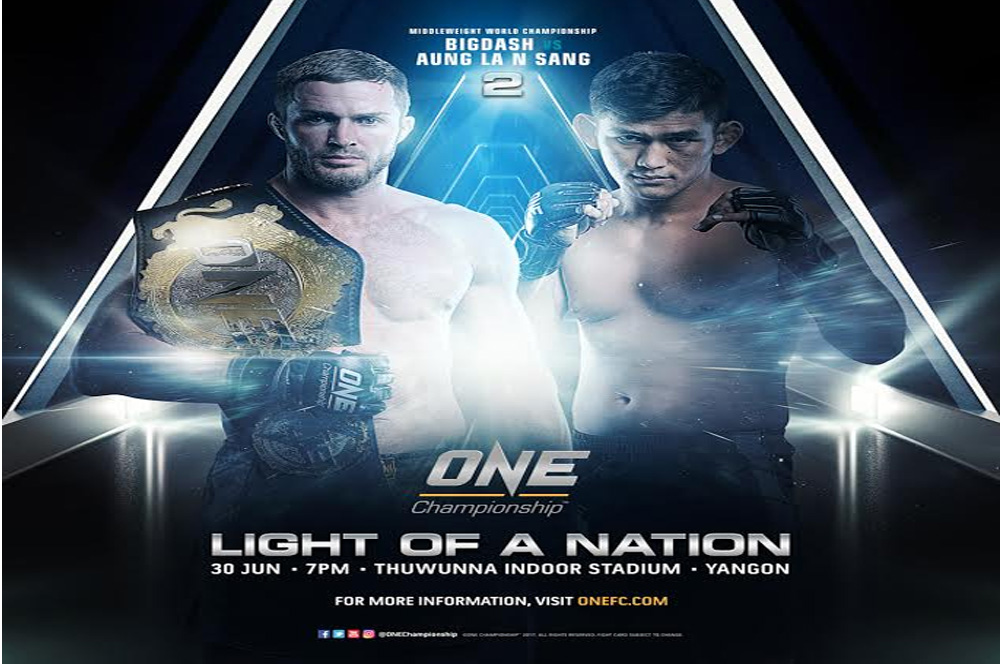 30 May 2017 – Yangon, Myanmar: The largest sports media property in Asian history, ONE Championship™ (ONE), returns to Yangon, Myanmar on 30 June for another blockbuster evening of world-class, authentic martial arts action. The Thuwunna Indoor Stadium is set to play host to ONE: LIGHT OF A NATION, featuring ONE Middleweight World Champion Vitaly Bigdash, who will defend his title against hometown hero “The Burmese Python” Aung La N Sang in the main event.

Ticket information for ONE: LIGHT OF A NATION is available at www.onefc.com

Chatri Sityodtong, Chairman and CEO of ONE Championship, stated: “The first bout was an absolute showcase of incredible skill and unwavering determination, and the rematch promises nothing short of another classic. Yangon’s favorite son, Aung La N Sang, will get another crack at the ONE Middleweight World Championship held by Vitaly Bigdash. This time, it will be on his home turf. Fans will not want to miss all the action that goes down at ONE: LIGHT OF A NATION this June!”

ONE Middleweight World Champion Vitaly Bigdash of Rostov-on-Don, Russia, has proven to be one of the most talented martial artists in the world. Making his ONE Championship debut in 2015, Bigdash captured the middleweight title with a resounding technical knockout victory over Igor Svirid, in one of the most action-packed contests in ONE Championship history. In his last bout, Bigdash successfully defended his world title for the first time against Aung La N Sang, winning by unanimous decision. With an unblemished professional record of nine wins and no losses, Bigdash is set to return to the ONE Championship cage in a rematch against the Myanmar hero.

Vitaly Bigdash, ONE Middleweight World Champion, stated: “Aung La N Sang is one of the toughest fighters I have ever faced, and it will be an honor to come into his hometown to perform. I am not worried about the hometown advantage, because a true champion can fight anywhere and under any circumstance. I am excited to get back inside the cage and expect nothing less than a spectacular showing in Myanmar. Although I respect Aung La N Sang and what he brings to the table, I am returning home victorious, and with my belt still over my shoulder.”

32-year-old top middleweight contender Aung La N Sang is one of the world’s most renowned athletes from Myanmar, whose constricting style has earned him the moniker of ”The Burmese Python”. Born in Myitkyina in the mountainous Kachin State, he belongs to an ethnic minority known as the Kachin. In his most recent outing, Aung La N Sang battled valiantly against reigning ONE Middleweight World Champion Vitaly Bigdash, losing via decision. This time, the Myanmar national hero believes he can produce a different result with better preparation in a highly-anticipated rematch against Bigdash.

Aung La N Sang, ONE world title challenger, stated: “The last fight I took on short notice and I wasn’t at my best. This time, with better preparation and a full training camp, I vow to give a much better account of myself. Competing in Yangon in front of all my fans is such an honor, and I promise to do everything within my power to bring the belt back to Myanmar! It’s going to be an epic battle of attrition, and the better man will emerge victorious on the night.”