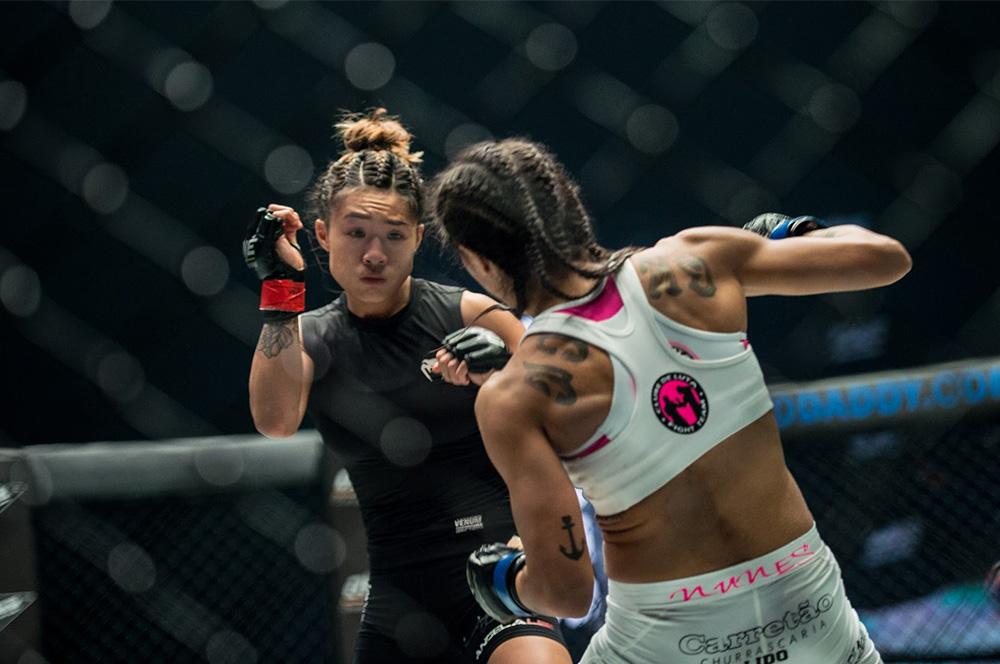 The largest sports media property in Asian history, ONE Championship™ (ONE), once again electrified the Singapore Indoor Stadium as the organization played host to yet another evening of authentic martial arts action. ONE: DYNASTY OF CHAMPIONS showcased the absolute best in local and international martial arts talent, featuring a packed card of compelling bouts that left the crowd on the edge of their seats.

In the main event, ONE Women’s Atomweight World Champion Angela Lee of Singapore retained her title with a spectacular submission finish over top contender Istela Nunes of Brazil. In the co-main event of the evening, ONE Welterweight World Champion Ben Askren made quick work of Malaysia’s Agilan Thani to win via arm triangle choke.

In an exciting main event showdown between two talented females, reigning ONE Women’s Atomweight World Champion “Unstoppable” Angela Lee overcame a spirited performance from challenger Istela Nunes to win by submission in the second round. After catching Nunes with a twister in the first stanza, the bout appeared all but over. However, through sheer willpower and determination, Nunes was able to power through the situation and survive. In the second round, Lee went right back to work on the ground, finishing Nunes with an anaconda choke to retain her title.

“I really love you guys and it’s an honor to fighter here (in Singapore) as your champion. To everyone who is watching from all around the world, thank you guys so much, it means the world to me,” said Lee in the post-fight interview. “The anaconda choke is one of our favorites, so I was really happy to win with that submission tonight.”

In the co-main event, reigning ONE Welterweight World Champion and one of the best fighters in the world pound-for-pound, Ben “Funky” Askren of the United States easily took care of previously unbeaten Agilan “Alligator” Thani of Malaysia, taking his younger foe down to the mat at will with his world-class wrestling and finishing him with an arm triangle choke. On the mat, the former US Olympian caught Thani in a mounted crucifix and pounded on the Malaysian before locking in the fight-ending submission just past the two-minute mark of the first round.

“Agilan [Thani] has a great story, he’s a young kid, and this is not the last time we’re going to see him,” said Askren in the post-fight interview. Askren then proceeded to call out ONE Middleweight World Champion Vitaly Bigdash for a possible cross-division showdown.

ONE Championship Newcomer Zebaztian Kadestam of Sweden took on American Top Team product Luis “Sapo” Santos of Brazil in a scintillating three-round affair. Kadestam, who lives and trains at the scenic beach locale of Boracay, Philippines, weathered the early storm from Santos, who is known for his fast and aggressive starts. Midway into the third and final round, Kadestam found himself in dominant position and drove two hard knees to Santos’ head, knocking the Brazilian out.

In a historical first for mixed martial arts, ONE Championship held the first ever Grappling Super-Match between former ONE Lightweight World Champion Shinya “Tobikan Judan” Aoki and American submission wizard Garry “The Lion Killer” Tonon. After an entertaining display of grappling mastery, Tonon emerged victorious, catching Aoki in a heel hook halfway through the contest, forcing a tap from the former lightweight titleholder.

Former ONE Strawweight World Champion Dejdamrong Sor Amnuaysirichoke returned to action against Adrian Matheis, needing only one round to author a thrilling knockout finish. The 3-time Lumpinee Stadium champion and Muay Thai legend stifled his Indonesian foe with lightning quick kicks and heavy-handed punches. Towards the end of the opening stanza, Dejdamrong landed a powerful left hand that floored Matheis, earning him the knockout victory.

In a highly-anticipated rematch between flyweight contenders, the Philippines’ Geje “Gravity” Eustaquio and Thailand’s Anatpong “Mak” Bunrad went to battle over three rounds to the delight of the capacity crowd. Eustaquio, operating behind his world-class wushu base, tagged Bunrad with pinpoint accurate punches and kicks. Bunrad, a karate champion, had his moments in the fight but it wasn’t enough to claim victory. In the end, it was another close split decision, this time in favor of Eustaquio who avenged his loss to Bunrad two years ago.

Lightweight prospect Amir Khan of Evolve MMA made quick work of opponent Rajinder Singh Meena, wasting no time in bringing the fight to the ground with a successful takedown. Once on the ground, Khan easily took full mount and punished Meena with punches and elbows. Meena succumbed shortly after, as the referee deemed him unable to continue. The technical knockout finish earned Khan his fourth straight victory.

Singapore’s Tiffany “Soul Crusher” Teo turned in another complete performance, dominating the United States’ Rebecca Heintzman-Rozewski over three rounds to claim victory in front of her hometown crowd. Teo used her accurate striking to tag Heintzman-Rozewski repeatedly with left and right hand combinations while threatening with various submissions on the ground. All three judges judges scored the bout in favor of Teo who wins by unanimous decision.

Thai-Japanese female atomweight prospect Rika “Tinydoll” Ishige returned to the ONE Championship cage against Indonesian wrestling champion Nita Dea, and her performance certainly did not disappoint. Ishige once again proved her mettle on the ground with another technical grappling showcase, catching her opponent in two armbar attempts, ultimately winning by rear naked choke midway into the first round.

Unbeaten Chinese prospect “Rock Man” Chen Lei and Indonesian national grappling champion Jeremy “Predator” Meciaz kicked off ONE: DYNASTY OF HEROES in exciting fashion, blasting each other from the opening bell with wild punches. Both men wasted no time in going to battle at the center of the cage. With the two fighters spent after just a few minutes of action, it was Chen who came away with the win via referee stoppage in the first round.

Official results for ONE: DYNASTY OF HEROES

Welterweight bout: Zebaztian Kadestam defeats Luis Santos by Knockout at 2:18 minutes of round 3