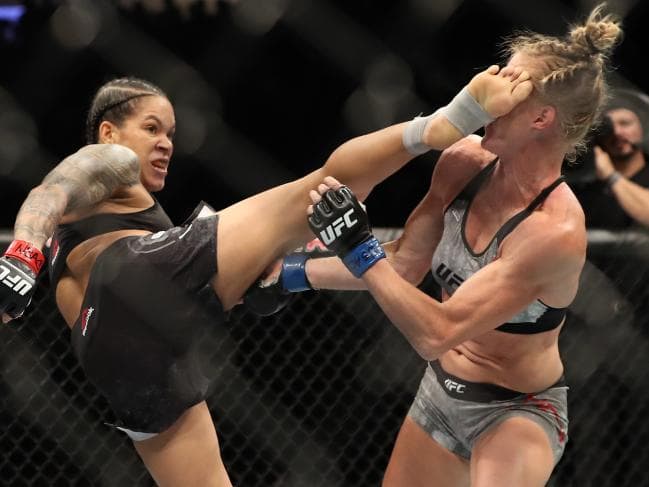 Holm came out using her kicks to stay at range, but Nunes started to find a home with her hands. After a couple of stinging punches, Nunes landed a sensational counter head kick that sent Holm falling to the floor. The champ came diving in with ground strikes, and by that time the referee had already seen enough and was on his way to stopping the fight. Nunes has defeated every single fighter to ever hold the UFC women’s bantamweight belt, and oh yeah... she is simultaneously holding the UFC women’s featherweight title as well.

Where do these two go from here?
Amanda Nunes has kind of done it all already. There really isn’t a challenger out there that poses much of a threat. She could always run it back with Cris Cyborg, if the former champ gets past Felicia Spencer at UFC 240. Sure, it would be the biggest possible draw for the two, but Nunes already knocked her out, so what’s the point? She could always rematch the last woman to defeat her, Cat Zingano, but Zingano isn’t exactly sitting in title contention having lost four of her last five. I guess the winner of Germaine de Randamie vs. Aspen Ladd would be next in line at 135-pounds. In a perfect world, Nunes would retire on top after this impeccable run and her legacy would forever be revered as a perfect example of MMA excellence. It would be refreshing, however unlikely.

Holly Holm is really really good, despite losing five of her last seven. Those five losses came at the hands of Nunes, Cyborg, Germaine de Randamie, Valentina Shevchenko, and Miesha Tate. ALL OF THEM HAVE BEEN UFC WORLD CHAMPIONS. Holm’s win over Megan Anderson showed that she is still one of the very best in the world and will still give a lot trouble to most of the UFC’s female roster. Her facing the upcoming loser of GDR vs. Aspen Ladd makes a lot of sense. Perhaps a bounce-back fight with Cat Zingano could be a thing.

Watch now, later, or never?
Watch this now! Amanda Nunes is the female G.O.A.T. and this head kick knockout of Holly Holm is just further proof of her dominance. SHE KICKS HER SQUARE IN THE FACE!