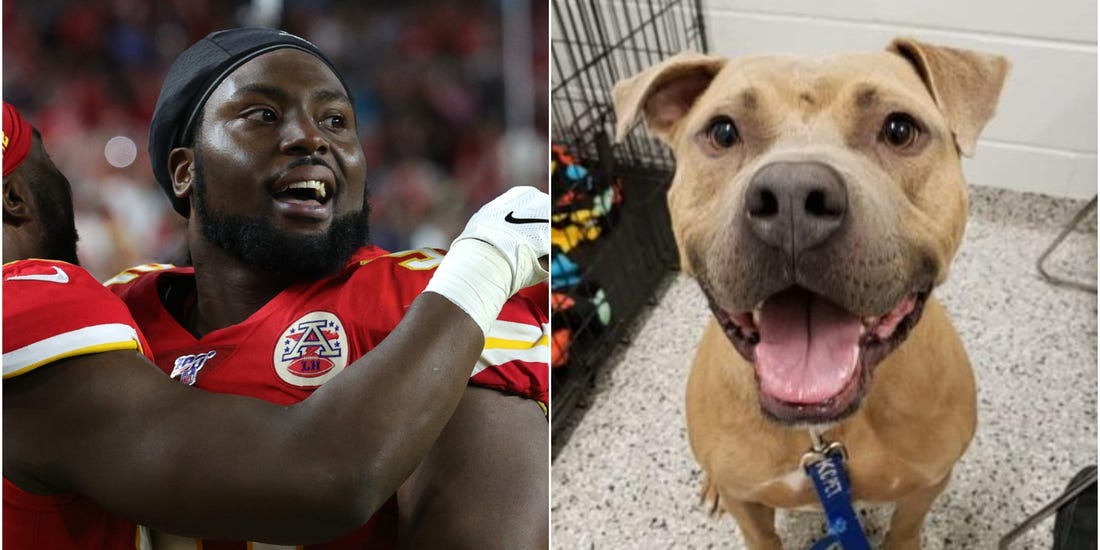 More than 100 dogs in the Kansas City area found new forever homes last week. They can thank the Chiefs’ Super Bowl comeback for that.

Kansas City defensive lineman Derrick Nnadi used his Super Bowl 54 victory as the impetus to pay off adoption fees for 109 shelter dogs in western Missouri. Nnadi partnered with the KC Pet Project to help clear one of its locations entirely — a donation through the non-profit Derrick Nnadi Foundation that clocked in at a total of $18,600.
Nnadi put the thrill of his philanthropy right next to the rush of winning a Super Bowl when he talked up his five-figure donation on Instagram:
This week has been truly special for me, not only did I win my first ever Championship, I also helped over 100 dogs find their forever homes. Yesterday the Derrick Nnadi Foundation celebrated all of the families, dogs, and amazing volunteers at the @kcpetproject. Sending all the love to the @nutrish team for donating a YEAR supply of dog food to all of the dogs that were adopted. And a special thanks to @chickennpicklekc, @threedogbakeryhq, and @modernmansupplyco for coming out and supporting the event. Hoping this is a good reminder to everyone to treat others the way you want to be treated and be the difference you want to see in the world

This wasn’t the first time Nnadi came to the rescue for local canines. Through his non-profit, he arranged to pay the adoption fee for a different dog each time the Chiefs won a game this season. That meant 12 re-homed pups in the regular season and then two more after Divisional Round and AFC Championship Game comebacks before Kansas City’s world championship win.
Nnadi earned a $107,000 bonus after a four-tackle performance in Super Bowl 54, but the two-year veteran is hardly one of the league’s richer players. His $936,400 average salary ranked 709th among all NFL players in 2019. He’s dedicated himself to reinvesting a chunk of those earnings in his community by ensuring the KC Pet Project had the means to make sure 109 dogs found new homes in February.

That’s awesome. And if you’re looking for a pup in the Kansas City area, follow this link and you can find all the other good boys and girls who are living good lives in the Pet Project’s other locations thanks in part to Nnadi’s big donation.