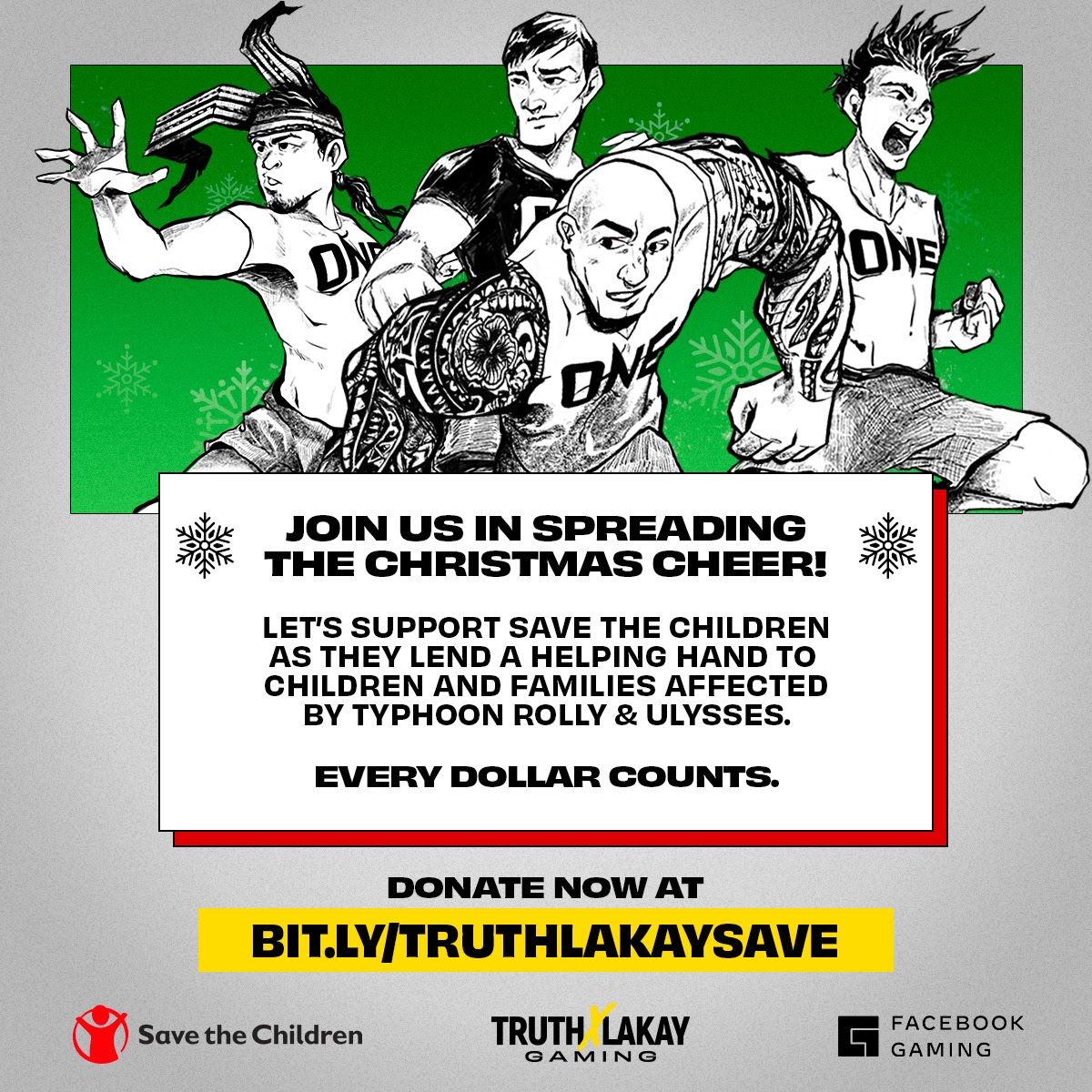 Since officially launching the “Truth x Lakay Gaming” official Facebook Gaming page of ONE Championship Filipino mixed martial arts heroes and World Champions, the following has grown immensely with thousands of fans wanting to witness their favorite stars play the most popular games of today.

It’s been a tremendous platform so far, and one that has been recently mobilized to raise funds for charity.

Launched on 2 December, ONE Championship and ONE Esports (who manages the page) partnered with Save the Children Philippines in a fundraising activity to help victims of the recent string of typhoons that ravaged parts of the country.

An official message on the page wrote:

“We are absolutely heartbroken to see the devastation brought about by Typhoon Rolly and Ulysses. That’s why we are joining Save the Children Philippines to raise funds for aid and relief. Join us on Sat, 5 Dec with two charity streams and stand a chance to win exclusive merchandise from ONE Esports when you make a donation! We will also be giving away 20% discount codes for shop.oneesports.gg/ to all donors. Watch us stream, and make a donation at bit.ly/truthlakaysave. Let us help where we can.”

Stars such as ONE Heavyweight World Champion Brandon “The Truth” Vera, ONE Strawweight World Champion Joshua “The Passion” Pacio, former champions Eduard Folayang and Kevin Belingon came together to live steam to raise funds to aid those affected by Typhoons Rolly and Ulysses that hit the Philippines in late 2020.

The country, which lies in the Pacific Ring of Fire, is subject to numerous natural disasters, including powerful typhoons, multiple times every year. The country welcomes support through all means, and this latest campaign has certainly leveraged its athlete star power.

“I think this is an amazing opportunity to give back to the people and the fans who have supported our careers,” said the 24-year-old World Champion Pacio.

“We are glad to be able to help where we can, even in our own small way. I’m sure the funds we’ve raised here will be of great use, and we’re looking forward to participating in more of these campaigns in the future. It’s important that we give each other a helping hand, especially in these difficult times. We’re willing to do what we can do for our fellow Filipinos.”

The campaign (https://donate.savethechildren.net/campaigns/truthlakay) has since shattered its Php 50,000 goal, raising over Php 55,541 currently with two days remaining in the two week donation drive.

Truth x Lakay Gaming is the official Facebook Gaming page of ONE Championship Filipino mixed martial arts heroes and World Champions Brandon “The Truth” Vera, Joshua “The Passion” Pacio, Eduard “Landslide” Folayang and Kevin “The Silencer” Belingon. Tune-in for the ultimate Mobile Legends showdown. Savage plays, legendary takedowns, unstoppable combos – you want it, they've got it. Brought to you by ONE Championship and ONE Esports, join the athletes as they #GameAsONE.

#GivingTuesday was created in 2012 as a simple idea: a day that encourages people to do good. #GivingTuesday kicks off the charitable season, as the International Day of Giving Back.  The day has gone global, with more than 200 community campaigns across the United States and national movements in more than 60 countries. It has grown into a global movement that inspires hundreds of millions of people to give, collaborate, and celebrate generosity.

#GamingTuesday is an initiative created to unify the gaming community and celebrate the International day of giving back by coming together to fundraise and help Save the Children give kids across the world a brighter future.

Videos streams from the Campaign: