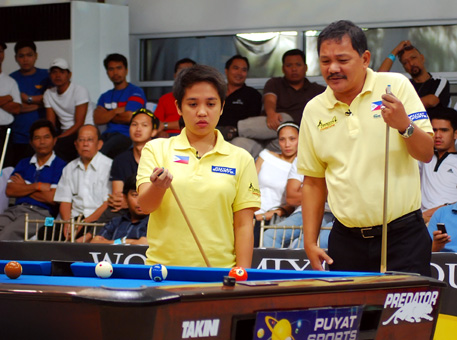 Rubilen Amit of the Philippines bucked a slow start to edge Siripaporn Nuanthakhamjan of Thailand 7-5 on Wednesday in the women’s 10-ball singles of the 30th Southeast Asian Games at the Manila Hotel Tent.Amit crawled out a 0-4 hole by winning the next three racks and sustained her momentum after a 5-all tie to advance to the semifinals.The multiple 8-ball and 9-ball SEA Games champion had a hard time with her breaks.

“Breaking in 10-ball is not really my strength,” Amit said. “And I’ve been concentrating on 9-balls lately.”

Al Shajjar and Mengorio advanced to the quarterfinals at the expense of Indonesians Dhendy Krhistanto and Putu Edi Wirawan 3-1 on Tuesday night.Carlo Biado and Johann Chua, along with the other Philippine pair of Warren Kiamco and Jeffrey Ignacio were gunning for an all-Filipino final in the men’s 9-ball doubles.Chezka Centeno was also battling Sukritthanes Waratthanun in the 10-ball singles quarterfinals as well as Alvin Barbero and Jefrey Roda in the men’s snooker doubles. MST Sports