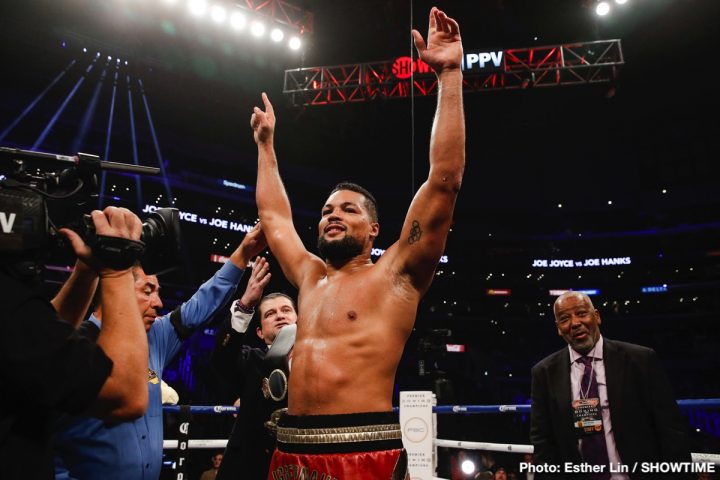 Here are the WBA’s new top 15 rankings for heavyweight:

For the boxing fans that take issue with the 6’6″ 260 pound Joyce getting ranked so high after seven fights as a pro, he’s put together a string of victories over solid opposition in beating Joe Hanks, Iago Kiladze and Lenroy Thomas. Those are all good B-level heavyweights in the division. It’s not for that reason alone that Joyce has elevated to #5 by the WBA. It’s the way that he’s looked in beating those type of heavyweights.

Joyce has been knocking out everyone he’s faced, and looking very impressive. Right now, Joyce is putting in the best performances in the weight class when it comes to the contenders. Dillian Whyte and Jarrell ‘Big Baby’ Miller haven’t been looking nearly as impressive as Joyce has recently. Since bulking up a little in going from 250 lbs to the low 260s, Joyce is looking a lot more powerful, and displaying improved punching power in each fight. Since adding weight, Joyce has blown out Iago Kiladze in five rounds, and Hanks in one round.

Joyce would like to fight Dillian Whyte and Dereck Chisora, but those two are not likely to agree to fight him. Joyce is a serious threat to any of the contenders in the division. He might have a better chance of getting a fight against the highly ranked former world title challenger Luis ‘King Kong’ Ortiz.

Joyce lost to France’s Tony Yoka in the final of the 2016 Olympics at super heavyweight. Many boxing fans felt that Joyce deserved the victory over Yoka, as he took the fight to him and wore him down. The judges seemed to ignore the powerful body shots that Joyce was nailing Yoka with, and they focused more on the head shots. Since the two of them have turned pro, Joyce has looked a lot better, and more suited to the professional style of fighting.