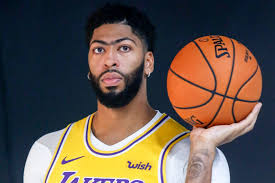 Anthony Davis made history by capturing the NBA Championship with the Los Angeles Lakers on Sunday because in doing so, he became the first player to complete what fans in America could view as the grand slam of basketball.

No player before Davis had won the FIBA Basketball World Cup, an Olympic gold medal, the NCAA title and the famous Larry O'Brien NBA Championship Trophy.

Davis spearheaded the University of Kentucky's drive to the NCAA Championship in 2012, when he was named the NCAA Final Four's Most Outstanding Player.

Just a few months later and he played for the American team that claimed gold at the London Olympics, while two years after that, Davis helped the USA dominate at the FIBA Basketball World Cup in Spain.The 2.08m (6ft 10in) center averaged 12.6 points and 6.6 rebounds as the United States won all nine of their games.

Now, following the Lakers' 106-93 win over the Miami Heat in Game 6 on Sunday, Davis is an NBA champion for the first time.

Many of America's legends, and some of the sport's current superstars, have won three of the four, including Kevin Durant and Kyrie Irving, the MVPs of the FIBA Basketball World Cups in 2010 and 2014, respectively. Durant has won two Olympic (2012, 2016) gold medals, one World Cup and two NBA championships (2016, 2017) with Golden State.

Irving followed up his World Cup title with the USA with the 2016 NBA championship in Cleveland and the Olympic title just a few months later. However, neither Durant (Texas), nor Irving (Duke), won NCAA crowns.

Similarly, Andre Iguodala won the world title in 2010, the Olympic gold medal in 2012 and then three NBA crowns but he came up short of the NCAA championship in his days at Arizona.

Alonzo Mourning reached the top of the World Cup podium in 1994 with the United States, won Olympic gold in 2000 and became an NBA champion with the Heat in 2006 but he never won an NCAA title at Georgetown.

USA's Shaquille O'Neal reached the top of the podium at the World Cup (1994) and Olympics (1996) and won four NBA titles but didn't get an NCAA Championship in his three years at Louisiana State University.Another American, Steve Smith had an impressive career, winning the world title (1994), Olympic gold (2000) and the NBA title (2003) but not the NCAA championship during his time at Michigan State. It should be noted, however, that Smith also won the World University Games in 1989 and the FIBA AmeriCup in 1999.

Bill Russell and KC Jones won two NCAA championships with the San Francisco Dons, Olympic gold medals in 1956 with the USA and numerous NBA titles with the Boston Celtics. They did not compete in a FIBA Basketball World Cup, though.

USA's Quinn Buckner (Indiana) was in 1976 an NCAA and Olympic champion, and in 1984 he was an NBA champion. The USA team he played for at the World Cup in 1974 in Puerto Rico came in third.