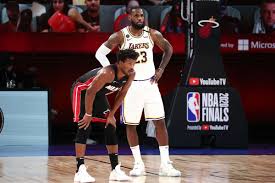 The Miami Heat got their heart and soul back, but couldn’t revive the Jimmy Butler game they needed to draw even in the NBA Finals.

In fairness to Butler, the Los Angeles Lakers wouldn’t let Butler have that game again in Game 4, as they held him in check offenisvely for most of the night and then pulled away late for a 102-96 win and a 3-1 lead in the series.
The Lakers, whose defence has been top tier all season, managed to keep size on Butler most of the evening and while Butler did make his first five shots, he missed his nine of his final 12 as the Lakers managed to keep one of their bigs on him for most of the second half.

Whether it was LeBron James, who was on Butler a lot all night, or Anthony Davis, and barring that Markieff Morris, Butler was rarely going into the paint without a bigger Laker on him.

It didn’t just keep Butler’s scoring numbers down, it kept his attempts down, limiting him to just 20 points on 7-of-15 shooting. Butler, who lived at the free-throw line in the Heat’s Game 3 win earned largely on his own 40-point triple double, had just seven free throw attempts all night.The Heat, though, stayed in the game based largely on their defence, which was really good through three quarters before a bit of a fourth-quarter fallback.

The Lakers were led offensively by James, who had 28 points.They also got significant contributions from up and down the lineup, with Kentavious Caldwell-Pope chipping in with 15 points, nine from Morris and Danny Green, and seven from Alex Caruso.

Anthony Davis avoided the foul trouble that had him so tentative in Game 3 and rebounded with a 22-point night, including a last-minute three that basically sealed the deal for the Lakers.

But it was Caldwell-Pope in the final handful of minutes who ensured the Heat weren’t going to bring this one back to even.

With three minutes to go, Butler had a chance to take the lead with a three-pointer but had it hit iron and bounced out. The Lakers, after a James rebound, went right back the other way and got a three-pointer from Caldwell-Pope, his third of the night, to take a five-point lead.

Caldwell-Pope then extended the lead to seven as he used his speed to run past Duncan Robinson and lay one in.

Game 5 goes Friday as the teams get their first extra day between games since the series began.