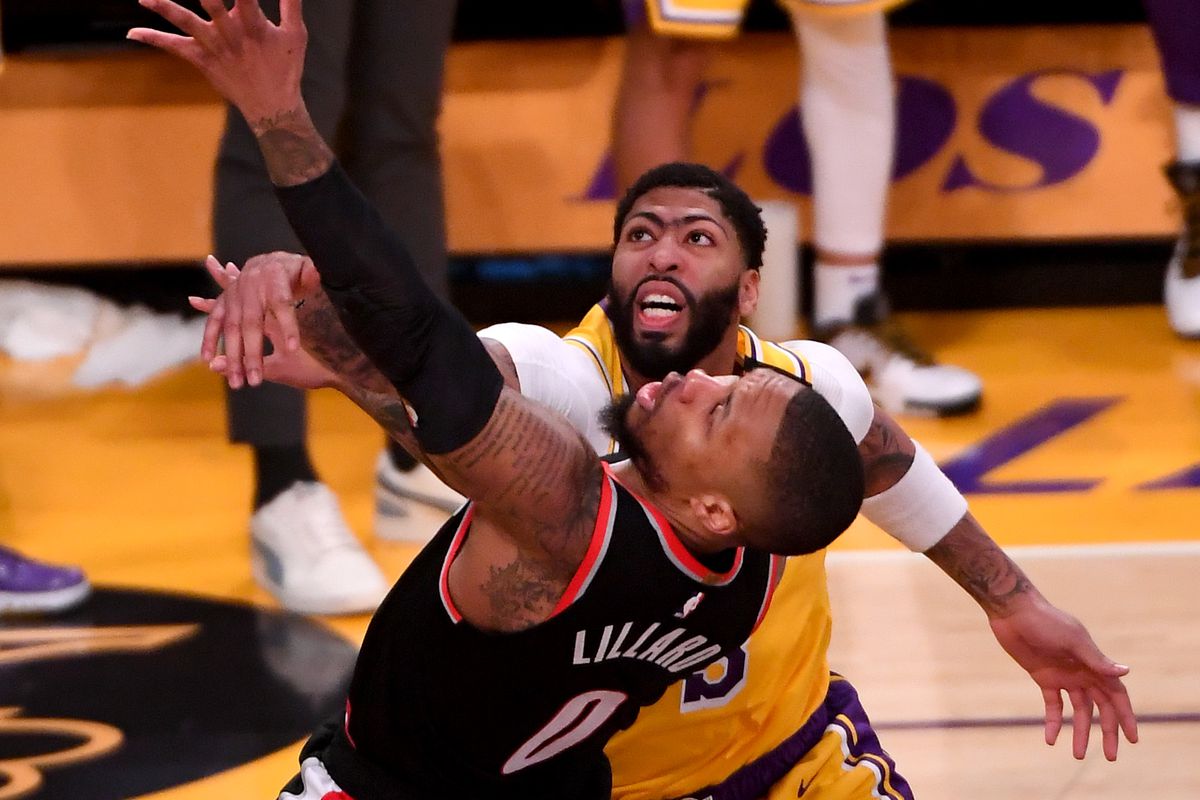 The Portland Trail Blazers walked away from the first game of their 2020 NBA Playoffs matchup with with Los Angeles Lakers carrying a 100-93 win and a shiny, 1-0 lead in the series. Amid the celebration and hopes for continued success, here are several observations from the game.

This Was a Disaster for the Lakers
Losing the first game of a series is never good. LeBron James has enough experience that a single loss will not rattle him, no matter the circumstances.

How the Lakers lost might be of concern, though. Their formula for winning was simple:

Keep the game in the 90’s or 100’s, preventing Portland from scoring 120
Dominate the boards
Get easy buckets
Bonus: Press the “star” advantage at the foul line
They actually did most of those things.

The “easy buckets” part was more mixed. The Lakers generated only 9 points off of their offensive rebounding advantage, edging the Blazers by just 3. Fast break points went to L.A. 15-10. That’s not sterling, but good enough. Points in the paint were lopsided, 50-28 for L.A.. The Blazers were +5 in points from the foul line, but that was the only flaw in the plan.

Add in Portland shooting a relatively-average 38.2% from the arc, and on paper, this game should have gone to the Lakers. They got almost everything they wanted, yet they lost.

It’s one thing to say, “We didn’t play our game and we paid for it.” Playing your game and still coming up short is another thing altogether.

The final moments of the contest were particularly egregious for L.A.. The Blazers owned crunch time. It became their Big Moment. The Lakers are supposed to be the team strutting their way through showtime while Portland scraps to steal a victory out from under them. Last night, those roles were reversed.

Let’s not even talk about the utter incompetence of the final possessions, where LeBron passed to chronically inept shooters, embroiling his team in a de facto three-point contest with the Blazers. Portland only has a few clear edges in this series. The arc is their #1 advantage...circled on the whiteboard with flashing neon lights around it. Facing them shot for shot was the equivalent of a scraggly-chinned 14-year-old challenging James Harden to a beard-off. Failing to foul as the Blazers ran down clock in the final minute was the icing on the extremely sucky cake.

The Lakers can claim that this was just one loss, that they’re experienced and not rattled. There’s truth to that, but they can’t gloss over the seedy underbelly of this performance. They’re not going to be able to walk into Game 2 with the same energy, else they’ll risk a repeat. The Lakers don’t just need to recapture the scoreboard, they need to recapture the swagger, poise, and purpose Portland stole from them in the fourth quarter.

Right now the Blazers are the Showtime favorites, while the Lakers look like a questionably-competent, low-resolve team scrapping to find a way to win. Their star-powered squad can’t live with that kind of culture shock. They aren’t built for it. If they’re going to win the series, let alone a championship, the Lakers have to shift the perception immediately and dramatically.

The Tale of Two Stars
The Lakers field a supposedly-insurmountable frontcourt of James and Anthony Davis. LeBron had a triple-double last night with 23 points, 17 rebounds, and 16 assists. Davis scored 28 with 11 rebounds. The two were not the same, and the difference goes beyond the obvious 9-20 clip for James versus 8-24 for Davis.

LeBron didn’t play a perfect game, but he was dominant. Case in point: Gary Trent Jr. gives up a few inches and significant tonnage to James. The only advantage Trent Jr. has in the matchup is quickness. Yet when GTJ guarded LeBron last night, James got by him, contact-free, with regularity.

Blazers fans will remember Davis from the shellacking his New Orleans Pelicans gave Portland in a first-round sweep in the 2018 NBA Playoffs. He loomed like a giant, with moves like butter. Last night Davis had all the mobility of a butter churn. His game wasn’t explosive and his defense wasn’t decisive.

If Davis becomes just another player—albeit a high-scoring one—this matchup ends up being LeBron against the Blazers. Portland is probably going to win that. The only exception is if James decides to shrug off all his teammates and put on an otherworldly, series-deciding performance, which he still has the capability of doing.

In the process, LeBron will have to determine whether Davis is stepping up enough and, if not, how much he dares to take over the franchise over AD. That murky cultural issue could well cast a shadow over this series.

There’s a distinct possibility that the Lakers spend the postseason not answering that question. If they do, the Blazers won’t be the only team with a legitimate chance to beat them.

Three-Pointers
L.A. shot 5-32, 15.6%, on three-pointers last night. They’re not a strong three-point shooting team, but they’re not that bad.

Even with everything we just said, had they shot 7-32, this would have been a wholly different game. At that point James would have more options in the final possessions. as his unstoppable ability inside the arc would come into play. It wouldn’t have solved L.A.’s issues, but it might have given them the win despite them.

That means Portland can’t rest on their laurels. The Lakers are vulnerable, but they’re not even close to out. If L.A. keeps approaching the playoffs like they did last night, somebody is going to beat them. That doesn’t mean it’ll be the Blazers.

Does Dame Have Any Limits?
Once again, a Portland game turned on Damian Lillard’s ability to hit a three-pointer from crazy range.

I understand the devastating effects of such buckets on the morale of the opponent, and conversely its boost to the Blazers. To a lesser extent, I understand why defenses would stretch to cope.

Here’s what I don’t understand: Opponents know Dame can do this. They can’t be surprised it’s coming. Nor can they reasonably prevent it without giving up the interior.

Given that these shots are within the realm of possibility, why don’t opponents pick their jaws up off the floor, chalk up the three points, and dare him to do it again? As good as Lillard has been from that range—and his percentages are phenomenal—chances are better that his next shot will miss than that it go in. As soon as he does miss a couple, now those looks seem cavalier—maybe stupid—instead of helpful.

An opponent could reasonably live with the Blazers trying to win with 36-foot shots, even if Lillard is attempting them, better than they could live with the defensive cost of trying to stop him out there. As devastating as Dame gets in those moments, the best response to those huge launches just might be saying, “Nice! You made one! Now make three.”

Hassan Whiteside
Don’t sleep on Hassan Whiteside’s 5 blocks last night. Shutting down the interior disproportionately affects L.A.’s game. That’s where they want to score. Even though his individual defense is suspect, if Whiteside can send away shots in the middle, it shifts the balance away from LeBron-AD towards LeBron-Kyle Kuzma. That may actually prove more problematic for Portland to stop, but in the abstract, it’s a huge deal.

(P.S. Watch for Kuzma to take a much bigger role in this series.)

Carmelo vs. Aminu
Portland’s defense was better when Al-Farouq Aminu and Moe Harkless started at the forward positions than it is with Carmelo Anthony and [insert a non-injured forward here]. The Blazers were probably a better team with the old starting lineup, pound-for-pound. Even so, the Blazers have a chance to push past the “glass ceiling” they always seemed to encounter with the Aminu-Harkless tandem because of one factor: Anthony can hit an open three. Carmelo’s ability to convert the critical bucket means the Blazers only need to be within a few points to have late-game possessions matter, rather than needing to be six points ahead so the inevitably-missed threes don’t hurt them.

Carmelo’s ability also opens up the floor for Portland’s guards, making the Blazers a dangerous all-around offensive team in crunch time instead of a team with transcendent stars and a shaky bail-out alternative.

Strategies
The playoffs are like a chess match. Both teams employed interesting strategies last night:

The Blazers leaked out on the break early in the game, trying to score in transition behind the Lakers’ defense. Likely they figured they were going to lose offensive rebounds either way, but that they could nullify L.A.’s potential advantage in second-chance points by scoring easy buckets on the run themselves. It more or less worked too.
Dwight Howard appeared to be going at Jusuf Nurkic hot and heavy, trying to wear him down physically. Likely that was less about the moment than about fatiguing Portland’s center so he wasn’t able to finish the game strong. If so, that was a brilliant use of Howard’s physicality.
The Blazers appeared to be setting up the third quarter for CJ McCollum, as the ball stayed in his hands more consistently during that frame. The aesthetic quality of their play trailed off a bit, but CJ scored in isolation and the Blazers emerged from the often-devastating period with a two-point advantage. Keeping McCollum involved was essential. The actual points proved critical as well.
The Blazers helped themselves by doubling Davis whenever LeBron left the floor. That was an awesome adjustment. They dared anyone else to beat them. None of the Lakers could.
The Lakers tried to take advantage of Portland’s backcourt defense as the game wore on. Look for them to do the same earlier in Game 2, exploiting the mismatches they create off of screens. L.A. took too many jump shots over guard defenders, all but nullifying their height/weight advantage. They’ll want to back down Portland’s guards and/or drive for the and-one.
LeBron’s commitment to finding open shooters made some sense overall, even if it proved wholly inadequate in the game’s closing moments. L.A. was likely counting on offensive rebounding to create two attempts out of their corner threes: the original shot and the put-back off of the carom. As it happened, they ran into a big flaw. With so few of those looks falling, it didn’t make any sense to kick back the ball for a three off of the offensive rebound. This allowed Portland to pack the paint and prevent offensive rebounders from getting any kind of look at the bucket. That’s how 17 offensive rebounds turns into just 9 points for L.A. The strategy may still be sound, though. Watch for the dynamic to change if and when the Lakers’ guards start connecting from distance.
LeBron pretty much has to give the same, unselfish approach a try in Game 2, but I expect the leash to be shorter. If Danny Green, Kentavious Caldwell-Pope, and Davis can’t hit open catch-and-shoot threes, look for James to wheel to the bucket instead. That approach actually worked for them in Game 1. They just didn’t use it enough to make a difference.
What observations did you find important that we didn’t cover? Share in the comments.