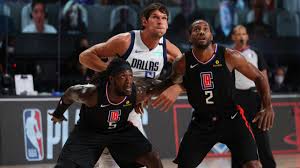 The Dallas Mavericks have won their first playoff game since the close of the Dirk Nowitzki era. In game two in their match up against the Clippers they never once trailed, winning 127-114. Luka Doncic scored 28, grabbed eight boards, and handed out seven assists in victory. Kawhi Leonard was the high point man for the Clippers with 35 in defeat.

The Mavericks came ready to play in game two, starting with a thunderous dunk from Maxi Kleber off a pass from Luka Doncic. Dallas would go on to build a 15-2 lead in the opening minutes, with Doncic leading the charge. The Clippers responded via their bench, with Lou Williams getting the first of two “and ones” in the quarter, with Montrezl Harrell following suit with one of his own. Briefly, the Dallas bench, led by Trey Burke, extended the lead again, but the Clippers rallied to close the period. Dallas led 29-25 after 12 minutes of action.

Boban Marjanovic gave the Mavericks an early boost to start the second quarter with some nifty moves and dunks to help Dallas build a 15 point lead early in the frame. But when Luka Doncic exited the game, the Clippers mounted a quick comeback, going on run to cut the lead back to single digits. Los Angeles attempted a 1-2-2 zone at certain points to get the Mavericks off their rhythm some, but Dallas mostly handled pressure, including an awesome Porzingis Euro-step drive to his left for a lay in. Doncic again led a consistent Dallas attack on offense but the Clippers matched them basket for basket. The Mavericks actually had a chance to take a larger lead into the half but Doncic missed three free throws down the stretch. Dallas led 61-56 at halftime.

Luka Doncic picked up his fourth foul of the game early in the quarter and for a moment, the entire game seemed in peril despite a Mavericks lead. Doncic petitioned Carlisle to stay in and the Mavericks kept scoring. Despite some wild miscues by the Mavericks in the quarter, every time the Clippers would inch closer, Dallas would answer with a shot from guys like Tim Hardaway Jr. and Dorian Finney-Smith, each of whom hit huge threes in the quarter.

Then something strange happened: when Luka Doncic took his place on the bench for the rest of the quarter and Dallas just up by three, the Mavericks’ bench unit went on a run. Led by a Seth Curry flurry, some Porzingis free throws, and Trey Burke, Dallas managed to take a 98-85 lead into the final quarter.

The fourth was every bit as hectic as it felt. Luka Doncic picked up his fifth foul following an awful turnover from Delon Wright. But as in the third quarter, the bench unit held and even extended the lead to 18 points on a variety of baskets from Maverick players. Then things went haywire, with the Mavericks up 18 with just under five minutes. The Clippers went on a run, cutting the lead to 10 with three and a half remaining. But the Los Angeles offense went cold again and Dallas caught some lucky breaks in the final three minutes. Dallas extended the lead on made shots and free throws as they tried to milk shots. The Dallas Mavericks never trailed, won 127-114, and we have a tied series after two contests.

The Mavericks’ bench came up huge when it mattered most
Of all the things one might hope for in a Dallas playoff game, a 47 point outburst from the Dallas bench was low on my list. There’s a lot to say about this group and we’ll do just that later tonight or tomorrow, but the Mavericks won tonight in large part because of Boban, Trey Burke, and Seth Curry.

Maxi Kleber with a confidence building game
Josh Bowe noted today that the game one adjustments with Maxi in the starting line up did not work in game one. It’s safe to say that things went much better in game two, with Maxi playing better on both sides of the ball. It’s also safe to say that Kawhi Leonard missed some shots, but Maxi’s contributions in a team setting were as important as his defense.

Some things go Dallas’ way for once
In the big picture, a team that has Luka Doncic and Kristaps Porzingis has had plenty go their way. Yet I feel as if this team might be better than their record despite how much I complain sometimes. There are so many games where if one or two possessions went differently, they win.

It’s amazing that the Mavericks missed ELEVEN free throws and won the game. It’s bananas that the Clippers missed nine of their own along with missing 24 shots from distance. It’s heart attack inducing that Dallas allowed the Clippers to score 8 points in 80 seconds, making it a closer game than it should have been and so freaking awesome that the Mavericks pulled out of what felt like a tailspin and got a huge victory.

THAT WAS AWESOME LET’S DO IT AGAIN FRIDAY.

Bonus item: Luka Doncic, record breaker
Luka Doncic is now second on the list of all time two game playoff debuts, scoring 70 in his first two games. He passed Kareem Adbul-Jabbar and is behind just George Mikan, who scored 75. We’re running out of things to say about Doncic and it’s just his second season.