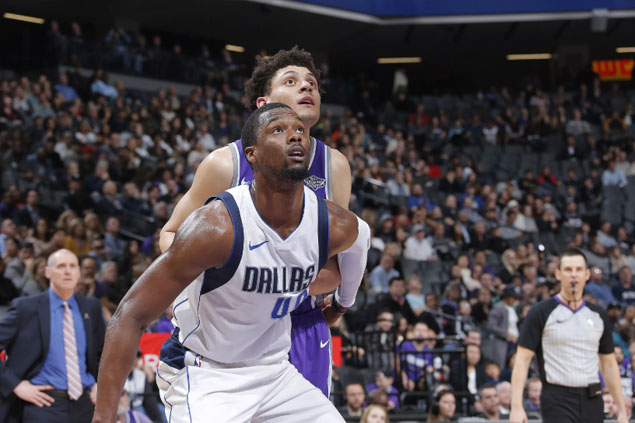 In July 2016, in the wake of Kevin Durant's decision to join the Golden State Warriors, the Dallas Mavericks offered free agent forward Harrison Barnes a four-year, $94 million deal -- and a bigger role than he had played since he was at the University of North Carolina. With a year left on that contract and his role reduced significantly, the Mavericks sent him to the Sacramento Kings on Wednesday in the middle of their game against the Charlotte Hornets. Barnes played 26 minutes knowing that a trade was a possibility, and it was completed before the fourth quarter, in which he sat on the bench supporting his ex-teammates, which got the attention of LeBron James.

Regardless of how you feel about Barnes and his $25.1 million player option, Barnes clearly fills a hole on Sacramento's roster. The Kings have been trying to compete for a playoff spot despite not having a big wing -- i.e. someone who can guard the Kevin Durant's and Kawhi Leonards of the world -- in the rotation. I don't care much for the distinction between shooting guards and small forwards in today's NBA, but I also don't think it's particularly fair to ask Buddy Hield or Bogdan Bogdanovic to take on that job. Before trading him to the Houston Rockets on Wednesday, it had fallen on the 6-foot-5 Iman Shumpert.

Barnes is an upgrade over Shumpert. He is a better shooter, and he is capable of defending power forwards. The question, as always, is how to properly value him. Barnes showed in Dallas that he could handle more responsibility than he had in Golden State, but he was never particularly efficient there. In Sacramento, he will not be on a super team, but he will not be asked to create a ton of offense. In a way, this is reminiscent of Trevor Ariza going from Los Angeles to Houston in 2009 and trying to expand his game, then dialing everything back when he went to Chris Paul's New Orleans Pelicans the next season. Going to the Kings should be good for him. I'm less certain that acquiring him will be good for Sacramento as it builds around its young core.

The Kings could presumably have trumped Chicago's package for Otto Porter. They could have tried to get someone like Wesley Matthews on the buyout market. There's nothing wrong with adding a helpful player like Barnes, but I'm not sure he moves the needle enough to justify giving up a significant portion of their cap space.

The counter-argument, of course, is that Sacramento has not typically been a free-agent destination anyway. In order to add players, the front office could have decided it must take advantage of opportunities like this. This is understandable, but let's see what happens with Barnes in the summer. According to ESPN's Adrian Wojnarowski, the Kings see this as a long-term play rather than a short-term rental. If he declines his option and re-signs with Sacramento, the terms of that contract will shape how this trade is viewed.

This trade gives Dallas real financial flexibility, an impressive accomplishment considering it took on the contracts of Tim Hardaway Jr. and Courtney Lee in order to get Kristaps Porzingis. The Mavericks could create a $21.3 million trade exception, per ESPN's Bobby Marks, which would be the largest in NBA history. By taking Barnes' player option off the table, they can try to add another core player in free agency, with about $30 million to spend.

In the short term, the team will miss Barnes. Jackson might be another 6-foot-8 forward who played at UNC, but he is still a work in progress, with a worryingly inconsistent 3-point shot. This was a big-picture move, though, and in that sense, it is hard to criticize. Dallas is building something new around Luka Doncic and Porzingis, and it no longer had Barnes in its plans. His contract made him tough to trade, but the front office found the right team at the right time. It would be wonderful if Jackson developed into a reliable 3-and-D guy, but even if he doesn't, the Mavs have done well here.