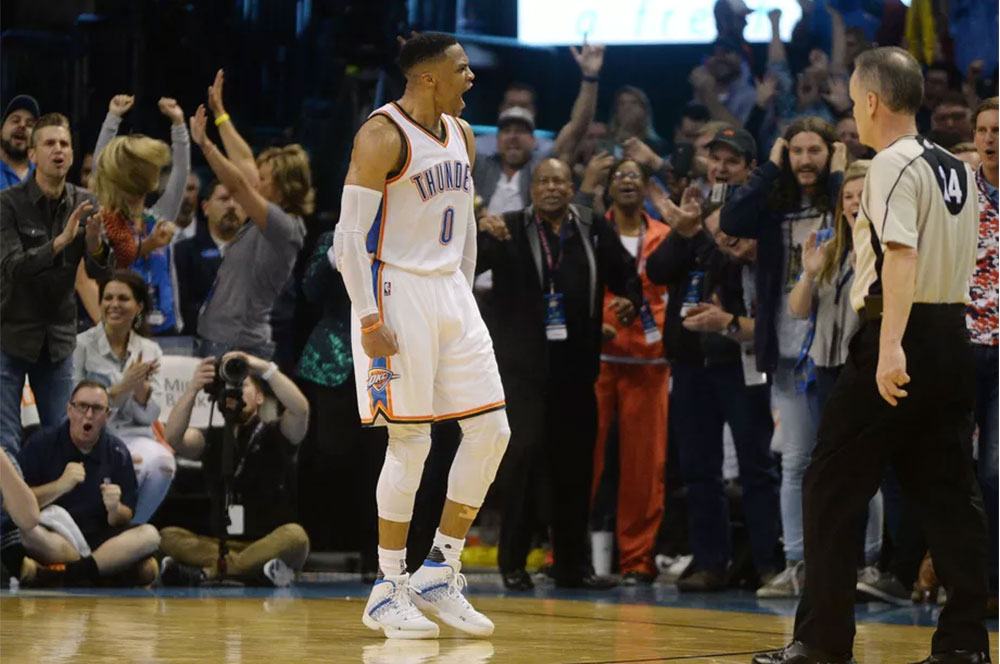 The Thunder is now 24-6 when Russ garners a triple-double performance.

Meanwhile, Oklahoma City began the contest 12-of-12 from beyond the three-point arc. This unexpected accuracy set a high-water mark for the Thunder. However, OKC regressed to the mean throughout the second half, as the Jazz’ gritty defense emerged.

However, Russell Westbrook assured this silence was short lasting.

The offensively-balanced Jazz were led by Gordon Hayward’s 19 points. Though five other Utah players, including Rodney Hood (18) joined the All-Star in double-figure scoring.

Russell Westbrook: Another sublime performance from perhaps the NBA’s next Most Valuable Player. Russ in the clutch was phenomenal. Following a rough fourth-quarter start, Westbrook defined the final 2:05 of play.

Three-Point eruption: It felt surreal to watch outside shot after outside shot fall for a Thunder team that’s struggled mightily from that area all season.

Alex Abrines’ outside shot: The rookie has owned the starting two-guard role for OKC since the break. Abrines’ floor-spacing abilities, and fearlessness are paying huge dividends for the Oklahoma City Thunder.

Foul shooting: In a recurring theme, OKC struggled from the charity stripe. During the playoffs, 16-of-23 FT shooting vs. a quality team will become a major liability.

Ideally, Norris Cole will provide certain elements at the back up PG position that Christon has not. The final 22 games will bear out that narrative.

The coalescing Thunder have a day off to enjoy their victory before beginning a three-game road swing Thursday night vs. division rival Portland.