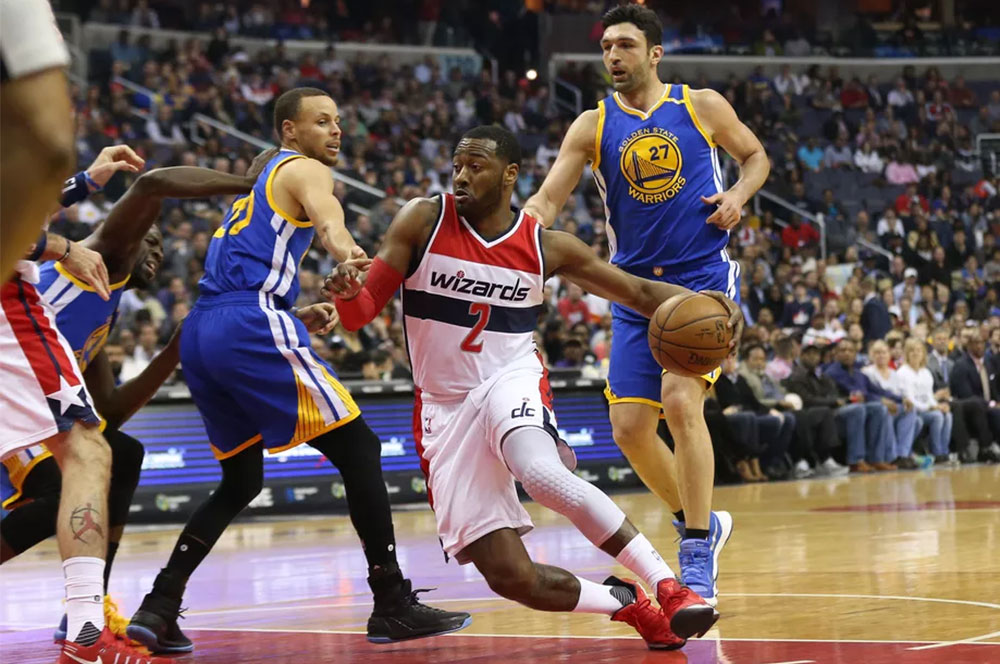 John Wall matched his career-high with 19 assists as the Wizards broke out of their post All-Star game funk with one of their best wins of the season. All five Wizards starters finished in double-figures tonight led by Bradley Beal with 25 and Markieff Morris with 22 as the Wizards closed out the Warriors 112-108.

There was a ton of hype leading up to this one and rightfully so. The Wizards waited until Golden State was in town before turning in their best first quarter of the season. Unfortunately, Kevin Durant injured his knee at the 10:27 mark of the first quarter and would be sidelined the rest of the game.

After some not so great starts in their past two games, the Wizards were on fire from the field connecting on their first four field goals and four of their first five three-pointers.

Then the Wizards went showtime on us with some nifty plays in transition to open up an impressive early lead.

Washington shot 62.5 percent from the field including 4-6 from three-point range as they took a 40-26 lead after one quarter.

The offense stalled out a bit in the second quarter but newly acquired Bojan Bogdanovic came to the rescue. He scored the first nine points of the second period for the Wizards, as the bench unit was able to keep the Wizards’ lead intact.

Washington had an opportunity to blow this one open but was very loose with the ball, turning it over 14 times in the first half. Turnovers aside, the Wizards still went into halftime up 12, 61-49.

You knew the Warriors wouldn’t go away and they got back in this one with a quick 10-0 run to start the third quarter. After trading baskets for most of the period, the game was all tied up going into the fourth quarter.

Washington started the final quarter ice-cold, missing 14 of their first 17 shots. But for every punch Golden State threw, the Wizards had a counter. Brooks went with the small lineup of Wall-Beal-Bogdanovic-Porter-Morris to match the Warriors small-ball lineup midway through the fourth quarter. Just like the third quarter, the teams continued to trade baskets in a quarter that featured three ties and 12 lead changes.

With the game tied at 108 with under a minute to go, Otto Porter gathered an offensive rebound off of a Wall miss and got fouled going up for another shot. Porter calmly knocked down the free throws to give the Wizards an 110-108 lead.

Washington had a minor hiccup on defense leaving Curry open for a split second, but he missed the deep three that could have given the Warriors the lead in the closing seconds. Markieff Morris grabbed the rebound and sank two free throws with 3.7 seconds left to seal the 112-108 win.

After an uninspiring start against Philly and a ho-hum start against Utah, the Wizards came out against Golden State guns blazing. Washington hit their first four jumpers of the game and seven of their first nine as they took an early 22-14 lead. Bradley Beal was 6-7 from the field for 16 points as the team dropped a season-high 40 points in the first quarter.

There were many highlights to choose from but this tic-tac-toe pass from Wall-Beal-Oubre for the dunk takes the cake.

Wizards make plays when it counts most

Washington made the plays to win this one when it counted most. The team struggled to score in the fourth quarter so they went back to their bread and butter. Wall continued to attack but didn’t get the foul calls he was looking for. However, this allowed guys like Gortat and Morris to crash the offensive glass for putbacks.

Plus, the Wizards were 10-10 from the free-throw line in the fourth quarter.

That’s how you close out games.

Bogdanovic provides the spark the Wizards were looking for

The Wizards lacked a scoring spark for the first half of the season and it looked like they may have found their guy to solve that problem, at least for now. Bogdanovic was the second-highest scorer in the first half with 12 points including the first nine points of the second period for Washington.

Bogdanovic ended the night with 16 points including going 3-6 from three-point range.