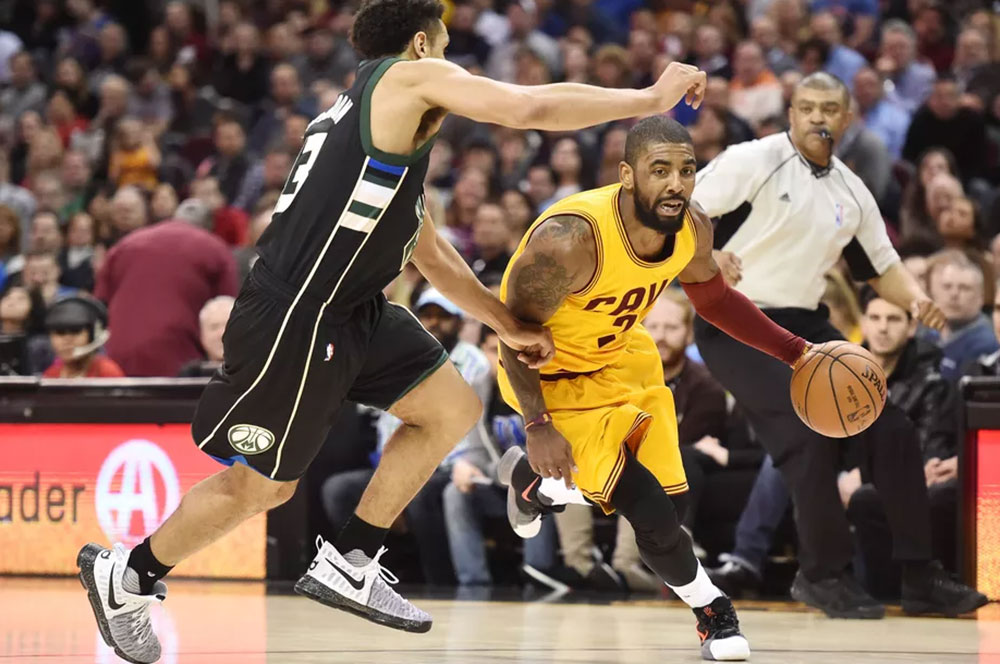 The Cavaliers held off several surges from the Bucks to get the win Monday.

The Cavaliers held off a pesky Bucks squad Monday night, as they captured a 102-95 win at home.

Just as they had all night, the Bucks hung around in the fourth quarter. After a Derrick Williams dunk set up by LeBron James, John Henson responded with a tough finish near the rim to make it 83-81. An Iman Shumpert triple from the corner made it 86-81, but once again Milwaukee closed the gap to one possession with another Henson bucket.

After Matthew Dellavedova made it 86-85, James blew by his former teammate and finished a ferocious slam through a foul. Following the made free throw, the Cavs led 89-85. A pair of Kyrie Irving baskets including a rather saucy 3-pointer, the Cavs led 94-85. Then on the next possession, Irving continued to frustrate the Bucks, as he drove the lane and kicked it out to an open Derrick Williams for a corner 3-pointer to boost the Cavs lead to 97-86 with 2:38 left in the game.

Irving led the way for Cleveland Monday, scoring 25 points on 10-20 shooting while dishing out nine assists. Not to be outdone, James compiled a double-double with 24 points and 10 rebounds in addition to his six assists.

Conversely, the Bucks’ star struggled all night. The Cavaliers refused to let Giannis Antetokounmpo get free for any easy looks, and it resulted in him scoring just nine points on 4-13 shooting.

Several possessions the Williams triple, the Bucks cut Cleveland’s lead to just 100-95, but with just 0:17 to go, it was too late. Irving iced the game by making a pair of free throws.

Milwaukee came out of the locker room firing to start the third. After two three-pointers from Thon Maker and one from Malcolm Brogdon, the Bucks led 61-54. The Cavs starting the quarter with four missed shots and a turnover didn’t help matters for Cleveland.

However, as quickly as Cleveland dug itself a hole, the Cavs dug themselves out. Led by Irving and James, the Cavs reclaimed the lead with a 15-2 run. The two combined for 13 points and one assist during that run. An 8-2 run for the Bucks tied things back up before Irving found Kyle Korver for a 3-pointer that gave the Cavs a 74-71 lead.

Derrick Williams closed out the roller coaster third quarter by sinking a bomb from 34 feet to give Cleveland a 77-73 lead heading into the fourth.

Williams continued to prove his value for the Cavaliers, as he once again brought plenty of energy on both ends of the floor. He did a really good job of getting open and being ready for a pass to finish easy looks. Korver also had major contributions off the bench, as he poured in 13 points on 5-11 shooting from the floor.

Tyronn Lue went with the Cavs’ jumbo lineup to start the second quarter. Cleveland got quite a few decent looks from 3-point land early in the second, but it had trouble converting them. As they often do, the Cavalier’s offensive struggles followed them to the defensive end of the floor in the second. At one point the Bucks, held a five-point lead at 40-35. It did not stand long, though, as Cleveland went on a 14-2 run resulting in a 49-42 lead over the span of about five minutes.

The Bucks closed the half on an 8-3 run to draw within two After Irving threw the ball away for a backcourt violation, Tony Snell hit a 3-pointer to punctuate the Bucks mini run with just one second left, and the Cavs went into halftime leading just 52-50.

The end of the first half wasn’t exactly ideal for the Cavaliers, but there were some positives to take away from the first 24 minutes. Cleveland made things difficult for Antetokounmpo, as the Greek Freak scored just four points on 2-7 shooting in the first half.

The Cavs went small to start the game, starting Richard Jefferson at power forward. The move paid off, as RJ scored nine of the Cavs’ first 15 points. The other six came from James, who had clearly recovered from his case of strep throat.

Offensively, it was a bit of a mixed bag for Cleveland early on. When things were going well, the Cavs moved the ball crisply and decisively. However, the Cavs got out of rhythm around the five minute mark in the first, as turnovers began to pile up. The Bucks capitalized on Cleveland’s mistakes, as the Cavaliers’ seven first quarter turnovers were one of the main reasons the Bucks erased the 11-point lead the Cavs held at one point.

Despite the turnovers, the Cavaliers went into the second quarter leading 27-25 after Irving drilled a step-back jump shot from the elbow as time expired.

Cleveland will be back on the floor Wednesday in Boston when they Cavaliers take on the Celtics.